It has been almost a year since I posted anything about the chess program I run at Archer Glen elementary here in Sherwood. We just kicked off tournament season and had a warm-up session last week during school with the two other Sherwood elementary schools at the local YMCA. Chess is a big deal in Sherwood, largely through the efforts of Jack Weeks, retired school counselor who initiated the chess programs in the local schools. It therefore seemed appropriate to award the Jack Weeks Challenge Cup to the school that wins the tournament each year. 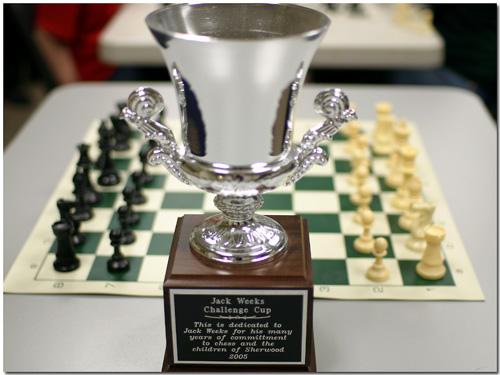 I ran the tournament team swiss style and we managed to squeeze in seven rounds between 9am and 2am. I was only able to attend until about 10:45am, but we had more than ample adult support on hand to keep things running smoothly. Jacob and Matthew both had solid days, scoring in the 3-4.5 point range. One of Jacob's best games was a match against Hopkins Elementary's best player - you can see the endgame below where they squared off with K/R and two pawns each. Jacob got his rook lured into a trap in the back corner and lost it, leading to a loss in a well-spirited game. 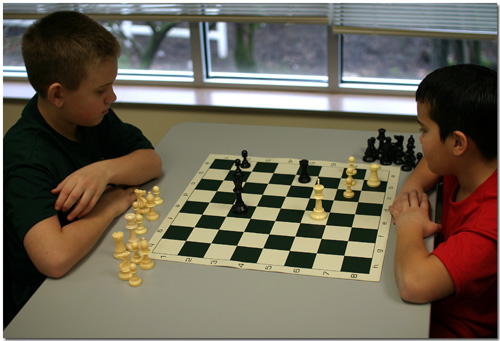 Matthew did very well and finished in the top 3 for third graders. This is his third year playing in the tournament circuit and should be a powerhouse by the time he hits the fifth grade. 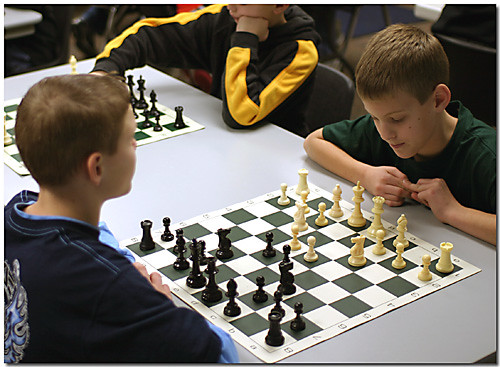 Archer Glen pulled out the team victory as well as the top 2 individual players. This coming Saturday is the big regional Chess for Success tournament. If we can pull out a 1st or 2nd place at regionals then we'll advance to the state championship.