Julie and I attended a SimplyFun party last Friday night at Eric's house, with Mike Deans providing the consulting power. I didn't expect to see much new but I did want Julie to experience one of these parties (she missed mine). Plus, well, it was an excuse to hang out with friends and play games.

We started out with a game of Handy. I'm generally a big fan of dexterity games, but this one just doesn't do it for me. It is the type of game you play through a round and say "Oh, I get it. Can we play something else now?" 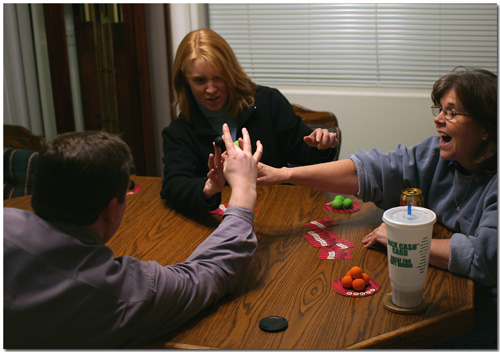 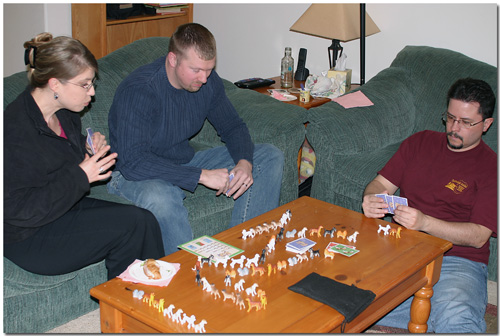 we gave the new(er) game Texas Roll'em a try. This is a Richard Borg design and derivative of the classic Liar's Dice (which is itself derived from Perudo). The theme and bits are cool, but the game fell flat for me. What's different from the original? 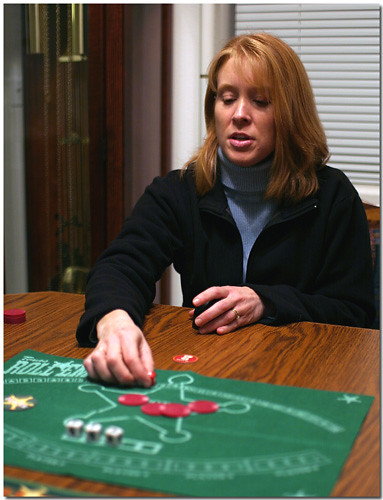 The final game of the night for us was the new Darryl Hannah design Liebrary. This is a derivation from the classic parlor game "dictionary", aka Balderdash. The difference here is that players are given the title and author of a literary work (in one of several categories, including classics, kids, horror/sci-fi/fantasy, and a few others) and must come up with the first line of the work. The judge player takes all the submissions and reads each one aloud along with the actual first line. As expected, you get a point for guessing correctly and for each other player that chooses your fake answer.

I found the game to be more challenging than Balderdash as you need to try and mimic the voice of the author. It won't be right for everyone, but I enjoyed it enough to make it my only purchase of the evening. The components for the game are very cool - the box looks like a giant book that folds out to reveal the card holders and the game board.