First, Happy New Year! We’ve had a great day of gaming at the coast, including some 3–on–3 basketball action down at the outdoor half-court.

The kids took it on themselves to play a five-player game of Shadows Over Camelot with the traitor, with Jacob explaining the rules. Chelsea turned out to be the traitor but the boys assured me the knights reigned victorious. 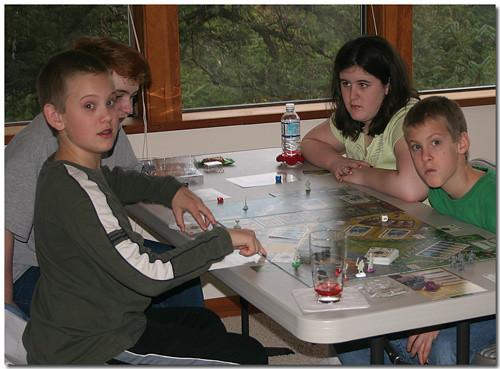 One of my as-yet-unplayed titles from Essen was the Martin Wallace title Byzantium. It is 2:30am on Sunday morning here and hard to go into too much depth here, but rest assured that there’s a lot going on in this game. There are also some very creative characteristics to the game that I haven’t seen before, but that might just be my limited exposure. KC, Ken, Justin, and I played a four-player game that lasted close to four hours.

Each player has the ability to control factions of Arab and Byzantine forces in conflict in the middle-east and Asia minor. Progress you make for Arabia and Byzantium are tracked on independent scoring tracks, and there are some constraints that encourage balancing VP generation between the two. Typical of Wallace games, there are many choices players can select, causing initial confusion / dilemma as players learn the various moving parts and basic strategies. The first turn (there are three in all) took close to two hours as we figured the basics out. 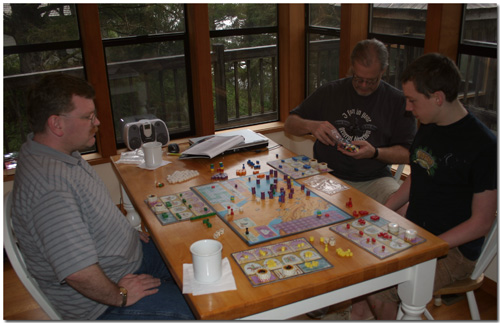 Each player controls an Arab and a Byzantine army and (usually) has a pawn on the board representing the current location of the army. The essence of the game is using your armies to attack cities controlled by the other side (Arab armies attack Byzantine cities) to gain victory points, though there are exceptions that include civil wars against your own kind and an inability to attack yourself (remember you are on both sides!). 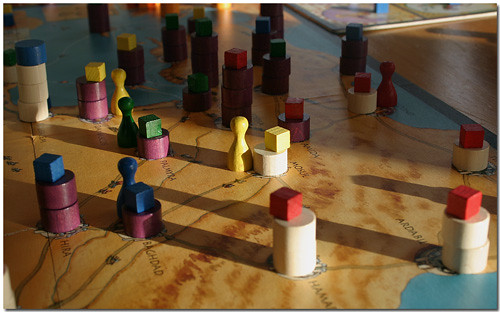 Actions are short enough that downtime was limited, a big bonus in my book (that’s why I like Antike so much). In our game it looked like KC was in the running for the win for most of the game, but Justin surprised us all with an Arab mad dash across the north of Turkey to take a shot at Constantinople. While the attack failed, the damage he did along the way was enough to secure a tie with me in VPs at the end of the game, with Justin winning the first tie-breaker. The game was tight overall, with KC finishing a single point behind and Ken only about 5 behind him.

I think I’m more inclined to play this again than the others, as I think much of our frustration was from first-play confusion rather than any problems with the game itself. This is a deep Wallace game after all and you need to get in 2–3 plays before it starts to sink in. I’m rating it a 7 right now but that might increase.

We all took a break 6 of us walked the half mile to the basketball courts for some 3–on–3 fun and exercise. I mention this to make it clear that we do get outside from time to time.

Most of the kids decided to go for a swim after dinner, so Ken, Brandon, KC, Rita, and I played my new copy of Oltremare from Essen. I’m a big fan of this game, though after my first play with five I wonder if it is much better with 3 or 4. I felt that the game ended too quickly (i.e., with too few turns) and exaggerated some of the luck of the draw differences. Case in point: I never drew a card with more than 2 cargo markers and was unable to trade for anything better. This made it very difficult to get enough cards down to make long sets. 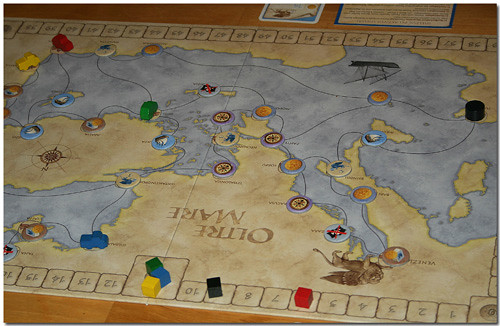 Still, it was fun and I think Rita and Brandon (first time players) enjoyed it very much. The bits in the new version are largely gratuitous and hardly helpful. As you can see in the photo above we replaced the ships with color-coded bits (wooden trucks in this case) so we could actually see what color was where; those ships are completely worthless. KC pulled out the big victory; Brandon and I tied for last. 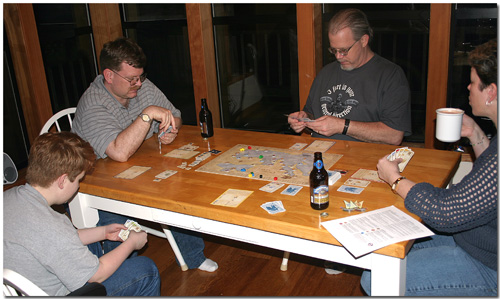 While I organized the start of our Magic tournament, all of the women gathered around the Mystery of the Abbey board for some deduction goodness. 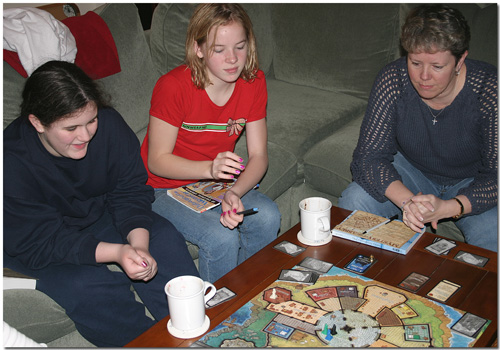 For our Magic tournament, I provided a tournament pack plus three boosters from the Ravnica set. We were all completely ignorant of the set, adding to the excitement of exploring a new set of cards and mechanics. I’m not a big CCG fan, but this is still one of the best games ever made. And it keeps on going…

I was hoping to try something different this year, perhaps involving blue or black as I tend to lean towards creature decks (green) or direct damage (red). The cards spoke for themselves though, and it was fairly obvious that I should play green/white given some of the guild combos and hybrids in my set. Ravnica introduces cards that can use either/or of two different mana types (green/white, white/red, blue/black, etc.). 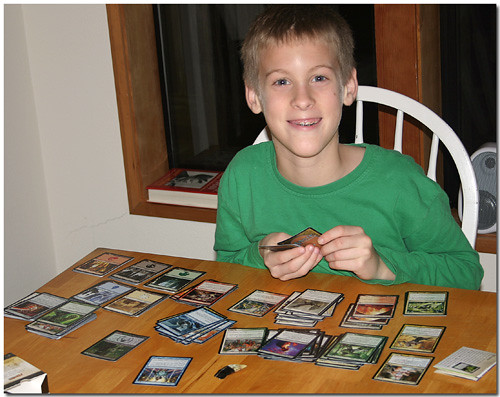 I did well in the swiss-style tournament, going undefeated and claiming the victory crown from Ken (he won last year). Ken and Brandon finished tied for second and will have a playoff match in the morning to see who claims second place. The games were a blast and everyone enjoyed the new set.

While we finished the tournament the rest of the crowd started a game of Electronic Catch phrase that lasted from 10:30pm until 1:30am. This was a blast and by 12:30 we had almost the whole crew engaged. 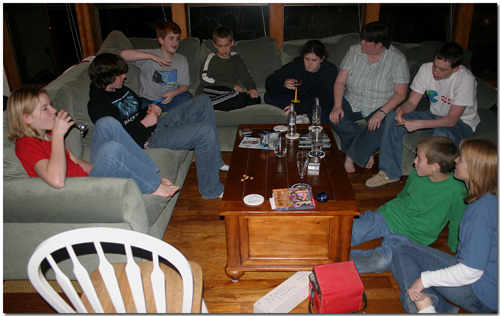 If you’ve never played this, run to Target or Toys R Us tomorrow and pick up a copy – just about any group will enjoy this game. It was especially nice to see different generations deeply engaged, laughing, and enjoying such a great party game. 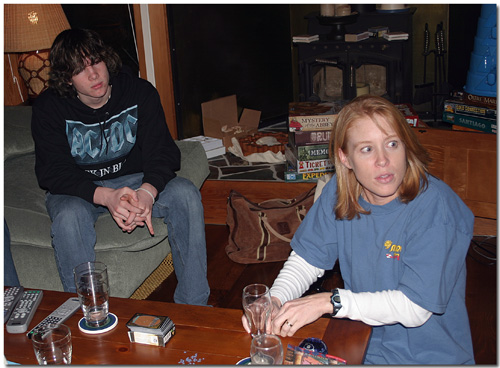 I don’t know what tomorrow will bring – maybe another play of Indonesia or some prototypes. You’ll know soon enough…