Friday was the kickoff day for our weekend gaming at Salishan with the Rude and Humphrey families. That makes 13 bodies in all, so there are plenty of opportunities for a wide range of gaming. Our goal is usually to bring out games we haven't played yet or rarely get played in our normal sessions. Here's an example of the games with the potential of coming out this weekend. 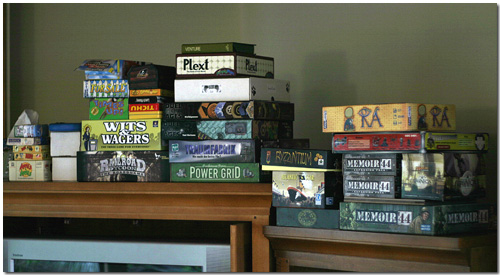 I picked up Ra at BGG.Con in a trade with Keith Blume. My first play of this was less than favorable, but given how popular the game is I figured I was missing something and took a chance on getting my own copy. KC, Rita, Ken, and I sat down to play it as our first official game of the weekend. 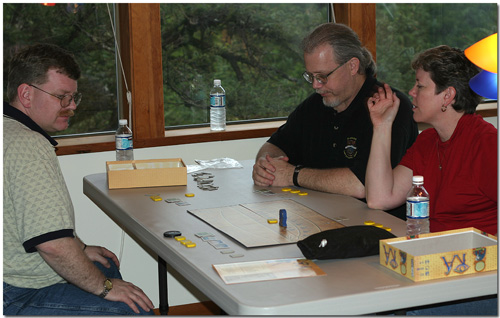 KC and Rita have played this game quite a lot, but Ken and I were essentially playing for the first time so we took some time to learn/explain the rules. I must admit the mechanics are very simple, the game is streamlined and easy to learn, and I quite enjoyed playing. The fact that I edged out KC for the victory 44-42 might have something to do with it. I really did enjoy the push-your-luck element combined with the auctions. There's a decent amount of luck in the game but that's OK as you can take steps to mitigate this effect through the bidding process. 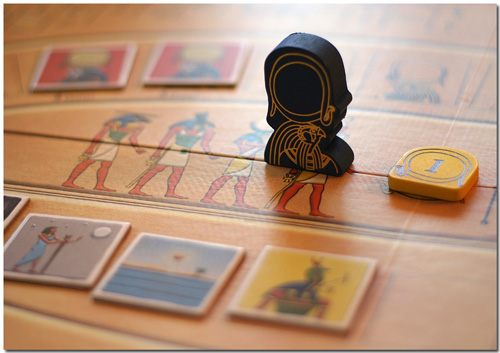 Julie and Justin committed themselves to resuming their speed duels. Justin tells me he's up by three games now. 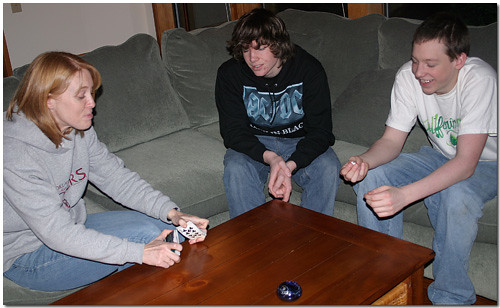 After our game of Ra, I suggested we try out the Sid Sackson classic Venture. This is a copy I purchased on eBay from Sid's personal collection. Not a bad little game - there are some similarities to Acquire in that players build out corporations, there are takeover mechanics, etc., but the game certainly does stand on its own. There were a few oddities in the rules that don't make much sense - money from proxy battles goes to the bank, not the player you steal the corporation from. Shouldn't the money go to the player? Also, as you run low in cards you get penalized even further, because if you can't afford to buy anything you must discard a card. I realize this is a mechanic intended to force players to keep cards in their hands, but it seems a bit harsh. The game went on a bit longer than we would have liked, but it was enjoyable and might be worth trying again with some rules tweaks. 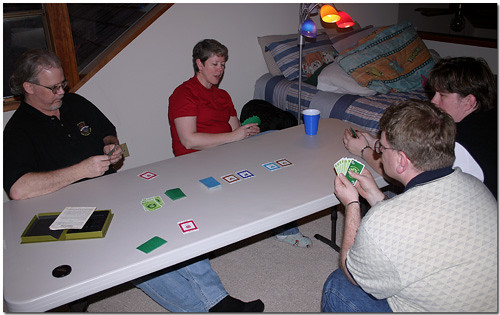 Justin, Josh, Rita, Julie, and I then played the SimplyFun game Plext, an interesting little word game that was challenging and fun. You shuffle a set of 14 dice and reveal them arranged in a linear sequence. Players are then challenged to come up with a series of words that use all of the letters in sequence order, inserting as many letters as needed. For example, if the sequence was "EQRPI" then you might write down "EQuestRian PIe". As soon as a player thinks he has a competitive (small) number of words that use up all the letters, he can call out his bid (the number of words), puts down his pencil, then starts the timer. The other players then have that much time to come up with their own bid, which can be any number of words. When the timer runs out, whoever had the first lowest bid gets the first shot at solving. If his solution was correct (valid words, used all the letters), he wins victory points totaling 10 minus the number of words. Repeat for eight rounds to determine the winner. 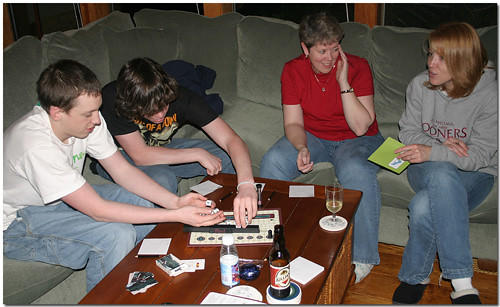 While we were playing Plext, KC and Ken played a game of Jambo. I think KC won. 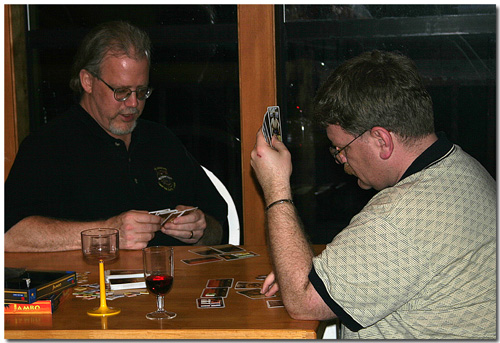 We gave Barbarossa as a gift to the Rudes, so Julie, Jenna, Chelsea, and Brandon decided to give it a try. Brandon says he enjoyed it very much, possibly influenced by the fact that he won. 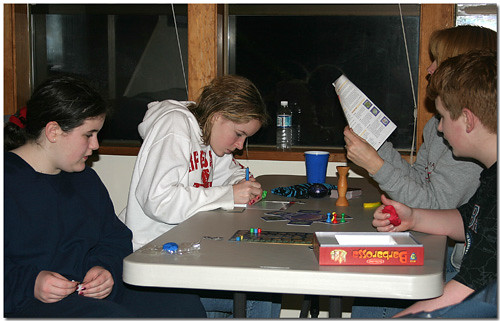 KC was eager to pull out McMulti, one of those hard-to-find holy grail games that often goes for $200+ on eBay. The game took us close to 3 hours to play and while it was enjoyable, it is a bit too much of a luckfest for my tastes, especially for a game that long. 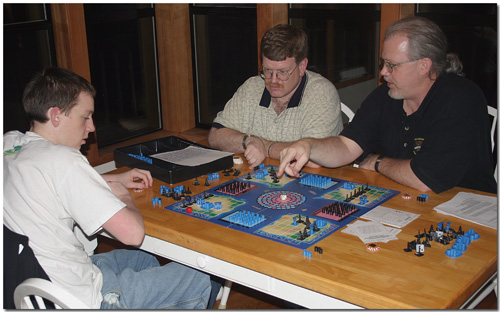 There are some creative mechanics in the game, especially for a game from 1974. My favorite is the cross-referenced die rolls that give production to the players on the right and left of the active player. The economic system is pretty cool as well, though we played with a variant that throttles the economic cycle a bit. KC, Ken, and I were all pretty close to each other, all surpassing the $1MM mark by the end of the game. KC ended up the victor with Ken a close second. 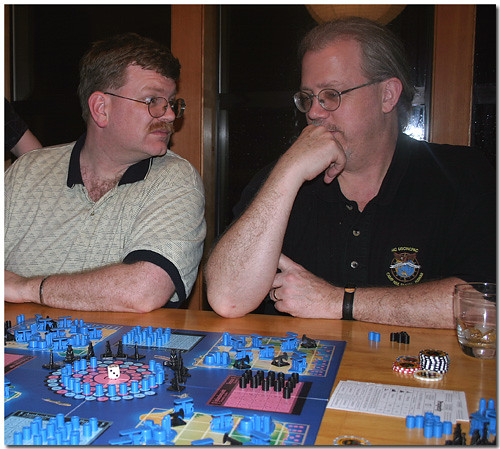 Our last game of the night was partnership Tichu, Ken/Chris vs. KC/Rita. This was my first time through a whole game of this, so it was nice to get the rules and basic strategy ingrained. I'm ready to try again, especially to get a chance to avenge our loss to KC and Rita. It was a close match with both teams close to 600, but they shut us down two hands in a row pulling out the victory. 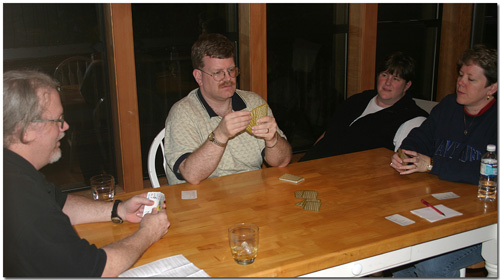