With Brandon spending the night tonight, I wanted to make sure we sat down to play a boardgame and not let the kids be completely consumed in computer games. They requested Age of Mythology - a solid choice given that the kids have been playing the computer game lately. Surprisingly, it has been almost two years since this one hit the table.

Brandon and Matthew played the Norse, Jacob the Greeks, and I played the Egyptians. As expected, fighting was early and furious, and by getting an early myth creature that was strong against mortals I was able to stave off any attacks and let them beat each other up. And they did. Over and over. 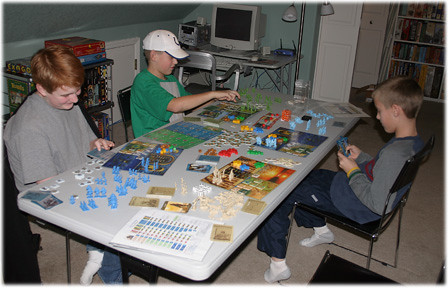 We cut the game short by about 3-4 turns. It was good fun but I was far ahead and the game was dragging on. I'm not sure this is good with four players - I think we should have played partners instead to balance things out. There's also far too much downtime in this when other players are fighting.