After returning from the coast this afternoon, Ken and Brandon joined Jacob and me for a four-player game of Parthenon: Rise of the Aegean. Here's a combined session report and review about a game I hope to play quite a bit more in the coming weeks.

Parthenon, published by Siren Bridge Publishing and marketed by Z-Man Games, caught me by surprise when I first encountered the game at GenCon 2005 - it wasn't on my "check it out" list because I had no forewarning of its publication. My experience playing a few turns with Rick Thornquist, Valerie Putman, and co-designer Jason Hawkins was strong enough to warrant an immediate purchase.

Most of the components in this game are cards - 440 of them to be exact. Each player takes the part of an island in the Aegean Sea struggling to take an important role in the Greek empire. Each island has a custom play mat showing the buildings that player needs to build in order to win the game - no two islands are exactly the same, differing primarily in the basic and rare commodities produced on that island but also in some of the optional buildings that can be built. The central game board is used only as a guide to the different islands to which players can travel - most of the action happens in front of each player around his respective play mat.

Each island has its own build deck with cards representing all of the buildings and fleets that can be constructed by that island, as well as a quick reference card and Archon card (more on that later). The islands specialize in the sorts of commodities that can be produced there, resulting in some interesting balance mechanisms when played with different numbers of players. There are three core islands used for any number of players, with a fourth player we chose randomly from the remaining three. Because the addition of the fourth island adds some overlapping commodity production, the fourth island plus the other two players that match up commodity-wise with the fourth island get some bonuses at the start to compensate for the reduced value of their commodities (increased supply --> reduced value, economics y'know).

The mechanic for building out the card is as expected - you produce commodities yourself, but not the right types to do everything you need to do. Trading is required, and players trade with each other as well as by traveling to nearby and distant lands. Better deals can be found in the foreign lands, but trips across the Med are fraught with risk. Players can mitigate these risks in a number of ways, including bringing along armies or warships, pleasing the gods, and building wonders or adopting philosophies that grant special powers.

The game lasts for three years of four seasons each or until the end of a season when a player has built all of his required buildings, whichever comes first. Our game lasted exactly three hours including instruction and finished after the 1st season in the third year. We played with the optional forgiving beginner variant that takes away some of the bad event cards that can hamper early development. 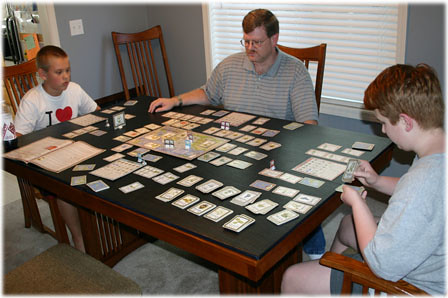 The core mechanic in this game is trading, but to be successful a player must plan for a wide range of risks that can often distract the player from achieving the ultimate goal of completing all of his buildings. There are also opportunities to exploit the current economic situation on the board - we found the commodity shortages in certain ports to be extremely lucrative for players that produced those commodities, especially if they came out early in the year. We did not find this to be un-balancing though, as there seems to be a decent mix of events and harbor effects that distribute well across each of the islands.

There has been some criticism of this game, claiming that it is yet another multi-player solitaire game. We didn't find that at all, with frequent trading, plenty of strategy discussion and positioning, and some interesting application of the Archon mechanic. At the end of each season, all of the players vote for a player to become the new Archon (you can't vote for yourself). The Archon resolves all order-of-play issues, which includes the order in which seasonal events take place as well as the order in which players reveal their actions. This is important because in each of the 10 phases of the seasons, players act simultaneously. In most phases order doesn't matter, but in a few it can make a difference so the Archon role is meaningful. In one case, the Archon had decide the order of several season events where the order could make the difference between a couple of players keeping most or losing all of their commodities. A well-placed tribute to the Archon helped the events to be resolved in a beneficial order (though he was under no obligation to do so, even after the "tribute").

Why does this game work? I'll give a few reasons why we all gave it high marks after our first complete play:

There are some similarities between Parthenon and the limited release Antiquity from Splotter Spellen. If that sort of game interests you, you owe it to yourself to try this one out. Plus, you can finish a game of Parthenon in less than three hours (try that with Antiquity…)! I'll be sure to revise my thoughts on the game if my feelings change after subsequent plays, but for now it is safe for me to say that this is my favorite game so far in 2005.