These game sessions were spread out over the past two weekends. Last Saturday while Julie finished up her Hood to Coast run, the boys and I decided to bring out Attack! and the Attack! Expansion. This came out once before and we had wanted to try a full game with the expansion.

The expansion adds a more robust naval combat system, deeper economics, and (optionally) an extra board introducing the Pacific theater. We played for about 3 hours total before we had to clean up, but this time we were able to take a snapshot of the board and we should be able to resume next weekend. The game is currently perched on the edge of player vs. player conflict - so far we've been spending most of our time conquering neutral areas. I'm looking good in the far east and have a decent position in the western US (which, by the way, was virtually all communist by the start of the game!). Jacob controls most of Europe while Matthew is holding down Australia and South America. 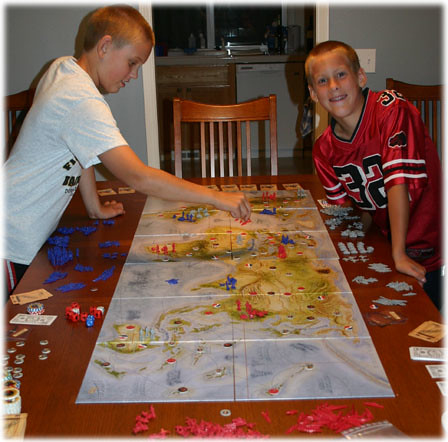 The economic system of using oil reserves as action points gives a nice throttle on player activity and keeps downtime to a minimum. I can see why some have claimed that the expansion plays better with some variants, such as limiting political action card plays in a turn and using threaded turns to prevent the "I get to wait through 9 individual turns until my next turn" issue with the rotating start player. With three I don't think there are problems and we are having a blast. I'll follow up after we play it through to completion.

We've spent the holiday weekend here at Salishan with Jan and David and got in a healthy dose of gaming, mixed in with some beach campfires, hiking, and a day trip down to Newport. Friday afternoon Jacob, Matthew, and I taught David how to play Manila, a game we learned and picked up recently at GenCon.

I re-read the rules as we sat down to play to refresh my brain, and realized that we had been taught wrong. At GenCon we were taught to place all of the accomplices before movement into harbor began; it turns out that after the first accomplice is placed, a single die roll and movement occurs, followed by the second accomplice round. This continues until the third movement roll and final disposition of the wagers. 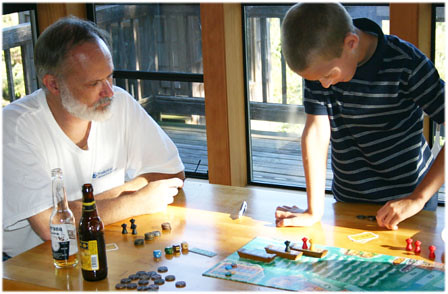 This made the game a little less chaotic and, I think, even more enjoyable. I'm surprised Manila isn't rated higher on the geek - I suppose it gets dinged for the gambling / randomness of the game. Any game this short and fun with decent strategic choices is a winner for me. Definitely pick this one up or try it with a friend. I eeked out a win in this game, with Jacob placing a close second. Bidding for harbor master was much more aggressive in this game, with the bids sometime surpassing 20 pesos.

Sunday morning Jacob and I tried a full game of ChiZo Rising, the collectible Chinese zodiac game that I reported about earlier. I opened the remaining two boosters from GenCon and incorporated any relevant tiles into the appropriate decks based on creature affinity. I need to qualify my comments here by saying that I've spent no time building tile decks other than filtering out useless tiles. 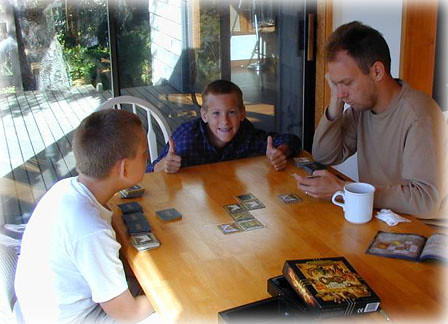 This game started out with me holding the upper hand and Jacob getting a bit resigned to defeat. At one point I was up 7 or 8 capture points to 4, but I realized I was in a poor position regarding my creature layout on the board. I captured four of my own creatures by building a 2x2 square and left myself very vulnerable with isolated creatures on the corners of the play area (this game could really use a play mat with square grids to keep track of tile locations). Jacob took the initiative back from me (initiative looks like it will be a big part of winning this game… if you can keep your opponent reacting you can go far) and the game came down to whether or not he would have the tile in hand to complete his own 2x2 square and get to 12 points. He did and beat me 12-8. We aren't wild about this game yet - Jacob rates it about a 6, while I'm a bit more generous with a 7 or maybe even an 8. The scary thing is that I think I need to buy more tiles to decide, as I need to explore the deck building meta-game to see how much depth there is. I'm also anxiously awaiting the launch of their web site - when is it coming??

This afternoon we brought out one of my recent Goodwill finds - a senior citizen version of the classic betting game Tripoley. This is a fun diversion, and we play the more strategic variant where you can only claim the hearts bets when you play those cards during the "Michigan Rummy" phase. Even with this, the game is mostly random with a tiny bit of bluffing during the poker phase. The kids love it and I'm sure it will come out frequently. 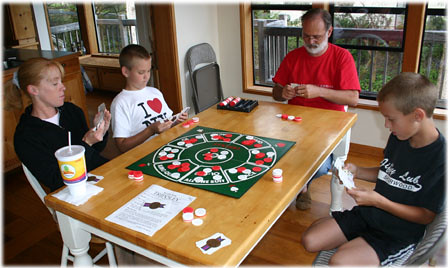 The last game tonight was a two player game of Agora, the hip pocket game from CheapAss Games. This is a tile-laying, market-building game that I picked up mostly because of a positive recommendation by Joe Steadman on the Dice Tower. I had to bribe Matthew to play it with me, but he had a blast and hopefully will ask for it in the future. 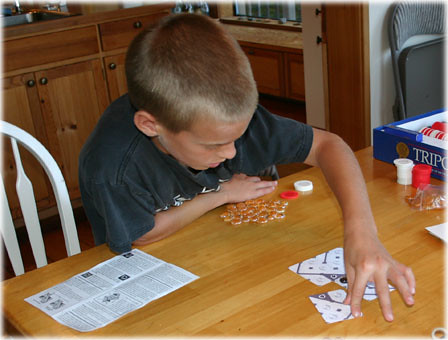 The idea in this game is to build and buy markets that have the most valuable street facing, which is calculated by looking at the number of open segments facing the outside of the market (not enclosed sections, aka alleys). Each player turn happens in four phases: income, draw a tile (and possibly, special effects), place the tile, and buy a market. The fun part of the game is tile placement, which is not strictly orthogonal or even constrained by a square grid. We discovered some interesting ways to place tiles to cut off opponent markets while expanding our own - I'm sure we've just hit the tip of the iceberg in this game. It played quickly (about 30 minutes) and is a fun, short diversion.