Day 1 is over - a great start to what looks to be the biggest year ever for GenCon. They appear to be running out of room at the convention center and are one of the driving forces (along with the Indianapolis Colts) leading to a build-out of a new stadium and convention center.

I'm not going to post all of the photos here, but go ahead and check out my flickr photo stream for a larger selection of pics taken at the show.

Jacob and I originally scheduled a morning session in the True Dungeon, but unfortunately Jacob is not yet old enough for this event (the minimum age is either 13 or 14 depending on who you ask), so our first task was to get a refund for those two tickets. This process went very smoothly, taking only about 10 minutes - this is in stark contrast to the line (once again) for those that needed to pick up their badges. Looks like it was another 2-3 hour wait for most.

With nothing scheduled for the day other than some booth demo work at Days of Wonder, Jacob and I decided we would spend most of our time on the show floor. With 45 minutes to burn while waiting for the floor to open, we wandered over to the boardgame area in the 500 hall and checked out Carcassonne - the Castle from GameBase7. This is a nice little Carcassonne variant but I didn't see much there that I haven't already seen in other versions. I prefer the Carcassonne - the City.

We hit the show floor about 10:15am. Our first stop was Fantasy Flight, mostly because they were in a conspicuous location and I saw an empty World of Warcraft - the Boardgame demo table. 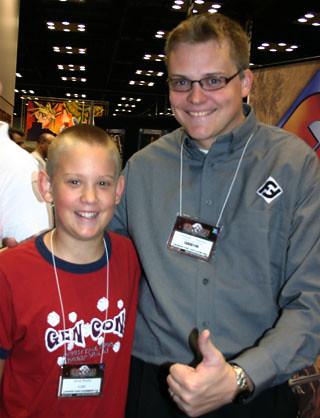 Jacob poses with Fantasy Flight CEO Christian Petersen. If you haven't already done so, make sure you read his rant about how the company started.

This game, as you might expect, is enormous. I wonder if FFG and Eagle Games are actively competing for heaviest (in pounds) game. We played through a single turn and got a decent feel for the game. This is a dungeon-crawl board/RPG game that involves completing quests, buffing up your character, and rolling lots of dice. 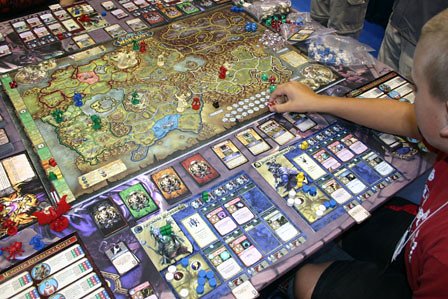 The map, cards, and character boards for World of Warcraft.

This is game is likely to be a winner because of the licensing tie-in, but I'm not sure there's much of a game in there in terms of creative mechanics or concepts. It felt a lot like Runebound to me (yes, I picked up my $20 2nd edition upgrade at the FFG booth) though the bits are much nicer and the scale much grander. There's also a player-vs.-player element to the game that I never experienced in the demo - perhaps there's more to it than I'm seeing? 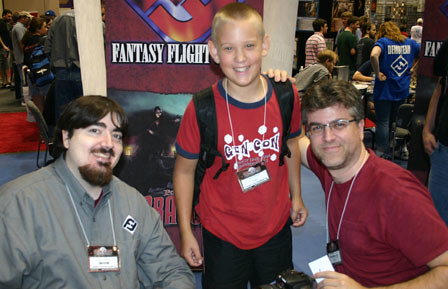 Jacob hanging out with designer Kevin Wilson and pundit Rick Thornquist. Rick and I bumped into each other a few times throughout the day but never found the time to have a real conversation - hopefully that can happen tomorrow.

Jacob and I still have a long list of demos we want to try out on the floor. One of these is Axis & Allies Miniatures, though I'm skeptical of the game itself based on some comments by Joe and Tom. Avalon Hill has an absolutely spectacular showcase of WWII vehicles and other static displays - they win the prize for environmental impact. 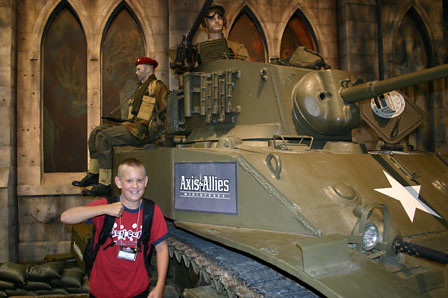 Jacob with the tank.

The demo highlight of the day for us was Railroad Tycoon, the remake of Age of Steam and collaboration of Martin Wallace and Glenn Drover. Age of Steam is a game I've wanted to introduce to the boys but it is a bit dry and complex. The video-game tie-in and simplification of the system might make for the perfect train game for our family, and I wasn't disappointed by the demo. 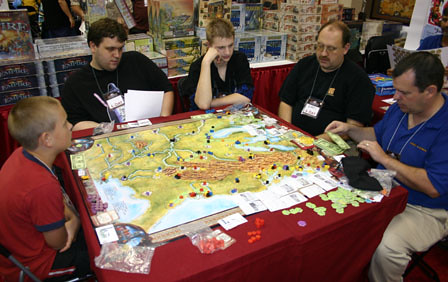 Jacob joins me, three other playtesters, and Keith Blume from Eagle Games in a demo of Railroad Tycoon.

The board is huge for this game - bigger than the World of Warcraft board. I like the scale of the board and the way it conveys the scale of the United States. We played with a mix of real game components and substitutes, so it is difficult to get a feel for how all of the bits will work together. The game itself was great and I didn't find myself missing some of the complexities taken away from Age of Steam. Jacob also gave it a big thumbs up. Did I mention how big the board is for this game?

I took responsibility for the 3pm demo session for Shadows Over Camelot, the outstanding cooperative game that I've mentioned before. Days of Wonder built a beautiful 3D setting for the game, including a castle and areas depicting all of the quests. They also did a fine job painting the knight miniatures. 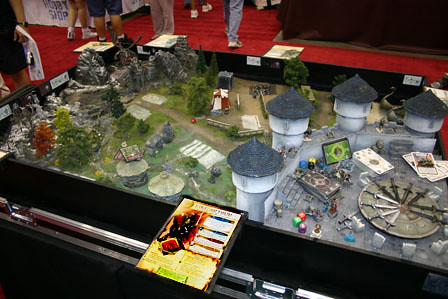 The 3D setup for Shadows Over Camelot.

I guided a group of seven others through an entire session of the game, played without the traitor (though in hindsight I probably should have included it). The game was finished in about 1:50, which isn't bad for a whole group of newbies. I think they were enjoying it so much that they didn't want it to end; they especially didn't want it to end with a failed quest (which is often the best way to finish the game, BTW). The game could have easily been over in 1:30, one reason why this game ranks so high for me right now. 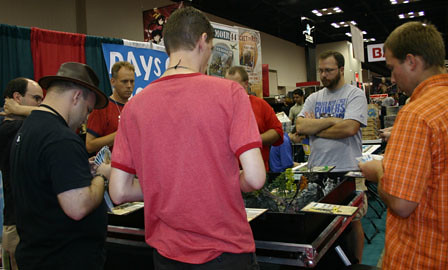 That's me, third head from the left, teaching 7 others how to play Shadows Over Camelot.

Time to retire - Jacob and I need to be back at the Con by 8am for our RPGA event. Saturday we'll bring Matthew with us for some more RPG action (including a kids LARP!) and boardgaming. Stay tuned for my day 2 report tomorrow!