Sunday we joined the Ken and Brandon for some D&D in the afternoon (our ongoing Forgotten Realms campaign) and some brief boardgaming in the evening. Looking at my game collection for unplayed 2-player games, I discovered A House Divided, the light American Civil War wargame published most recently by Phalanx. I won this at a the Rainy Day Games auction a few months ago (I think Dave sold it??). Jacob, Brandon, and Matthew decided to try another unplayed game that I picked up at Goodwill a while back: the Harry Potter and the Sorcerer's Stone Game.

The boys played this cold out of the box, teaching the rules to themselves and struggling through what is a needlessly complex rulebook. There are actually 6 different games in the box (6 3/4 if you count the final random card draw for the end-game); a couple of them involve some skill but most are very luck driven. 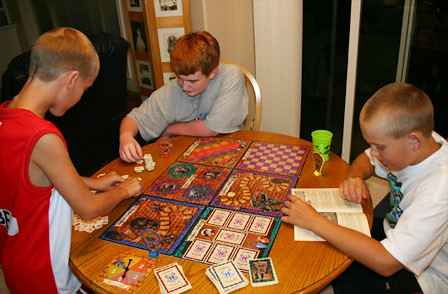 Matthew, Brandon, and Jacob working through the rules.

They called for help for the rules to the last sub-game - I read the rules 3 or 4 times before finally figuring out what the designer must have meant. In fact, Ken and I finished a (shortened) game of A House Divided well before the boys got through this game. Comments after the game included "I don't want to play that again," "we should sell this for $0.99 at a garage sale," and "we should give this back to Goodwill." Anyone want to trade?

Ken and I had a much more positive experience with A House Divided. This is a very light, somewhat abstract strategic level depiction of the Civil War. I say abstract because of the simplified movement system, which is essentially city-to-city via roads, rivers, or rails. This game has about the same complexity level as the Columbia block games and even shares some similar mechanics for combat resolution. 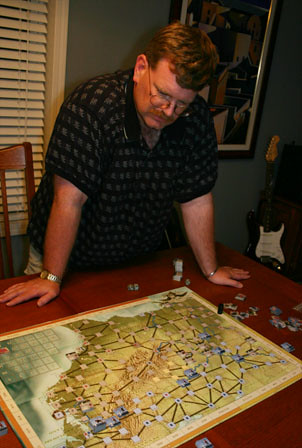 Ken studying his options as the confederate player.

There's a lot to like about this game. I was able to read the rules in 30 minutes before Ken arrived and teach him in about 15 minutes - the basic game is very easy to learn. Movement choices are constrained in each player's turn by a D6 die roll to determine the number of available "marches" (2-6 per turn per player, first turn each player only gets 2 marches). There's some quirkiness to the victory conditions that can lead to some odd strategies, especially since we decided to end after 10 turns while 8 turns into the game (this was about 2 hours into the game). Ken wisely started chasing around claiming union cities to try and get the victory points (via maximum army size) to swing in his favor. The games seems fairly well balanced as well, offering interesting choices to both players even with the basic rules. I look forward to playing again through the entire campaign, perhaps with the advanced rules that introduce supply and command. Definite thumbs up and if you like games like Hammer of the Scots and Liberty you'll probably enjoy this one. My one complaint in relation to the block games is that I found there to be too few dice rolled in combat. This may seem like an odd complaint, but since there's no "strength" of units in this system (only firepower) Ken and I often found ourselves rolling a single D6 against each other, waiting to see who would roll a 1 or 2 first. When a unit is damaged, it automatically recovers back to full strength at the end of combat. I prefer the block system where units "remember" their damage and can be restored through a supply process.