Ahhh, this takes too much time each night! But, if I don't take the time then I rarely remember important details and almost certainly fall too far behind in my posts.

The day started with an early RPGA Living Greyhawk adventure for Jacob and me. We created our characters at GenCon 2004 and played a few adventures at GameStorm in Portland this year. Even if you are a casual D&D gamer this is a fun way to take advantage of the convention to do something a bit different - this is always a highlight for us. 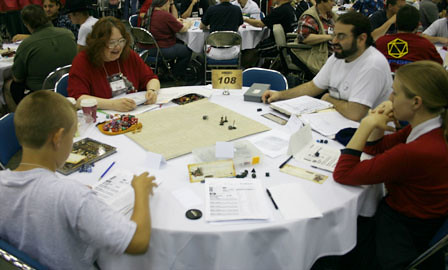 That's our GM in the upper left - she did a great job narrating and we successfully accomplished our mission with an undersized party.

Jacob and I took advantage of some free time around lunch to roam the floor some more. I spent a brief amount of time at the auction, winning a couple of interesting military history books, and allowed Jacob to spend some time doing demos at the Wizards of the Coast section. I returned to the floor and wandered over to the Z-Man Games booth to see what was up and found Rick Thornquist and Valerie Putman getting ready to try out the new game Parthenon. This is a production of Siren Bridge Publishing and Z-Man will be handling sales and distribution. 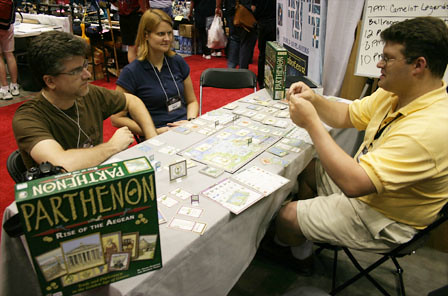 Rick, Valerie, and game designer Jason Hawkins join me for a demo of Parthenon.

This is a very interesting game, and one that I think might have a great deal of appeal to eurogamers. There are quite a few borrowed elements and mechanics in this game. The theme and art treatment immediately reminded me of Attika, but this game is quite a bit deeper. The basic idea is resource gathering to build out through a tech tree with a wide range of random events and other influences that can change the game enough to keep it interesting from play to play. Also, each of the city-states (or islands, I can't remember) starts with a different resource slant, creating some differences in strategy depending on the player. I can't comment on balance or how long the game takes yet, as we only played through the first of three years during the demo. But I did like it enough to buy it on the spot and look forward to giving it a try shortly.

Oh, and while I was playing Parthenon these two gents walked up: 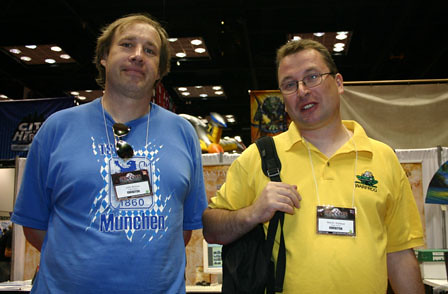 At 2PM Jacob and I took off for the boardgame hall for our schedule event: Giant Seafarers of Catan. We enjoy playing this once each year on the "big board". This time we were up against a friendly couple (they might have just been friends, but who knows…) and it was a tight, tense match that I managed to win by grabbing the largest army tile for my 13 points. 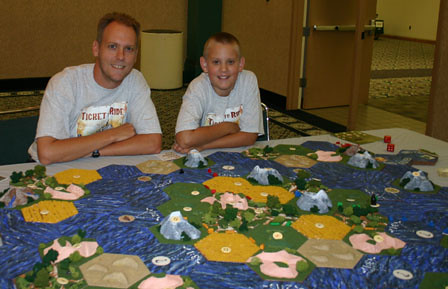 Jacob and I during our Seafarers match. I was orange and managed to build out to the island in the upper left (you can barely see me making my way to the see on the main island).

One side-note: the guy who makes the Settlers Organizer dropped by to let us his cool little contraption during the game. I figured the least I could do was give him a little promo here - this is a helpful little caddy for Settlers and the expansions! 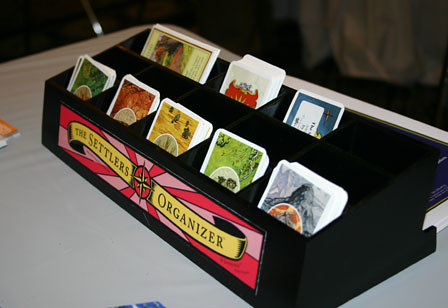 The Settlers Organizer in action.

After Seafarers we had a bit of time to roam the floor again. 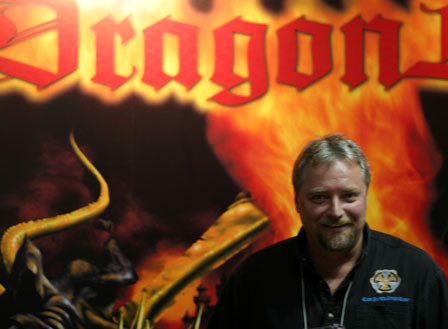 This is Robert Johannessen, designer of Quest for the Dragonlords. Dave Eggleston was kind enough to donate this game to me and I picked up the latest expansion today. It provides an economic upgrade system to the game and includes some very nice pewter miniatures. 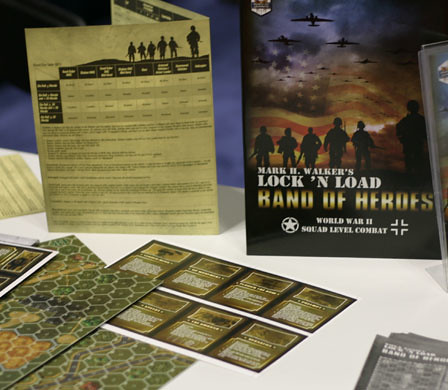 Here's a glimpse of the latest Lock 'N Load release, Band of Heroes. This takes the original system (Vietnam based) into WWII. I picked up the original two years ago and have only played it twice, but it is a solid system worth checking out. 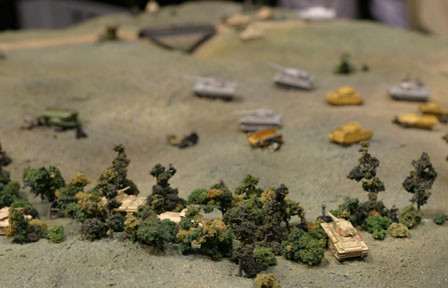 Jacob tried out the Axis & Allies Miniatures game today. He said it was the best game he played all day (not counting D&D). When I probed and asked if it was because of the game or the really cool minis, he replied "well, hmmmm…". I'll try it myself and report back… 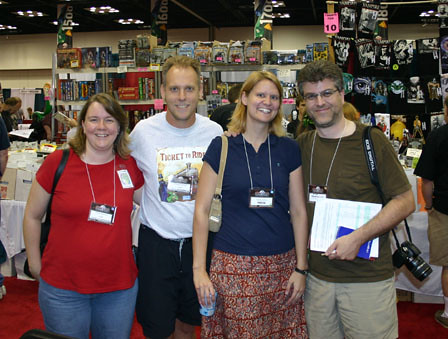 The day ended with another Days of Wonder booth shift. Denise Patterson, Valerie Putman, and Rick Thornquist all stopped by to chat and I roped Mark Kaufmann's son Michael into taking this snapshot.

That's all for now… see ya tomorrow.