Each night I start these reports later and end up with less text. The tradition continues this late Saturday night as we just returned from an 9am - 11pm gaming marathon. Matthew joined us today and it was our best day yet. The crowds really pick up on Saturday making the show floor quite congested; combine that with a Colts / Bears pre-season football game in the adjacent RCA Dome and this was one busy downtown today.

The morning started at 9am with a meetup of a small group of diehards from BoardGameGeek. I coordinated this in one of the discussion forums and it was great to see such a strong turnout. We checked out a couple of games from GameBase7 and went to the reserved tables in Hall 500 to start. Three games hit the table right away - For Sale, St. Petersburg, and HAVOC: the Hundred Years War (wow, it feels cool to do a BGG link for that game!). 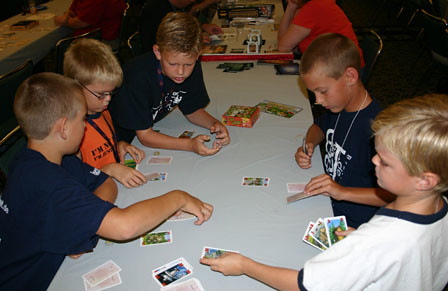 Jacob and Matthew teach For Sale to ginn5j's (website) three sons. This was a big hit and was followed by Pick Picknic.

I brought out an early (but portable) playtest version of our soon-to-be-published game HAVOC: the Hundred Years War (website) and taught it to ginn5j, rschmucker, and qzhdad. Amazing coincidental side note: Randy Schmucker's father taught my chemistry class in high school! 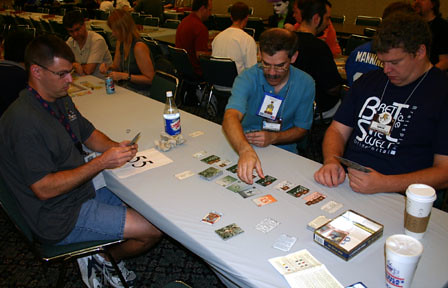 I think impressions were favorable and at least one of the group indicated he will pick it up at BGG.Con. 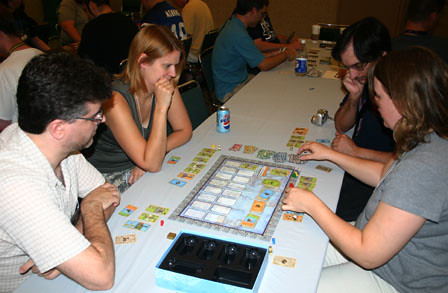 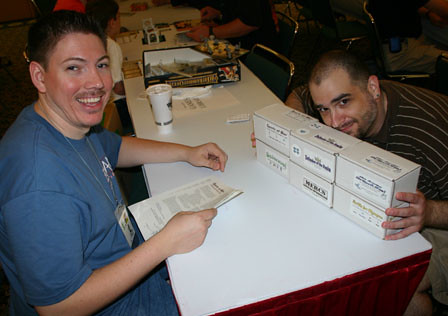 Zambo and ynenn (Jason Little) get ready to try a stack of Jason's prototypes.

Thanks to everyone that showed up to make this a nice diversion and chance to put faces to names. Let's do it again next year!

We wrapped up around 10:30am, hit the show floor for a while, grabbed some lunch, then went to our second annual Anime BESM RPG session. This is very light-weight RPG action and perfect for kids - think of it as interactive story telling with low emphasis on killing monsters (these are rated TV-7Y - no killing!) and high emphasis on role playing, humor, and fun. 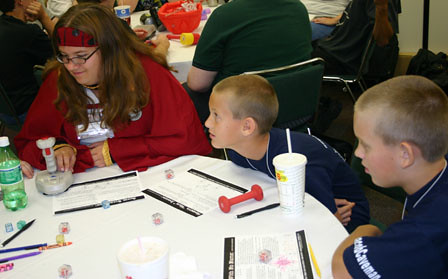 Matthew played a brutish bully-bashing 3rd grade girl; Jacob played the kid-with-no-name and was only allowed to speak twice during the adventure. But boy, did we listen when he spoke.

Next we split up on the show floor, with the boys playing some more Pokemon while I sought out some collectible game that looked at least a little innovative. I don't understand how each year new CCG games get released that bring nothing new to the industry - same old mechanics, same old themes (fantasy, anime, superheroes). Tucked away in the back row of the show floor was a very impressive booth by Temple Games where they were showcasing their new collectible tile game titled ChiZo Rising. 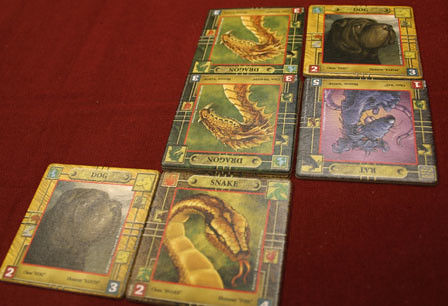 Some of the tiles in ChiZo Rising.

I sat down for a demo, expecting to be disappointed but ended up being surprisingly interested in the game. There are some interesting mechanics here based on the geometry of tile laying - interesting point #1. They also implemented a real "action stack" of tiles - interesting point #2. I enjoyed it enough to pick up two starters and two boosters for $30 total and will report more soon as I give it a try with the boys. The artwork is pretty impressive as well as you can see from the photo.

Jacob, Matthew, and I then challenged each other to a game of Ticket to Ride: Europe in the Big Box Play & Win section. This was a first play for the boys and we all enjoyed it immensely - I'm convinced this is even better than the original. I prefer the tightness of this board and the ability to use train stations to squeeze in an extra ticket or two. 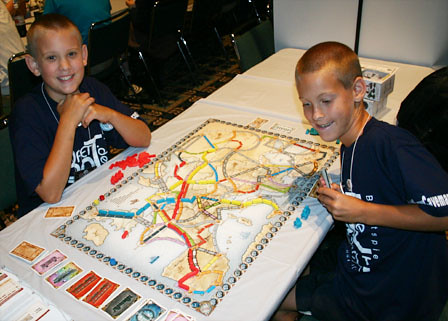 Jacob and Matthew near the end of our game.

The "play & win" and "learn & play" areas were well done - they had DVD instructional videos for several of the games (as you can see below). A great way to scale the teaching process. 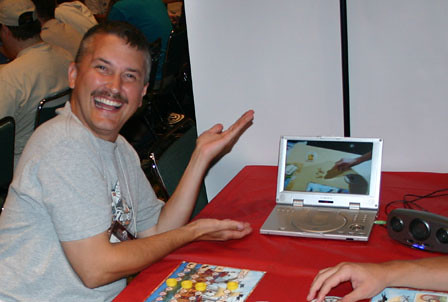