As I mentioned before Jacob and I spent last weekend at Game Storm, the annual gaming convention on the north side of Portland. The newly renamed Thunderbird Hotel is a fine venue for this event, a bit dated but very affordable with decent amenities. This year we spent quite a bit of time in the RPGA section, but more on that in a bit.

I'll post day 3 later, then review the sights and sounds of the con (mostly games I watched other people play) in a final post.

Jacob and I arrived Friday evening around 5:15pm. After checking into the hotel, my first task was to deliver a stack of two-player games (some of them mine, some Eric's) to KC and Jay for their annual two-player tournament. I had planned to enter the tournament, but Jacob and I ran into Ken and Brandon in the lobby (they shared a room with us) and learned that they were going to try a Living Greyhawk RPGA adventure. Jacob, Matthew, and I played in a Living Greyhawk adventure last year at GenCon, so this sounded like a fun way to continue with characters we had already made. One problem: I left all of the materials at home. Fortunately, we had an accomodating DM that allowed us to mock up our characters for one adventure (we made them as similar to the originals as we could, based on memory). 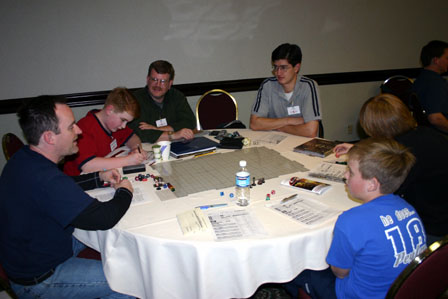 Our first adventure was a Living Greyhawk intro module.

The party did a great job killing all the bad monsters and stuff and we all survived, with Jacob and I advancing to second level (woo hoo). The next morning I drove home very early to check on the cats and retrieve our RPGA materials, allowing us to transfer the information from Friday night's adventure to our "real" characters.

Our final game Friday evening was Colossal Arena, which Ken had not yet played. I'm always happy to bring this game, and I think Ken and the boys enjoyed it as well. If memory serves me, Jacob came out on top in this battle.

Like I said before, Saturday morning started out for me with a 90 minute round-trip to home. Jacob stayed at the convention and joined a group playing Car Wars card game and Battle Cattle (combined). 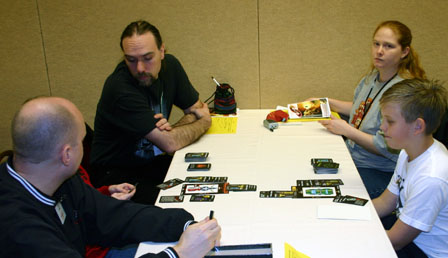 Jacob apparently had a blast playing these games, but I don't think they would be my cup of tea. I probably shouldn't be too quick to judge but will definitely want to try before I buy.

I signed up to play Gettysburg: Badges of Courage, one of the newest Columbia Games block wargames. I recently picked up this game (along with Eastfront and Rommel in the Desert) largely based on the high praise of Chris Farrell. Jay and Ken were excellent teachers, setting up a day 2 scenario that played well as a 3v3 scenario. 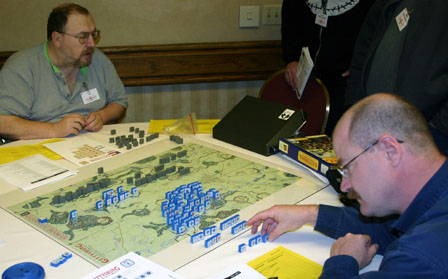 Ken Crangle, on the right, was our teacher as well as the Union field general (our Meade, I suppose).

While this game shares many similarities with other Columbia block games, it has a very unique command / control and leadership influence system. Columbia excels at adding twists like this to a base system that helps bring new flair to what could be a tedious model (new setting, same game). 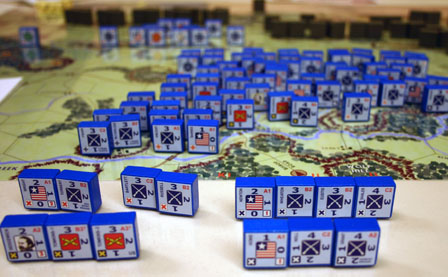 Unfortunately we only had 2 hours to play, including instruction, so we barely made it through 2 turns. I can't wait to play out an entire scneario.

While I was playing Gettysburg, Jacob sat through a 2 hour (!) panel discussion on how to be a great dungeon master. I checked in on him about every 15-20 minutes, and every time I looked in the room he was sitting attentively and very engaged. 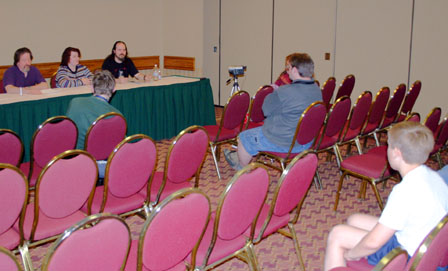 Apparently he learned some solid tips that he hopes to apply soon as a DM, including:

Next up was a Havoc playtesting session that KC and I ran. I bet over 10 games of Havoc were played throughout the convention and we continue to hear excellent feedback on the game. Perhaps you'll see it published before too long... 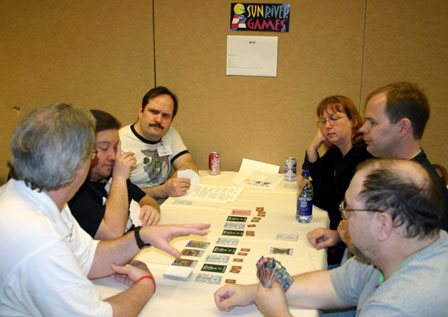 KC teaches another group how to play Havoc.

We were all ready for some lighter fare, so KC and Jay brought their collection of knick knacks (I'm not sure how it is spelled). These are little robot-looking guys that you can play a stacking game with, trying to mimic the player to your right. We had quite a bit of fun playing the game initially. 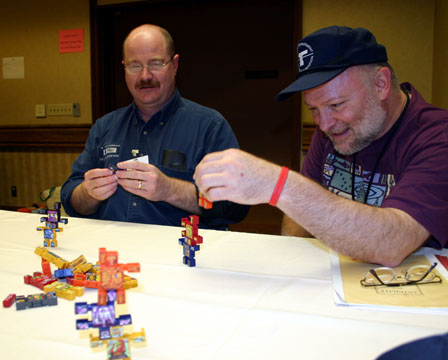 Jay tries to outdo us in knick knack.

Then we just started to try and make crazy or unusual stacking patterns. 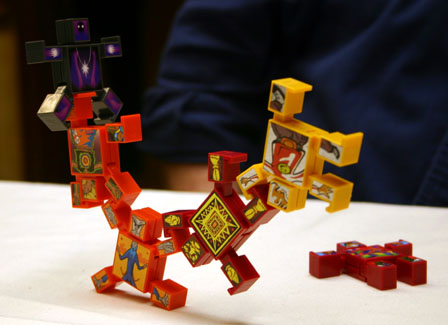 This was my favorite of the day. Nice work Ken. 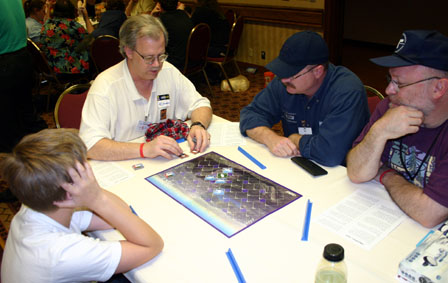 While I finished putting stickers on my Gettysburg wooden blocks, KC teaches Ken, Jay, and Jacob the square version of NW Trek. 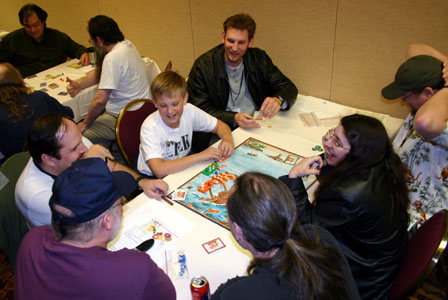 Ken, KC, and I then decided to try and tackle Antiquity, the limited print run game published by Splotter Spellen last year. I had only heard bits and pieces of this game but the scope and detail looked very appealing. This is a tough game to play straight from the rules - we were an hour into it before we felt comfortable starting our first turn, and that first turn went slowly as we started to figure out the key mechanics (e.g., how do you build a farm if you need seed, when seed is produced by a farm. Oh, you can explore to find seed. Got it.). The best analogy I can give for this game is that of an empire-building RTS computer game like Civilization or Age of Empires. Each player begins spread out from the others, so there's little to no player interaction early on so we were mostly playing solitaire. I had to leave after the fourth turn for an RPGA event and Jay took my place. 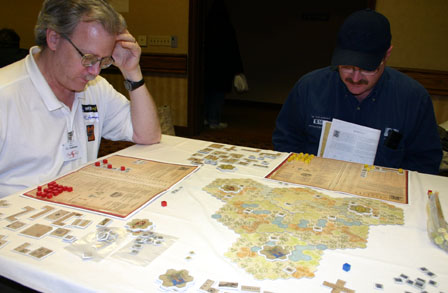 KC and Ken try and figure out Antiquity.

I came back about 3 hours later and they were still going at it. I was enjoying it very much when I left and would like to play through an entire game. I can see how it could be fiddly and slow, but something about it appealed to me. I just need to find a full Saturday to devote to it (and get down to Albany to play Ken's copy).

I left the Antiquity game for another RPGA Living Greyhawk adventure. This one was a bit more challenging as we had to defeat some dervishes and an Ogre (hey, that's a big deal for 1-2 level characters!) but we all survived to fight another day. 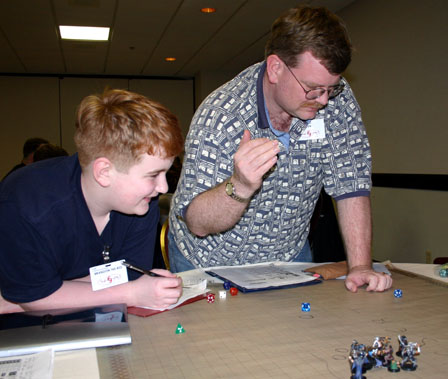 Ken makes an attack roll for his half-orc barbarian.

I had this brilliant idea to teach RoboRally to Ken and Brandon at 10:30pm after about 15 straight ours of gaming action. Nothing like a light game to close out the evening. If there was ever a brain-burner game, this is it. Not only do you need to have great geometric spatial awareness, you need to think like a programmer and anticipate what the other robots will do. I think everyone enjoyed it but it was certainly frustrating when robots got mis-programmed due to fatigue and newness to the game. We'll give it another try when we are all fresh. 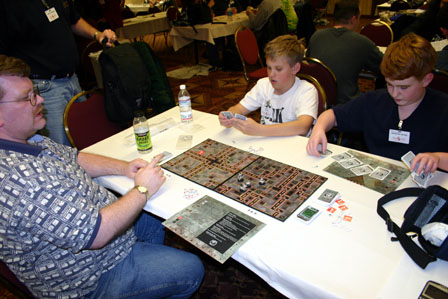 Ken, Jacob, Brandon and I trying out RoboRally.

All in all, a great start to the convention. More to come soon on the Sunday action.