The main event for me on Sunday of Game Storm 2005 was family gaming from 9-noon. With Jay's help I was able to run over 8 different game sessions with a wide range of folks (over 20). Unfortunately we didn't get many families with kids to show up, but given that I didn't see many kids at the con (other than at the Yu-Gi-Oh tournament) this wasn't very surprising.

We started with a game of Can't Stop, the classic Sid Sackson press-your-luck game. 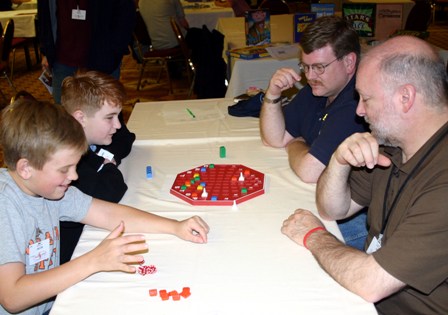 There were some exciting moments that I observed... 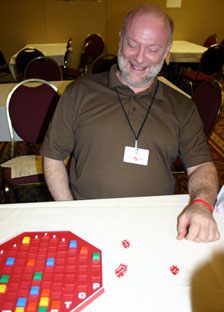 With Can't Stop rolling, I offered to teach another group Ticket to Ride, one of the better games from 2004. I sat in and played for a few turns until a fifth showed up to take my seat. 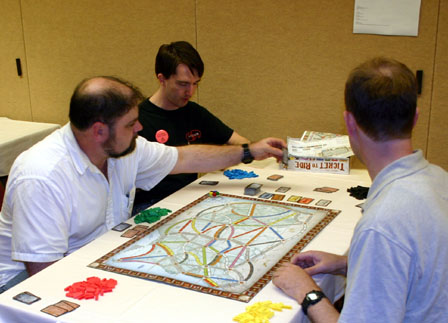 Aaron (head of Game Storm, center), Lennart (right), and unknown gamer (left) setup for a game of Ticket to Ride.

This allowed me to move on to teach Carcassonne... 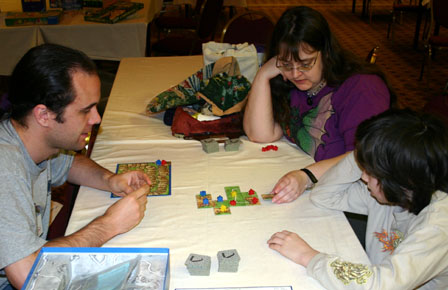 Finally another kid shows up! He helped me teach Carcassonne to another two adults.

I recommended to Aaron and a few other gamers that Carcassonne: the City would be a great game to try. This one is a bit harder to teach as it has two very distinct phases (tile-laying, followed by city building and tile laying). If you try and teach the rules for walls and guards at the start, players are overwhelmed with information they won't use for a while. Fortunately there are few choices early in the game that affect how well you do during wall building (other than keeping meeples in reserve), so I think it works fine to teach it once the first stack of tiles is cleared. 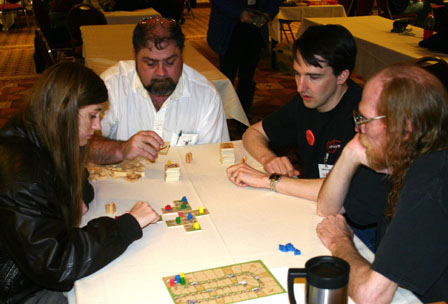 Carcassonne: the City early in the game.

While babysitting the Carcassonne: the City game, I roped in a few more gamers to give Take it Easy a try. I'm a sucker for this (essentially) solitaire puzzle game. None of the three others (that's Wes in the middle. You may remember him from previous Game Storms) had played before and enjoyed the short time it takes to play the game. 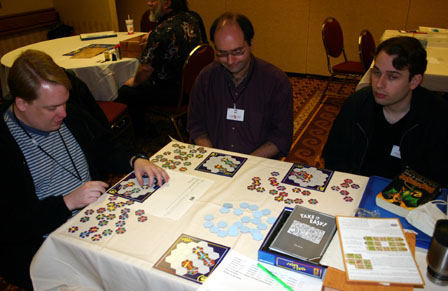 Wes was the victor, with me a close second place. 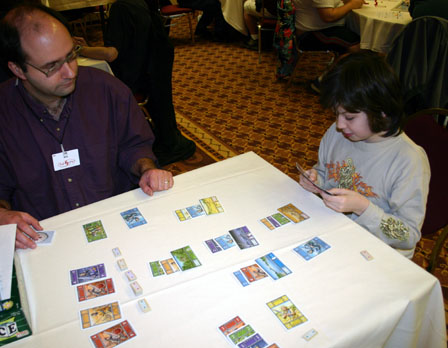 The final game played during the family gaming event was Saga, one of the small-box games produced by Uberplay. This game is easy to teach, has nice graphics, and is quite fun to play. Works great with 3 or 4 players.

Ken, Brandon, Jacob, and I dropped down two floors to try and get into the final RPGA session. The coordinator was very accomodating and found a judge for us. He did a nice job running it cold (he hadn't reviewed the material before) and we had a good time. This was by far our most challenging adventure of the weekend, having to deal with a number of were-creatures. 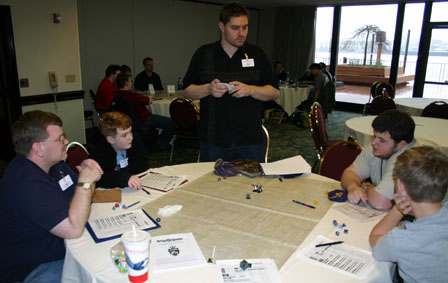 Next I'll post a photo journal of the other games I witnessed at the convention, many of which I had hoped to play but missed out on. I'm still itching to play Manifest Destiny, which I saw played at least three times over the weekend with favorable reviews.