Yesterday (2 days ago?) I made the long journey from Portland to Kuala Lumpur, Malaysia. I departed PDX about 9:45am on Friday morning, flying to SFO. Thanks to United's much improved wireless access (thanks TMobile) I was able to catch up on quite a bit of work in the Red Carpet lounges in both PDX and SFO. At about 1pm I boarded the 747-400 in SFO to fly to Shanghai, China. It has been over three years since I did a flight of this length - over 14 hours. 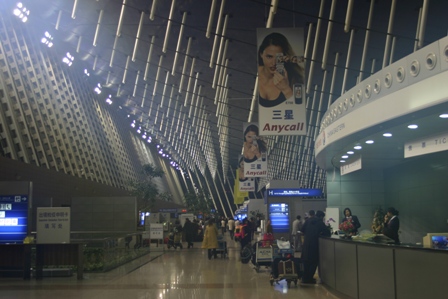 We arrived in Shanghai about 6pm local time (did you know that all of China has the same time zone?) - this is where some confusion set in. The kind flight attendants on the United flight assured me that I wouldn't have to clear customs in China if I was simply transferring to another international flight (turns out I was the only one on this flight doing so!). So I didn't bother to fill out the immigration and customs paperwork. The agent that processed my check-in at PDX had been a bit ambiguous about what would happen to my luggage in Shanghai; I think it is unusual for people to connect to China Eastern.

Upon departing the plane, I was pretty worried about my luggage and I had a couple of hours, so I proceeded to baggage claim to see if it showed up there. Of course it did, so I grabbed it and tried to follow the signs to international transfers. The agent there insisted that I need to go through customs and check in upstairs at the desk. I am heading to Beijing after my stay in KL, so I have a Chinese visa in my passport - this made clearing immigration and customs very straightforward. But what if I didn't have a visa (which would have been the case if I had only been traveling to KL)? I was able to check in for my flight, but before heading to the gate I had to come up with an airport tax of 90 Yuan RMB. This seemed much more complicated than it needed to be, and I'm still wondering if there was a way to deal with this without passing through immigration.

Still, I made it to KL without a hitch, arriving at 2:15am local time, and finally arriving at my hotel around 4:00am. I had managed to sleep for about 6 hours total on my two flights (over a 24 hour period), so I didn't need a ton of sleep. This was good, as my rest was, well, restless but at least I managed 3 hours of sleep. 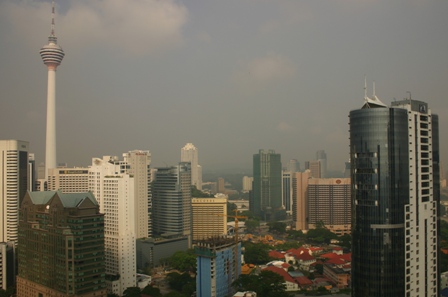 We are in the tropics here, so things are quite warm, and I woke up to a fairly hazy Sunday morning. Today is a day of rest and, hopefully, some recreation with my colleague Trevor who is stationed here.