Or should I say evening 2? The day was spent spending time with Matthew while
Jacob and his team participated in the regional Destination
Imagination tournament - they won!
Matthew had baseball tryouts mid-day, so I didn't arrive at Game
Storm until about 8:00pm. Dave was scheduled to
host a late-night A Game of Thrones
session, and we were a bit concerned that there would be too many players for
a single game. So I committed to bring my own copy and perhaps run a parallel
game if necessary. We ended up with 10 players so this worked out perfectly.

First a few photos from some of the other games happening on Saturday night. 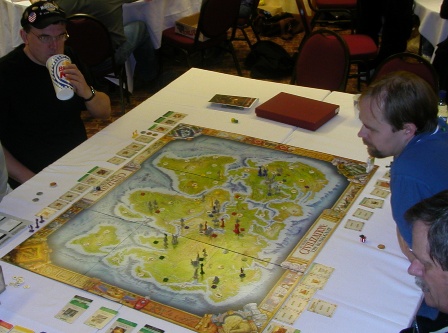 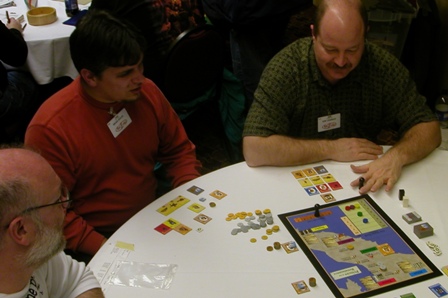 I helped a crew of newbies playing Princes of the Renaissance with a few rules
clarifications. 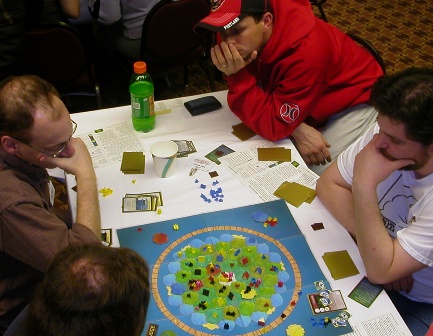 Next it was time for A Game of Thrones! As I mentioned, Dave ran one game and
I ran the other. In Dave's game (he didn't play), I believe Lannister pulled
out the victory with Baratheon getting eliminated around turn 8 or 9. Dave
started explaining the rules around 9:15 and they were underway by 9:45. Their
game ended around 1:15 or 1:30. 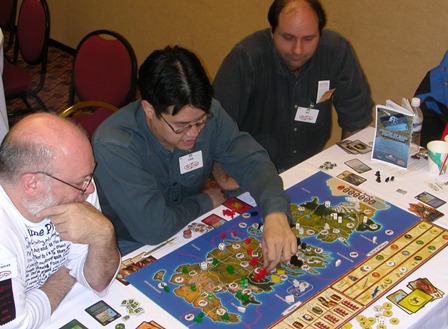 The game Dave administered saw Lannister seizing and end-of-game victory with
the most cities under control.

My group was a bit slower getting assembled, so by the time I was done
explaining the rules (with Kai's help) it was already after 10pm. This was
going to be a late night.

I played Lannister, KC played Tyrell. The game opened with two rapid musters,
so players quickly hit their supply limits. We also saw two early Clash of
Kings, but this did not change the order in any of the categories
significantly. KC played it slow and conservative, gradually working his way
over to capture Sunspear for a valuable supply and muster point. I was able to
make a decent expansion into Harrenhal and Blackwater, so supply was not going
to be an issue for me. My navy certainly was though... 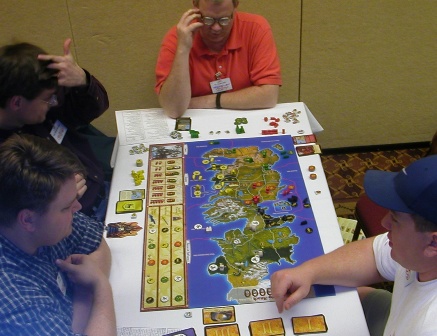 One of Lannister's biggest challenges is getting bullied around in the seas by
Greyjoy, and this was no exception. I made the mistake of investing a bit too
little in my navy, allowing Greyjoy to eventually wipe out my navy. Once this
happens in A Game of Thrones, it is very unusual to see a navy come back.
Mine never did.

Greyjoy and I continued to harass each other, allowing Stark and Tyrell to
gradually build up their support base and prepare for long-range sorties into
our areas. I nearly was eliminated from the game, but thanks to Tyrell
interceding to push Greyjoy away from Lannisport, I was able to resurface and
at least pester the other houses. 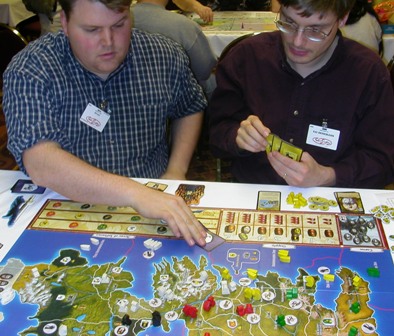 We all agreed to keep private diplomacy to a minimum in this game, so there
was substantial table talk about alliances and threats. I probably prefer the
game to played this way, though certainly private discussions certainly fit
better with the theme and make the game much more of a diplomatic effort.

This game was extremely close. Going into the final round, Stark, Baratheon,
and Tyrell were all in striking distance of victory. The game ended on a
somewhat sour note, however. Stark's final march order was an attack from Moat
Cailin to Seagard which, if successful, would seal victory for Stark. On a
previous march order Stark had abandoned Winterfell (though of course it
remained under his control) to capture another city. Stark had superfluous
units in the attack on Seagard, but marched with all of them still. Greyjoy
was forced to retreat, but was able to do so all the way back to Winterfell
through the use of his western navy. If Stark had just marched one his footmen
to Winterfell in addition to the attack on Seagard he would have one the game.
The Stark player was pretty upset about this, claiming that he wasn't aware
that that sort of retreat would be allowed. Oh well, it was a fun game but a
late night - we finished about 2am.