Today was day 1 for GameStorm in Portland, OR. I had to get there by 4pm to hand deliver KC's New Eden prototype; I thought I gave myself plenty of travel time, but an accident on I-5 cut things close and I arrived just in time. KC was just beginning to explain the rules to New Eden to a group of gamers eager to give it a try. I added some commentary here and there and it appeared to come off without a hitch. 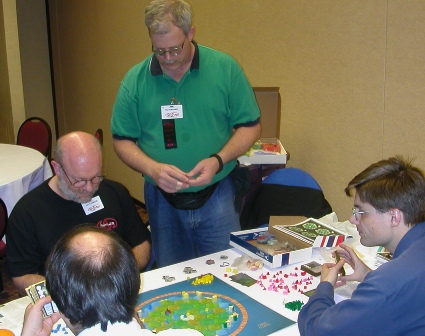 KC teaches a group how to play New Eden.

Meanwhile Mike Deans arrived so we decided to sit down and play. First was an aborted attempt to play Oasis, but unfortunately we couldn't find a third player. Fancy that happening at a gaming convention. So we settled for Odin's Ravens, which I hadn't played before. Fun game! Clearly a bit luck driven, because I managed to beat Mike soundly. 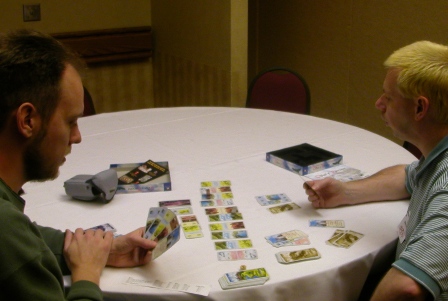 Mike Deans taught me how to play Odin's Ravens.

While teaching New Eden, KC was spending some time mounting and preparing the bits for a new game prototype. More about this later. 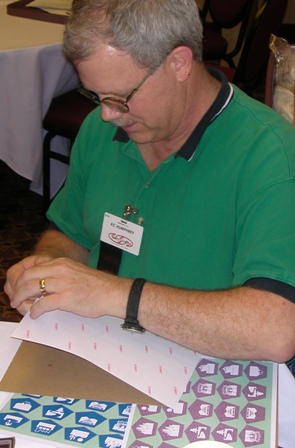 KC multi-tasking. While teaching people how to play an existing prototype, he is also able to design a new prototype in his head while mounting a third prototype.

I was surprised at the amount of gaming already happening when I arrived at 4pm. Dave and Doug were immersed in a series of Knizia games. Apparently there is a Kniziathon tournament with weighted scoring (based on game complexity or length). 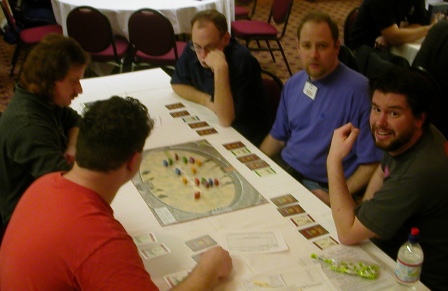 Dave and Doug participated in the "Kniziathon" tournament. Here they are playing Rome: Circus Maximus.

After a brief dinner with the gang, I sat down for a scheduled game of Industria, the relatively new Michael Schact game. This has received some glowing reviews so I was eager to try it. The art work and board design is very nice, and the game play was fun. This is an auction game where players bid to win the right to build a building, upgrade a technology, or gain a resource. There are a number of ways to gain victory points - some buildings have them inherently, tech upgrades, and bonuses. Bonuses come in the form of linkages between purchases (based on adjacency - for example, there may be two linked upgrades that, if you managed to get both, would give you a three point bonus), or categories or buildings that give extra VPs. 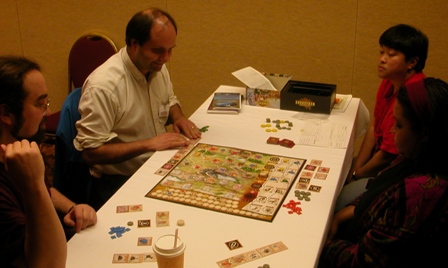 I managed to play one scheduled game tonight: Industria, hosted by Lorna.

Everyone missed a crucial rule that hurt me for one turn and may have put me in last place instead of third (heh): when a player acting as the auctioneer doesn't win an auction, they remain the auctioneer for the next item. In one case, we passed the auctioneer on to the next player. This can hurt quite a bit since it can deprive a player of income or a discounted building. No big deal since this was a learning game. There are a few things I didn't like about the game, mostly related to auctions with goods that were utterly worthless. I would definitely play this again though. 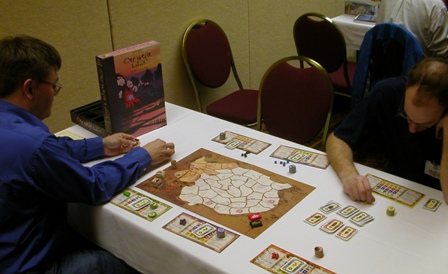 George and Dave patiently wait for a third player to join them in a game of der Weiße Lotus. Unfortunately this never happend.

KC and Jay ran a two-player swiss style tournament tonight, and I donated a few games to fill out their inventory and lurked for a while to help with the rules. 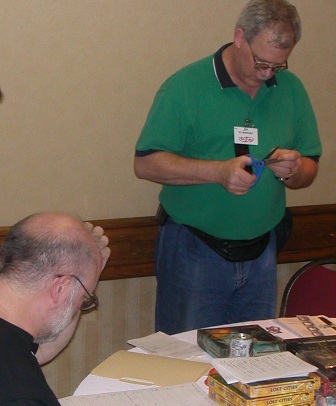 A wide range of games were played in the tournament, including Lost Cities, Odin's Ravens, and Lord of the Rings: the Confrontation. 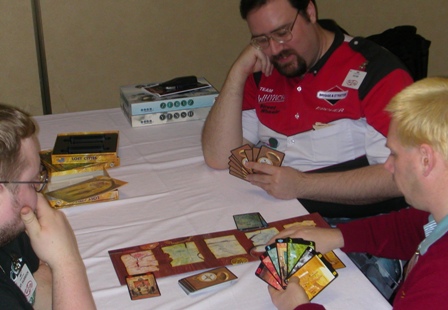 At the end of the evening KC taught George and I how to play his newest prototype, a fairly abstract name tentatively called Cairo after the style of tiles used in the game. More about this game later, but it was very enjoyable to play. Tactical, plenty of random elements, but genuinely fun. 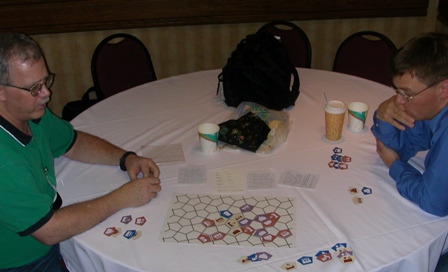