After spending 4 hours this morning at Beaverton Toyota getting my car worked
on (regular maintenance plus some repairs from vandalism at the Portland
airport), I joined Jacob and Matthew at the Rude household for Brandon's
birthday. No photos from that event, though I do have one from our evening
play of Vanished Planet.

Ken and I played the two-player variant of Trias, the game of plate tectonics
and dinosaur migration. There have been some complaints about the theme of
this game, claiming that it is too dry or abstract. I love the theme! I can
visualize the continents forming and the dinosaurs migrating (and swimming).
This game plays better with more than two, but we had a good time and a very
close finish with my just edging Ken out.

This is now my favorite version of Carcassonne. I like the scoring in this as
there appears to be more equity between the rivers and forests (as opposed to
the roads and castles in the original). The addition of the bonus tiles adds a
fun dynamic. This was a close game as well, with me beating Ken by less than
10 points in a 120+ point game.

Ken, Tracey, and I played a single hand of Coloretto, with Ken winning the
hand with 37 points.

Jacob, Matthew, and I broke out my new copy of Vanished Planet. Feedback on
this cooperative game has been very mixed, but it is a winner in our house.
The boys absolutely love the theme, and cooperative games are a great family
activity (especially in a competitive household like ours). 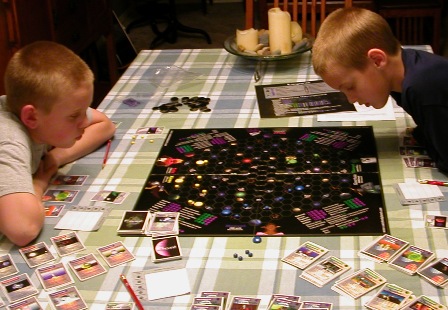 Matthew summed up the critical flaw with this game perfectly: "I keep
forgetting what the symbols are." This game could be so much better with
improved usability! One task I've given myself is an improved quick reference
card which I plan to post before too long. We played on the easiest setting
and managed to win the game, thanks to a few well placed mines to hold of the
Creature. We scored 17 goal points.