We welcomed a small crowd into our home again this weekend for some gaming on Sunday. Gameplay lasted from about noon until 8:30pm, and we were fortunate to once again host David Chapelle from Atlanta.

George was nice enough to bring by his copy of Checkers 2000, an interesting checkers variant that Julie and Matthew tried while the rest of us played Domaine. Feedback was favorable on this game, and George is letting us borrow it for a while so I can play with each of the boys. Matthew beat Julie, with the fatal blow being a late game triple jump. 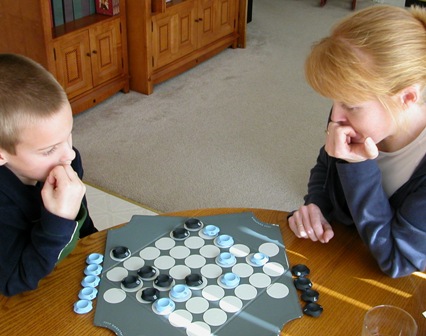 Julie and Matthew try out Checkers 2000.

DavidE, George, Jacob, and I quickly jumped into a game of Domaine. This was the first four-player game for me (I think any of us), and while George was familiar with Lowenherz (Domaine's ancestor) he had not yet tried Domaine. So David and I quickly explained the rules while we setup and we launched into the game. 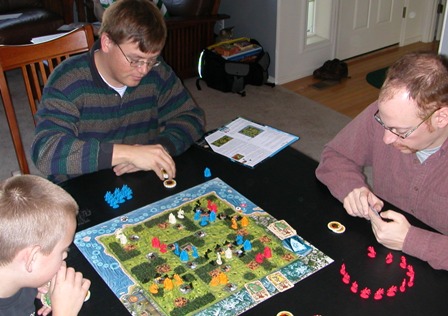 Jacob, George, and David contemplate the early game positions. Jacob (white) was quick to grab a valuable middle board spot with three different mines. I (orange) had the luxury of a corner to myself.

Play proceeded quickly - we finished the game in about exactly an hour. George was a bit too slow in getting his first domain (and therefore any income source), and Jacob was immediately put into a defensive position with his valuable domain which caused him to neglect his other castles. So it was mostly a raise between David and me. As the game drew to an end, David pulled ahead with some strong expansions into my territory (pulling me down and pushing him up). He got too far ahead for me to catch him though it was a fairly close finish.

As the others arrived, KC put together a game of Royal Turf, joined by Chuck, Matthew, Julie, Mike, and DavidC. Julie was the big winner. 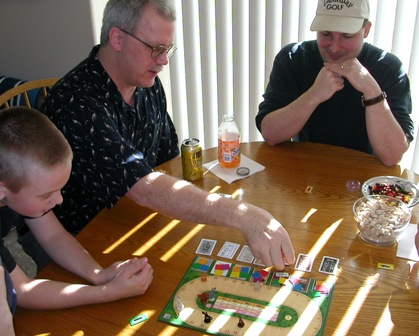 DavidE, Jacob, DavidC, and Mike played Coloretto. I'm fairly certain DavidE won (since he has something like a 15 game winning streak in multi-player games!). His feedback on the game itself isn't too favorable though:

I think there are other quick & light fillers that are more intellectually rewarding: Zircus Floheati (or whatever it's called); Money; Loco!; Katzenjammer Blues. Oh yeah, those are all by Knizia... Still, if others wanted to play this while waiting for other gamers to arrive, I wouldn't outright protest. 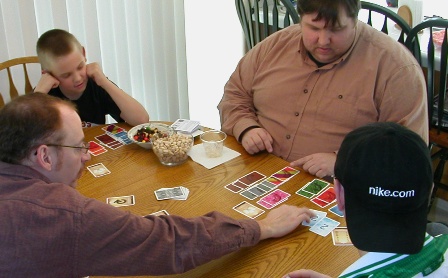 DavidE, DavidC, and Mike then squared off for a game of Attika. This is one of my favorite newer games so I'm sorry I missed out on this one. From what I saw, the game ended pretty quickly with a temple-to-temple victory. It will be interesting to see how this game changes as players get more experienced in blocking this sort of victory. 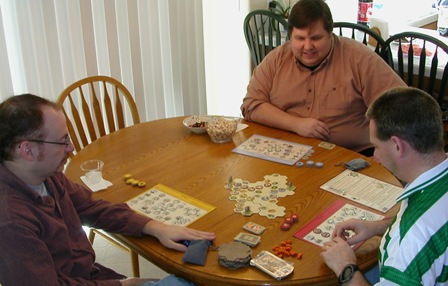 DavidE requested to play another game of New Eden 2, the wonderful new prototype from KC Humphrey. I'm sure KC loves hearing someone ask for his game by name, but he deserves the recognition for the good work he is doing. 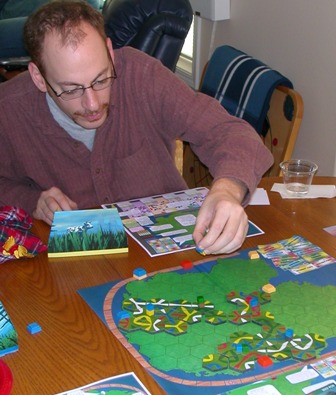 Princes of the Renaissance

A few folks were interested in trying out this Martin Wallace game, and since I had played once I offered to teach it. Chuck had also played this once.

In this case, we had a serious problem with a runaway leader (George). George accumulated a combination of tiles that gave him a 3-point discount when bidding on the condotierrie role. This meant that he was able to fight in nearly every battle, often winning because of his troop strength. He accumulated 6 (!) laurels by the end of the game, netting him an extra 20 victory points. This was more than enough to secure his victory - a well played game by George. I suspect if the rest of us had been a bit more alert we could have prevented it, but by the end of the 1st age most of us were predicting him as the winner. 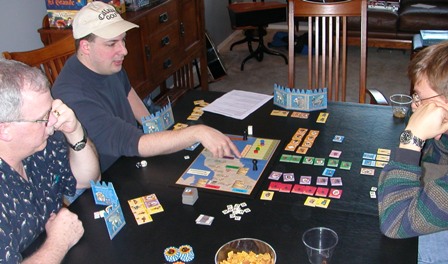 I was disappointed to miss this game, but I offered to teach Volldampf instead (I love that game too). Apparently, via some skillful negotiation, DavidE was able to pull out the victory. 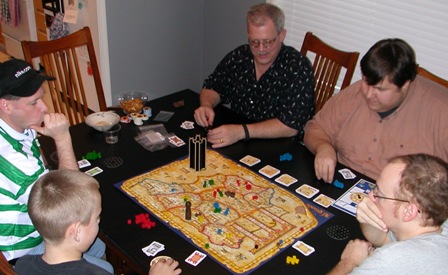 I taught George, Julie, Matthew, and Chuck the train transportation game of Volldampf, another Martin Wallace classic. This game is similar in many ways to its descendent Age of Steam, but offers simpler mechanics and shorter gameplay.

Matthew had a challenging time understanding the mechanics - this is probably too much game for him. It also made him very susceptible to coaching, and since he took such a liking to Chuck he started working to find routes that benefitted Chuck as well as himself. 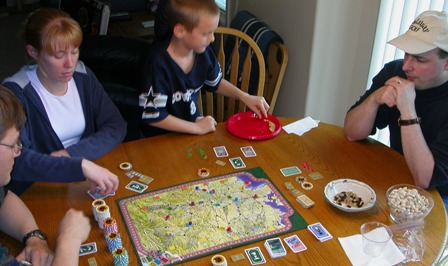 With five players, each player will place a maximum of only 8 tracks, and during each turn only two can be placed. I'm not wild about the game with this many people - the two-track limitation slows down income production and reduces the number of options.

I was way behind for the first few turns, but staged a strong comeback. My debt situation prevented me from being a serious contender though, and Julie pulled out a 1 point victory over Chuck.

We pulled out our $10 Amazon special crokinole board for some finger-flicking fun. 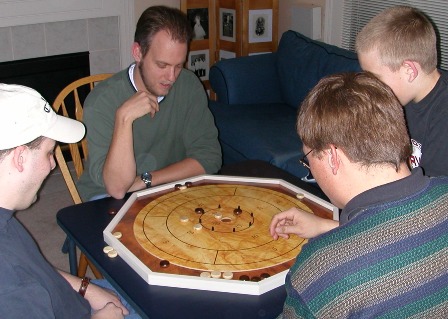 Jacob taught George and DavidE his Star Wars themed prototype named Vector Prime. This game is similar to Star Wars: Epic Duels, with some card and dice- driven combat. Jacob hand-made the components and is a great first attempt for him. I appreciate the attention David and George gave to his game, including some valuable feedback. 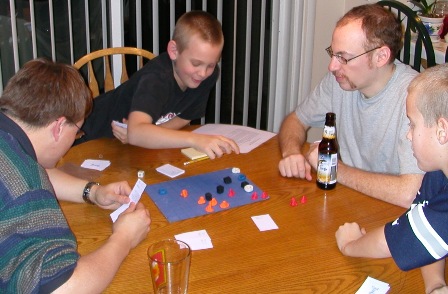 Ark of the Covenant

We had a hard time settling on a game to play, and a couple of folks wanted to see Ark of the Covenant, the Inspiration Games release in the Carcassonne family. This is just Carcassonne with a few twists thrown in, not unlike the various expansions released over the past few years. Carcassonne is a great game with 2-3 players, but with 5 there is way too much downtime and chaos for my liking. Oh, and DavidE won (again!) with me about 5 points behind in second place. 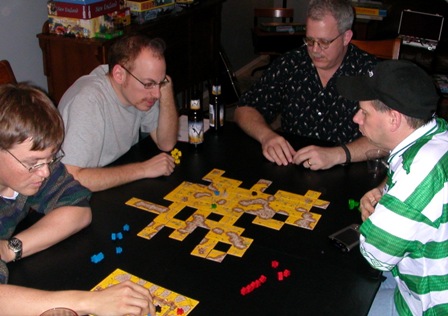 I asked to play this game, having heard so much praise and knowing that there is a re-release coming from Fantasy Flight Games. These guys were obviously pros, but were fairly kind during this learning game. This is a very enjoyable game and I look forward to seeing the new release. 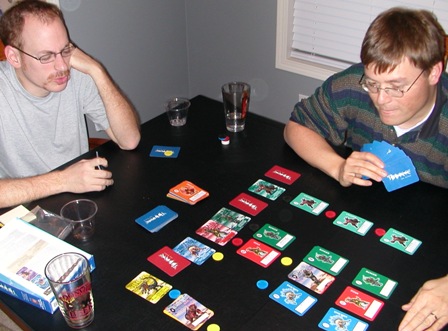 The evening ended with KC teaching my family another of his recent prototypes. Pizzza (I hope I included the correct number of Zs) is an easy to learn family game with simple mechanics. Everybody enjoyed it - Matthew even gave it a '9'! There is a tile laying and connection mechanic similar to New Eden 2. My only suggestion is to improve the artwork a bit to make it easier to distinguish the different ingredients, and to make scoring markers that better align with the ingredients. Another winner from KC! 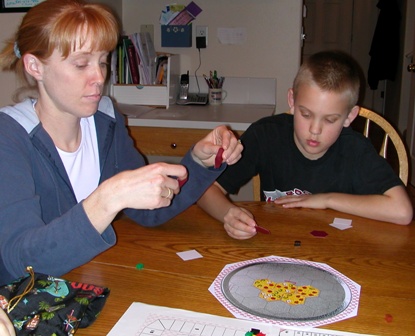