Ok, round 2 of trying to make this post. As much as I like dasBlog, the browser based editor can drive me nuts. I was 90% through this session report when I accidently clicked the back button, losing all of the content. I'm sure I'll write this much more eloquently the second time around. Greg Hughes gave me some good tips on using Outlook to compose and post directly into dasBlog, so maybe I'll start using that.

Last Thursday I joined the RipCityGamers for Die Hard Thursday - so named because it is usually a smaller turnout. Not so this week - there were 8 of us, including our guest David Chapelle from Atlanta.

Half of us split out for a game of New England, one of my favorites. David, Doug, George and I tried to be the most successful pilgrim on Plymouth Rock. David had never played it but picked up the mechanics quick enough to make a very decent showing. With four players things are pretty tight - many more opportunities to conflict with other players than in the three player game. It was a balanced game that came down to the last round. Three of us were tied for the barn majority (I already had the most pilgrims), and turn order played to my favor as I was able to grab the 10 spot and go first, grabbing the last available barn. This was a substantial point swing and allowed me to the game with 31 points. David came in second with 28 points and Doug edged George out in the tie breaker at 26 points. If the turn order had been different, or if George was able to take the 10 spot (he had only 8 shillings), it would have been even closer. 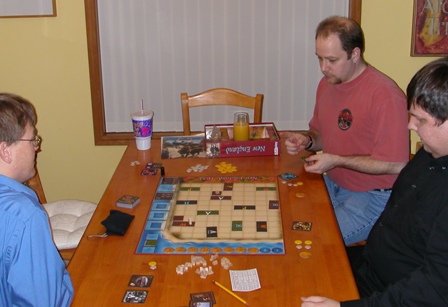 I still haven't played this game, but DavidE gave a brief report:

The buzz on Maya is that it's a blend of familiar mechanisms with a fairly pleasant outcome. As blind bidding was one of those mechanisms, it probably will never make it into the common rotation, but it was definitely decent. 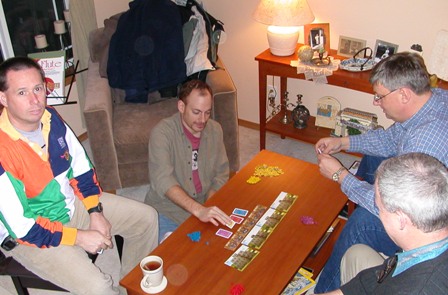 This is a game I had never seen nor even heard of. Feedback was favorable though, with George reporting:

Peter taught this little game to Doug and I. Simple rules, simple concept, but not so simple to master. doug and I made the rookie mistake of placing lots of tiles early in the game only to give Peter good spots to put his men down. Very lopsided scoring was the result.

Luckily this game plays very quickly. Including teaching it took us 15 minutes to complete our first game so we gave it another go. This time Doug and I knew better than to place tiles early on which resulted in a final score of 44, 45, 56. 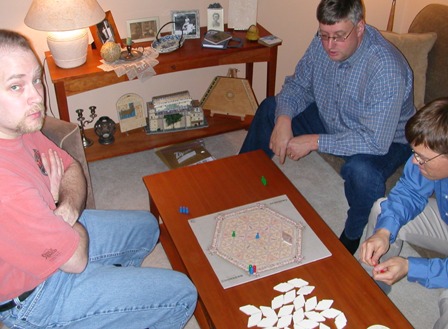 Next was an opportunity for a few of us to play KC's latest prototype New Eden 2, the successor to the game New Eden. New Eden 2 is a very different game, with only the theme in common with its predecessor. Think of this game as a zoom-in on one the hexes in New Eden.

New Eden 2 is essentially a tile laying game where players are trying to build roads of a sufficient length to allow them to build buildings. Each building consists of two colors, and each player has a hidden goal of two colors that he is trying to build (important but not critical - it just gives bonus points for each building containing those special colors). This game borrows from mechanics in a number of games I've played, including Carcassonne, Attika, and TransAmerica. But don't get me wrong - this is a very unique, fun game to play. It certainly doesn't feel like a prototype since the bits were all very high quality. 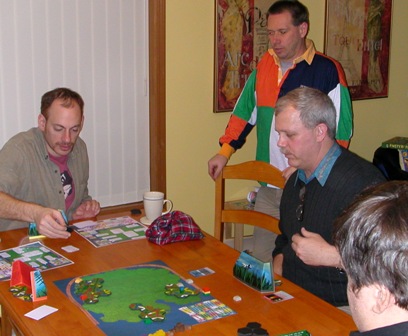 DavidE and I were in the lead most of the game, partly because we joined roads early on and were able to build off of each other fairly regularly. DavidE pulled out the victory in the end, with me a close second. 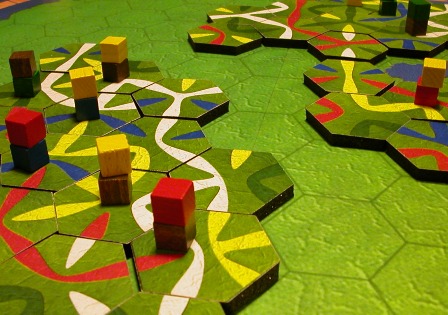 DavidE had some high praise of the game (including some valuable feedback for KC):

...it is definitely Thumbs Up, and, in my opinion, perfectly publishable as it is, and as good as any mid-weight game released in the past year. Sure, you could tweak a subsystem here or there just for kicks, but dammit this game should be in print!

I tend to agree with David on this point - this game doesn't need much more work and it is certainly better than a number of games I played over the past six months. Nice work KC!