On my way home to Portland from Seattle on Thursday, I stopped by the
Uberplay Entertainment headquarters in Issaquah.
Almost a year ago Jeremy Young, invited me to come see his crew and some of
the great things they were getting ready to ship. That certainly turned out to
be a prophetic statement, since they had a banner year. New England won the Games Magazine "Game of the Year 2004" award and Wildlife won "Advanced Strategy Game of the Year 2004" so
they are clearly on a roll.

I love visiting game manufacturers - there is such a spirit of entrepreneurism
at this companies. Many do it as a labor of love and are fortunate to break
even or take a small profit. I get the clear sense that Uberplay has loftier
goals, and given the talent they have at the helm (Jeremy, Matt Molen, and Guido Teuber) they have a great
shot at achieving their goals. Ultimately their business will succeed or fail
based not only on the quality of the games they produce, but also the quality
of their marketing strategy. I think their approach of marketing to the broad
religious sector and narrower (but still huge) Mormon market (Inspiration Games) is brilliant. Believe me, they are
selling many more copies of The Settlers of Zarahemla than they are New England.
That's fine by me - though I have no interest in playing the Mormon-themed
games, if those sales can underwrite new mass appeal boardgames then we all
win.

I asked Jeremy if I could show them KC Humphrey's New Eden prototype to
solicit feedback, and he gracefully obliged. Guido, Jeremy, and I sat down for
a partial game so that I could explain the theme and mechanics. I am grateful
for their time and attention and they were able to provide some very valuable
feedback that I am taking to KC. 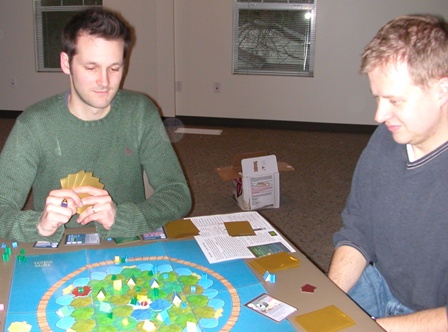 Unfortunately I was unable to get my hands on any of their upcoming new releases (Oasis and Tongiaki in
particular) - they needed all of their available copies for the upcoming Toy Fair in NYC. I did get a nice
consolation prize though - Jeremy donated a slightly damaged copy of Ark of the Covenant, a nice variant of
Carcassonne.