I travelled to the Seattle/Redmond area this week for business, and managed to squeeze in some late-night gaming on Wednesday evening. Tom Powers from Boards & Bits was kind enough to invite me to join his group, a collection of mostly Microsofties.

I requested this before my arrival, having played it once on BSW I was eager to see it in real life. It certainly is a pretty game, and has some interesting purchasing mechanics. The goal of the game is to build a courtyard out of tiles and gain majorities in as many different colors/styles of buildings as possible. There are walls on the tiles which also factor into scoring, as players get points for the number of connected outer wall segments. Walls also constrain the building of tiles, since every open space must be connected to the center of the courtyard (i.e., no walling off). 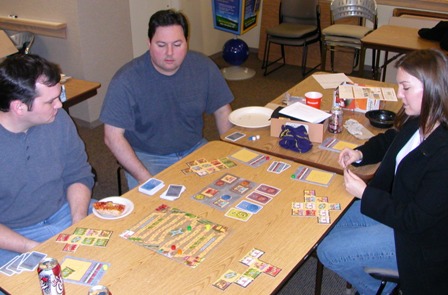 On a player's turn they may either pick up some money (there are four different types of currency) or purchase a building. To purchase a building, you must pay at least the value of the building in the specified currency. If you are able to pay the exact amount, you get to take another action. If you are forced to pay over the amount, you don't get change and your turn is ended. One of the key strategies of the game is accumulating the best set of currency that will give you flexibility when purchasing. 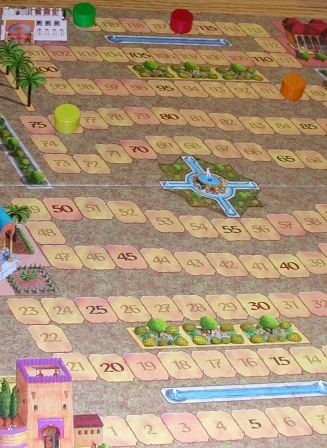 This game is fun, but for a few reasons I doubt I'll purchase it. First, there are some human factors issues - too many colors at play, with color schemes for both building types and the different currencies. I found myself checking and rechecking my hand and the buildings for sale to see if I could purchase them. Others in the group shared similar concerns. Second, the luck factor is a bit too high for me. The game can swing greatly in one player's favor depending on both currency and building draws. This is true of many games, but for some reason it bothered me more in this game.

I didn't play Tichu, but one group of four played for a few hours and seemed to be having a lot of fun. I haven' played this game, but I do enjoy trick taking games and have played a few that are similar to this (like Gang of Four). 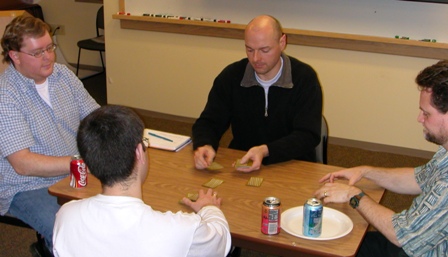 Tichu was played most of the evening by this group.

Dave then brought out his prototype of a simple stock trading game. Tom, Nick, Sharry, Dave, and I played. 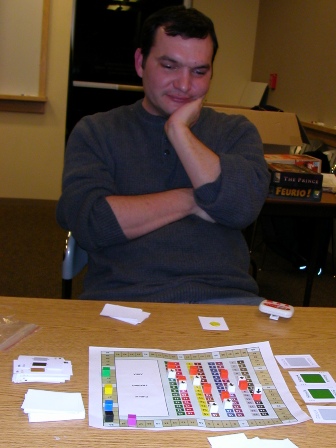 This is a fun little game. The game plays in four trading days. At the start of each day, each player decides whether to sell short (hope the stocks go down) or long (stocks go up) for the day. Within the trading day, players accumulate stock cards for 1 of 8 companies in 4 different sectors. Each player in turn plays action cards which affect the market, sending stocks up or down. The action cards are designed to be balanced (i.e., net zero change if you sum them together), but since they often give players choices of which stocks to send up or down, each game will play differently. At the end of the trading day, players earn money based on how far their stocks climbed or fell, multiplied by the number of shares held of those stocks. 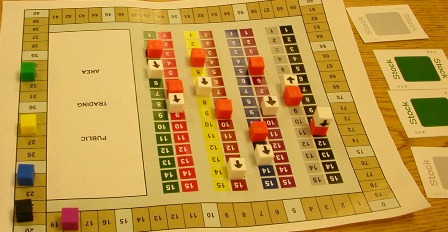 I enjoyed the game, though there was some discussion afterwards about some ways to make the scoring less linear. It seems to easy for one player to pull very far ahead if the stock goes up a 5 or 6 notches. A few ideas were shared, including income reduction (ala Age of Steam), a progressive daily tax (i.e., the more you make the more % tax you pay), or a non-linear trading scale (similar to Acquire). Hopefully I'll get a chance to play this again after he tweaks it.

A few of us diehards stayed to play Attika, the game of city-state building on the Greek peninsula. The game is gorgeous and was my favorite of the night. There are two ways to win - build all of your buildings, or build a contiguous string of buildings between two temples. Buildings are built using a typical resource model (like Settlers of Catan), but there are some interesting tweaks that make this game much more interesting: 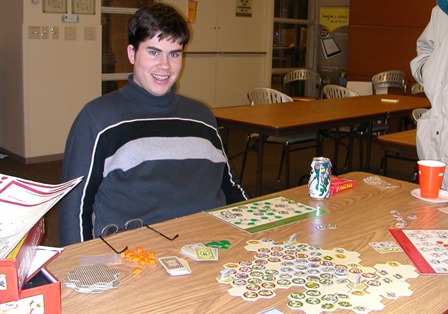 I didn't do too well in this first playing. Tom made a comment at the start of the game that it is rare to connect two temples unless playing with newbies. I suppose he was right, because he ended up winning in this manner! He was closing in on his second temple from two different directions, and I was scrambling to cut him off. In doing so, I also cut off Nick, preventing him from supporting me.

I liked this game so much I purchased it the next day from Boards & Bits. Julie and I played a two-player game Friday evening - the rules are very simple and easy to teach.