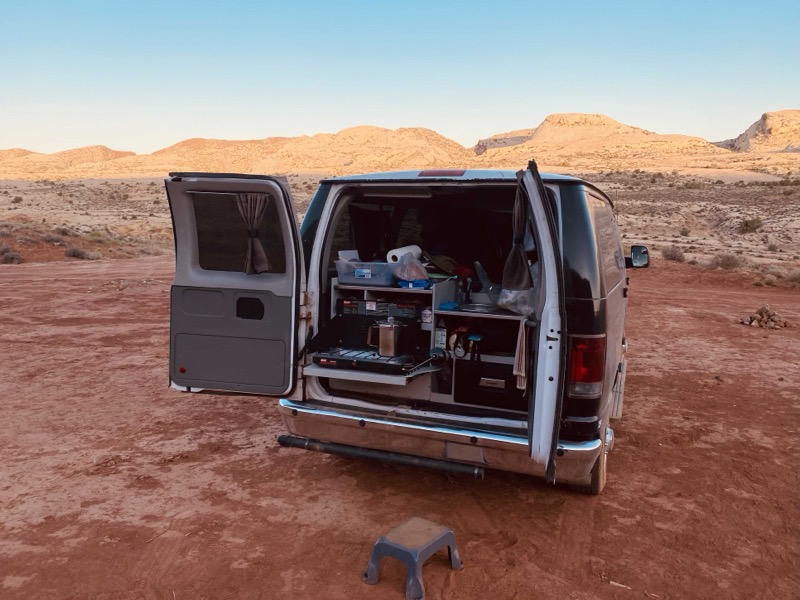 In a word: amazing. Better than expected with surprise ancillary benefits. 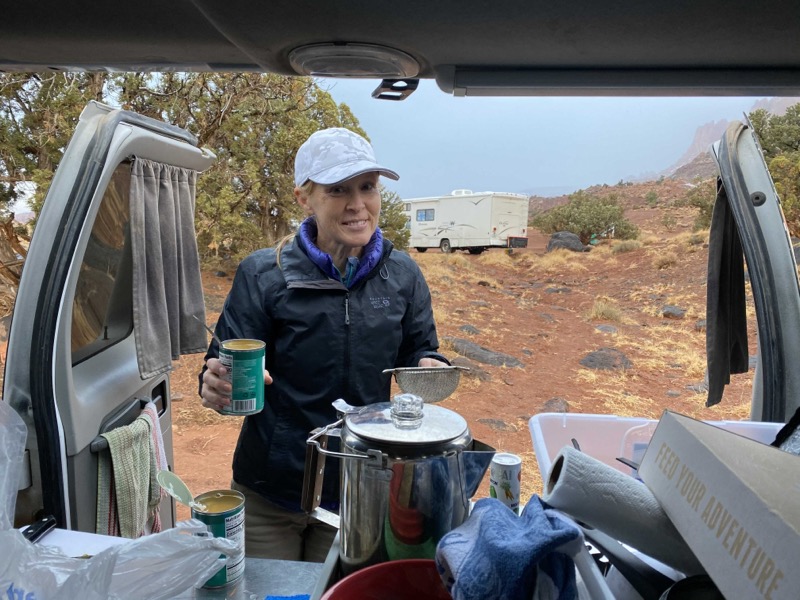 We rented an Escape Mavericks van for three weeks, picking up and dropping off at their Las Vegas location. Julie and I did extensive research, trying to balance comfort with expense. We could have gone for a Sprinter van and paid more than double our cost (roughly $100 per day), but we figured the smaller Ford E-series based van would be a good way for us to judge value and experience.

These vans are far from new. Ours had nearly 300,000 miles on it, and in some areas showed its age: some speaker covers missing, a broken drink holder in the back, etc. That said, the ride and reliability during our three week adventure was better than expected. We had some small issues with the fold out bed towards the end of the trip – the bolts on the angle brackets holding the bed hinge started to pop off. This was likely due to some of the dirt road driving we were doing, which was more than we originally planned and likely not 100% in alignment with their policies:

Driving on unpaved roads, dirt roads, restricted areas, and ‘off road’ areas is not in compliance with Escape Campervans insurance and other vehicle warranties. If you get stuck, you are responsible for any expenses related to getting the van back to paved roads.

We weren’t going anywhere that we saw everyday passenger vehicles going, but there were some long washboard runs we made, particularly in Canyonlands and Escalante. Judging from the plethora of Escape vans we saw on the very same roads, my take is that their guidance is more about limiting their liability than it is prescriptive direction.

Being older also meant the van didn’t have Bluetooth for the phone or audio. I picked up a Bluetooth / aux adapter at a Walmart early in the trip which simplified listening to music / podcasts / books during the adventure. This also allowed me to keep our phones always plugged in and charging while driving, which was an important consideration (ABC: Always Be Charging). 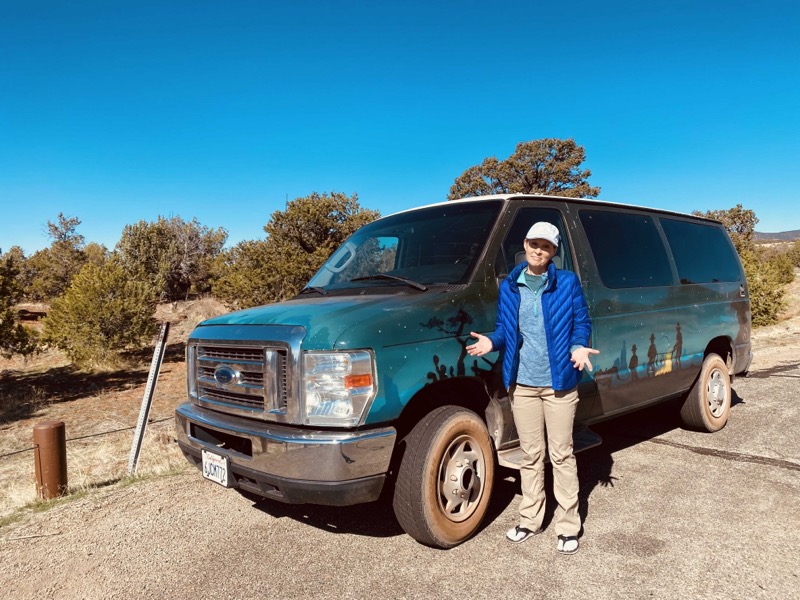 The campervan superpower is the ability to place your camp close to the start of the next day of adventuring, with virtually zero cost in breaking down and setting up a new camp. Contrast this with our “cozy car camping” setup of two years ago, which had us setting up a 6 person REI tent with cots and a table. That was a 1 hour process minimum on both ends of the process, discouraging us from staying in one place for anything less than 3 days. In some cases we found ourselves parking at the trailhead for the following day’s hike, an obviously nice convenience which allowed us to frequently be the first ones setting out on the trail.

The rear of the van holds a kitchen galley, including a pull-out shelf with a propane stove, a pump-action sink, and the most amazing feature of all: an electric refrigerator that operates off DC power via a battery charged from a solar panel on the roof. We have a high-end cooler (Otterbox, similar to those giant Yeti coolers) that we love but it still takes a constant stream of ice blocks to keep it cool. And the stuff inside eventually gets wet. This fridge was more than enough for our supply of food for 5-7 days. 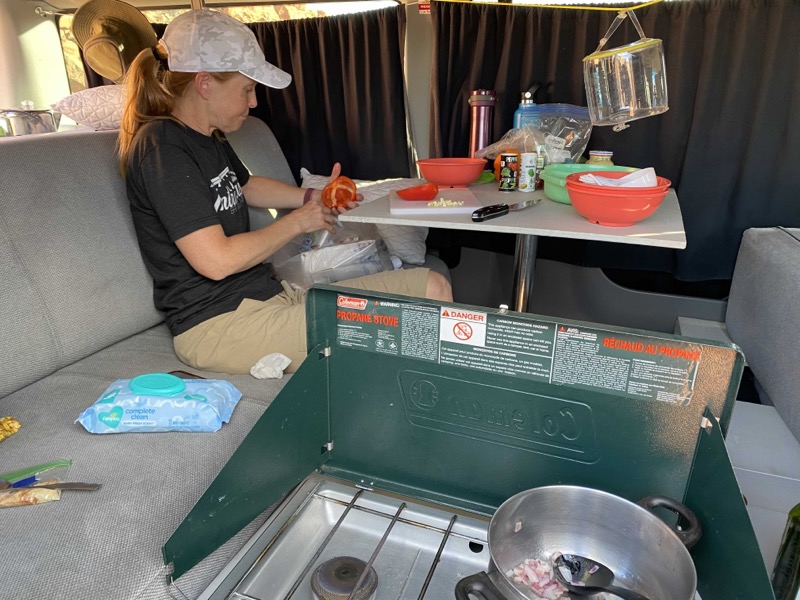 The stove was a standard Coleman two-burner propane, and once we found ourselves moving it partly inside the van on the side to deal with some difficult wind. We added on the kitchen kit with our rental, which included a functional set of plates, bowls, silverware, and cooking utensils. We also had our Jetboil backpacking stove, which we often used for coffee on mornings where we wanted to get a faster start than a 20+ minute percolator coffee batch would allow. 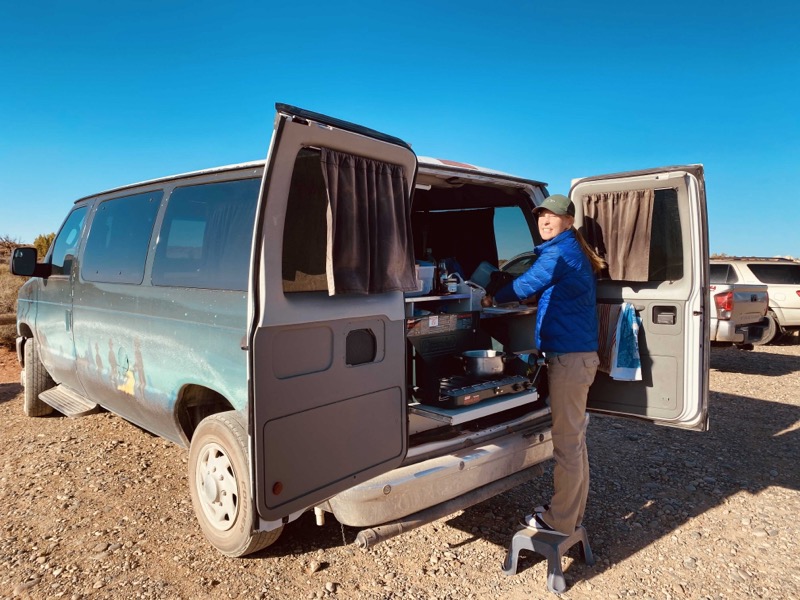 After our first night with the van, we picked up a small step stool at the Walmart in Hurricane, UT to help with doing dishes. The sink was just a bit too tall for either of us. 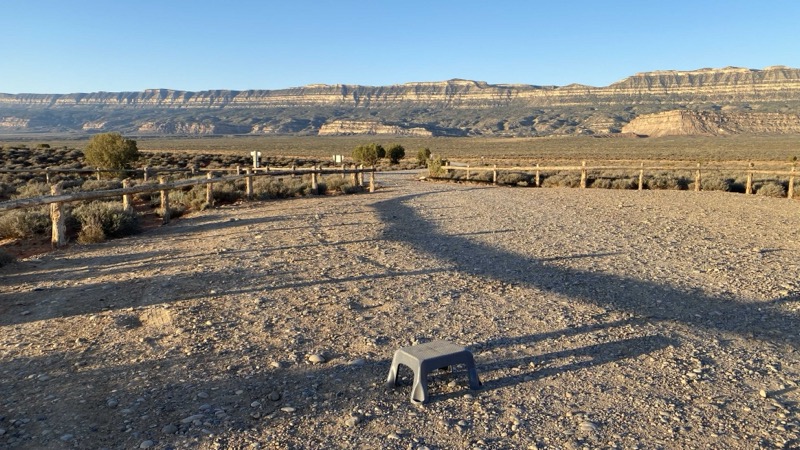 It became an important move-out step to remember to put the stool back into the van, however. We almost didn’t when leaving the trailhead for Peek-A-Boo and Spooky.

The bed was very comfortable. We also rented the “bedding kit”: a fitted sheet, duvet, and two pillows. We were worried that this wouldn’t be warm enough for us so also kept my down quilt handy, which was helpful on many of the colder nights that dropped into the high 20s - low 30s. Also on hand were two extra pillows which helped for reading and media consumption. 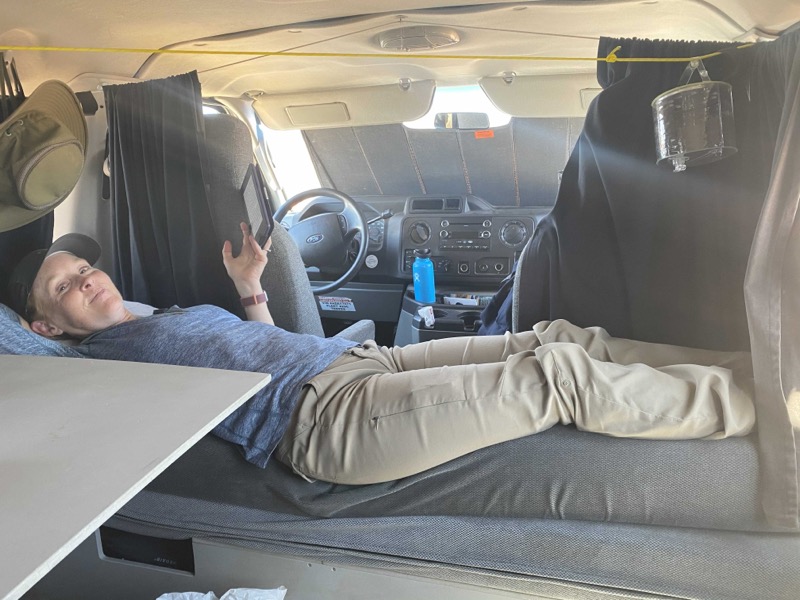 A van like this essentially lives in one of two modes: sit-at-the-table mode, or sleep mode. The table ostensibly had bench seats on both sides of it, but we found the front (rear-facing) seat barely usable so mostly sat side-by-side. One exception: it was a good napping spot for the skinnier of the two of us. Conversion between the two modes takes about 5 minutes or less, and we alternated duties depending on who was getting up to make coffee, who still needed to brush teeth while the other made the bed, etc. It helped to push the front two seats as far forward as possible (honestly necessary for me to have room to stretch out my feet), and this still allowed us plenty of room to store our plastic bin and backpacks in the front.

I strung some parachute cord across the top of the van in the sleeping area so that we could hang our lightweight solar LED lamp for interior lighting without having to use the car battery. Only the fridge and a single LED lamp over the kitchen galley were powered from solar, so we were very conscious of avoiding using any battery-draining accessories while not driving.

Our experience was positive enough that I think I’ll have a hard time going back to tent camping for a regular excursions like this Utah adventure. I still love backpacking and value getting deep into areas inaccessible by car campers, but the comfort and ease of transition from sleeping in the van to grueling day hikes was a great fit. 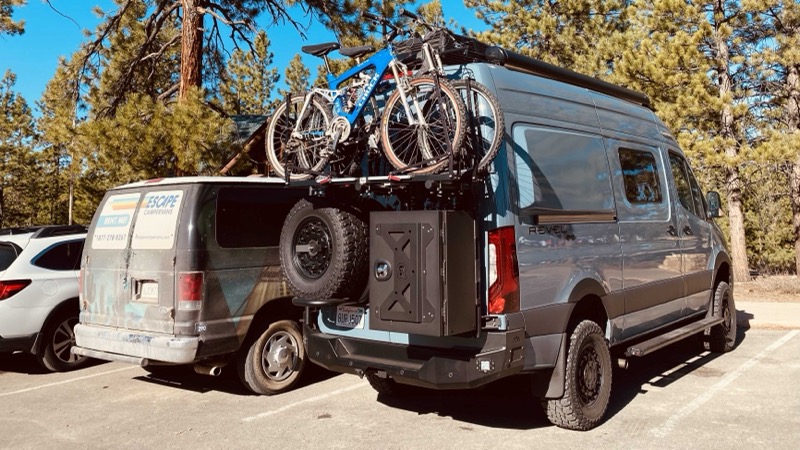 All this to say that in my head we’ve already made the big move and purchased our own van. We still have research to do, and Julie isn’t 100% on board yet. Even if we don’t go this direction I suspect we’ll repeat a van rental. In the photo above you can see one of the leading candidates, the Winnebago Revel. So far we’re researching:

Not having the experience to trick one out in custom fashion, I lean towards one of the first two options. We’ll see.