I played the light wargame Defiant Russia over the weekend, solo, and have some commentary to share. I landed this copy about a year ago off a prize table and own the original version from Avalanche Press. There’s an updated player’s edition available from Avalanche which changes the map and counter mix quite a bit, presumably for the better. 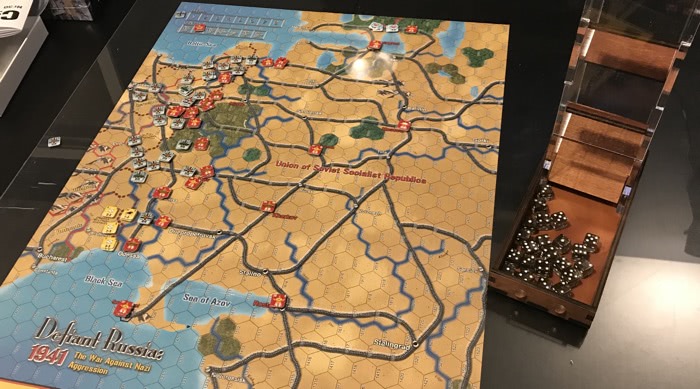 The game is pitched as an easy to learn, old school hex-and-counter depiction of WWII east front action starting with Operation Barbarossa. My solo play exhibited the classic opening you see in games like this: vastly outmatched Soviets that get decimated by German infantry and armor. The Soviets replace units like mad and anxiously try to patch up broken lines to mitigate possible German breakthroughs. The game was easy to learn but not without some problems. If you want a learning wargame that covers a theater like this and can play in about 2–3 hours, this isn’t a bad choice. The new version seems overpriced at $44.99 retail, however, especially when compared to an alternative that I’ll mention shortly.

What Problems Did I Have?

The rules and setup are full of gaping holes, and you can get a glimpse by checking out this Q&A thread with the publisher. I personally struggled with a few things:

The exploitation phase has some elegance to it, and really is necessary to allow for the blitzkrieg style breakthroughs you expect to see in a game like this. I like having a few leaders present that can modify attacks and add a bit of fun chrome to the game. The supply rules were easy to follow and seemed effective, encourage good tactics.

Is There a Better Choice Out There?

For a similar price point (assuming you are looking at the new version), with similar complexity and play duration, it is hard to beat No Retreat: The Russian Front. The production value is outstanding in this game and it is very approachable. I remember playing it with Matthew a few years ago; it might have been his first hex-and-counter game. That said, if you can get your hands on the original version for a low cost, the small footprint of the game is nice and there’s certainly a good game inside. Just be prepared to spend time researching rules.