I go through odd but apparently predictable gaming cycles each year. Julie and I were on the road and in Ireland for about two months from late August to late October, and hardly a game was played during that period. Now that I’m back, I’m all in with a vengeance and playing multiple games each week, including some bigger and longer games.

I’ve been tracking the games I play for many years and this year really isn’t any different from past years. Last year I didn’t log a single game played from August through October. The reason of course is football coaching for the past 10 years. So the reasons this year might be different, but the result is the same. I dive back into gaming full force every November. Let’s talk about some games I’ve been playing lately. 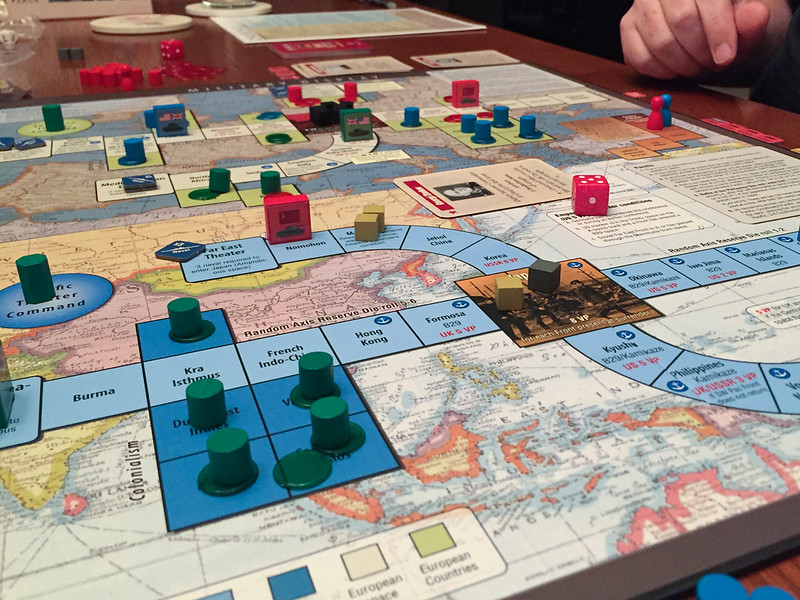 Churchill is the long awaited (by me anyway) three player strategy game about the WWII conferences involving the three major allies. So Stalin, FDR, and Churchill. And maybe Truman and Clement Attlee. I’m three plays into it now, including a 9 hour campaign scenario, a 5 hour tournament scenario, and a 2 hour teaching game just yesterday. Churchill is wacky as a game, and I think it needs to be viewed as an experience as you learn it. Mark Herman took an interesting and I think innovative approach to victory points and winning conditions but for mortals like me they aren’t comprehensible the first few plays. That’s because the game is “co-opetive” and hence has the odd tension of struggling together to beat the axis while trying to maximize your personal position leading into the post-war world. For me, though, playing a game like this is an immersive experience where I care less about the outcome and more about the role playing and fun with my friends. 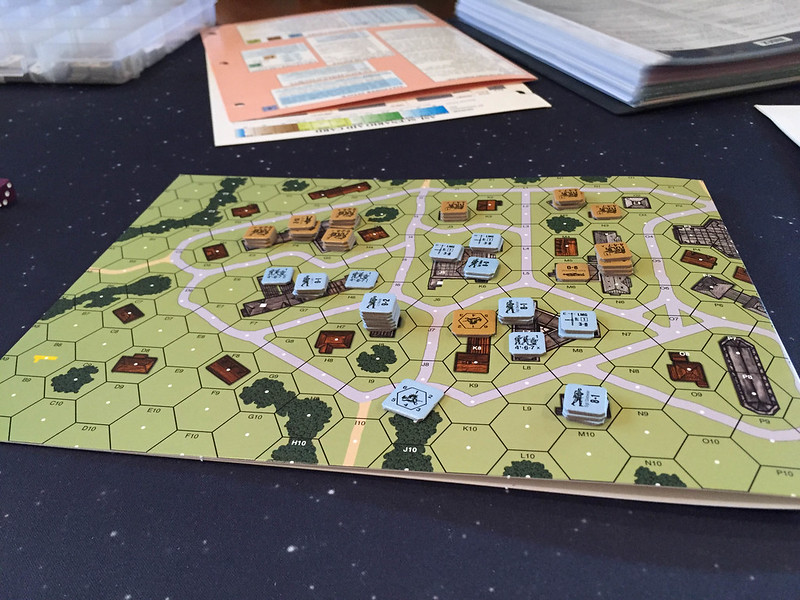 Doug and I continue our immersion into Advanced Squad Leader. We are in the midst of a transition from the starter kit rules to the “big boy” full rules, so we’ve gone back to simpler scenarios without vehicles or big weapons to ensure we have the core infantry rules right. It helps that we kept our momentum even while separated over the summer, playing on VASL and Skype while I was in NY. This is a total nerd out in terms of complexity and learning time, and while humbling at times we are enjoying the ride. 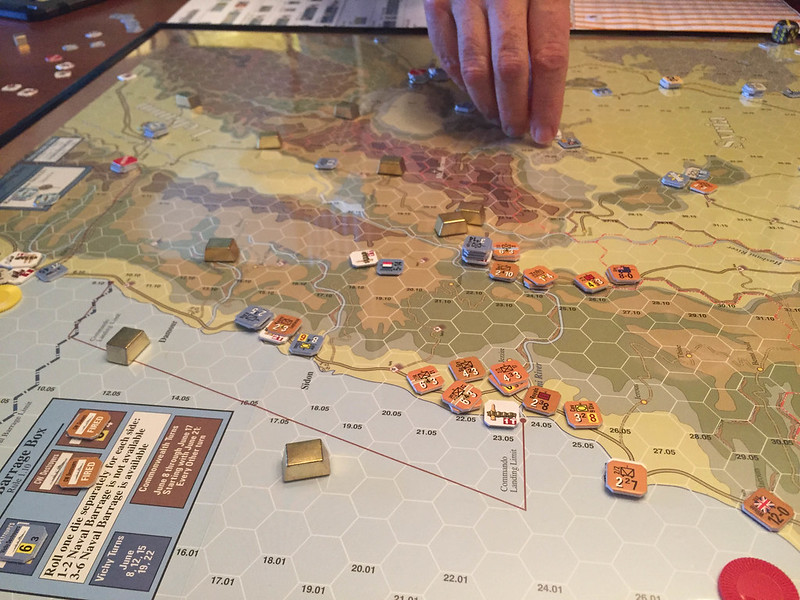 Speaking of complexity, someone decided that just pushing around a bunch of cardboard counters to simulate conflicts at the operational level doesn’t quite cover the real issues that commanders would face. Those real issues are logistics, not strategy or tactics.

This is the origin of the Operational Combat Series (OCS) games, and I had my first taste this month playing the introductory level game Reluctant Enemies with new gaming buddy Allen. The game covers early WWII action between the UK (and UK Commonwealth forces) and new enemy the Vichy French in the middle east. We got about two turns into the game but I learned enough to understand the basics and have a reasonable understand of how to manage supply. We have a date for what we hope to be a full play this coming December. 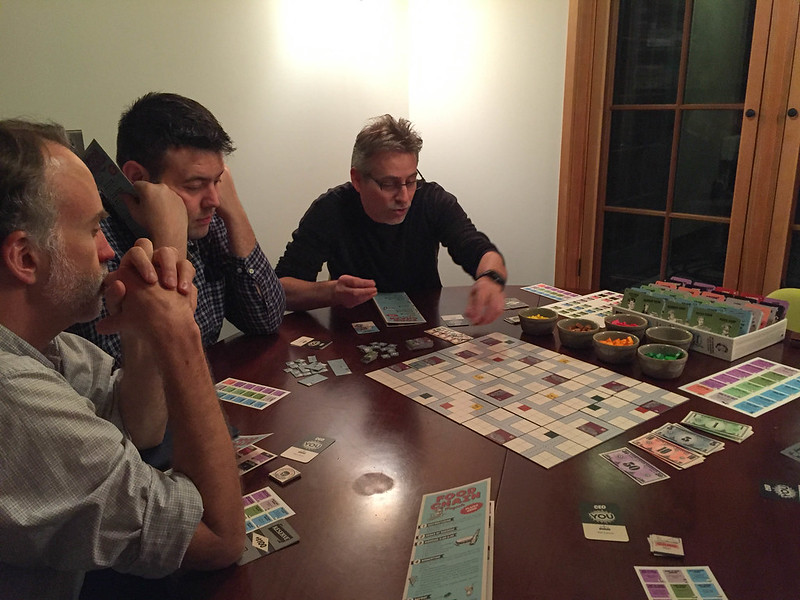 One awesome part about my regular gaming group is that there are always folks buying up the new games so I can sit back and try before buying. The latest Splotter game is Food Chain Magnate, a brilliant design both graphically and in game play. There’s a lot going on in this game: planning a few moves ahead, spatial tracking (how far is my restaurant from other houses and how do I set my prices), organizational design, just to name a few. I want to play this again. 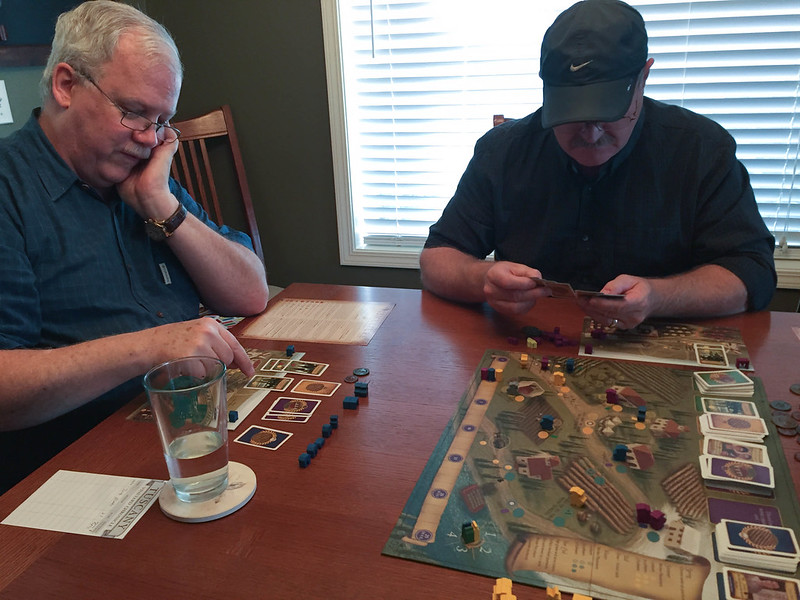 I picked up Viticulture and the Tuscany expansion about a year ago and really enjoy the game. In fact, I’m hoping this can become a two player game that Julie and I explore thoroughly. And when I say explore, I mean I want to play through every expansion of Tuscany!

Viticulture is a worker placement game where you send your worker dudes out each year to do wine-making activities, like planting grapes, harvesting them, turning them into wine, giving wine tours, selling wine, etc. It has a nice secret demand system over it that makes for a fun economic exercise, but it isn’t nearly as stressful as other worker placement games (I’m looking at you Agricola). 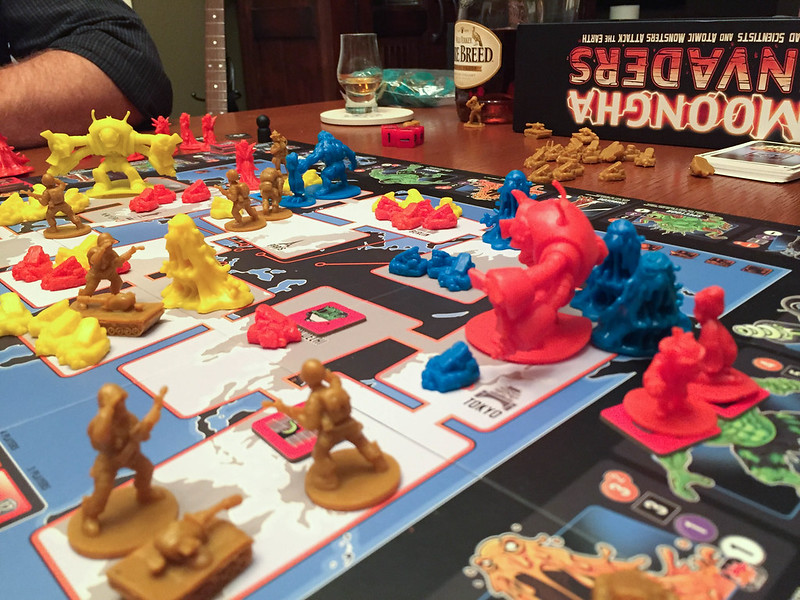 My latest Martin Wallace / Treefrog game showed up recently, and I was a bit ashamed to admit I hadn’t heard of it and didn’t expect it. Moongha Invaders is a monsters-conquer-earth game with a fun twist. Each player controls a set of monsters that they can spawn and send down to the planet, but each player also has three cities on earth that they want to preserve for their own nefarious reasons. So you are trouncing around the planet destroying cities, but also taking steps (as subtly as possible) to protect your own cities. Fun beer and pretzels game (or, in our case, whiskey).