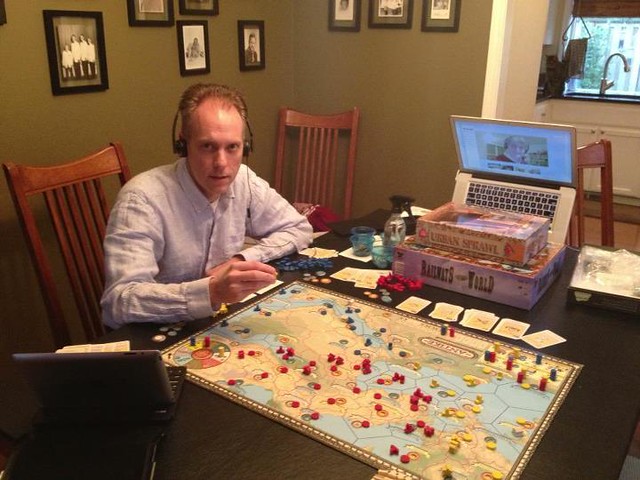 I've had some amazing boardgame sessions over the past two weeks that I'm eager to share. Earlier in December I hooked up with Yehuda (Jerusalem Israel) and Jim (Indianapolis IN USA) to play Antike over a Google+ hangout. I used my laptop to keep a camera on the game board and Julie's iPad to keep a camera on me. G+ likes to show the video from the loudest talker so I ran my audio through the laptop hoping to keep the game board as the primary video feed.

Antike is a good design for this sort of remote game where one player can keep track of the game state because it has no hidden information (like secret card hands or victory points). Jim and Yehuda both kept a game board locally so they could mostly stay in sync and I think it helped them along. This game had the least amount of conflict in it of any Antike game I've ever played, with Jim going after territorial expansion and Yehuda and I pursuing knowledge. Yehuda grabbed his second "7 seas" card plus the special prize for advancing on all the know-how tracks to win the game. It took us about 120-150 minutes to play the game. 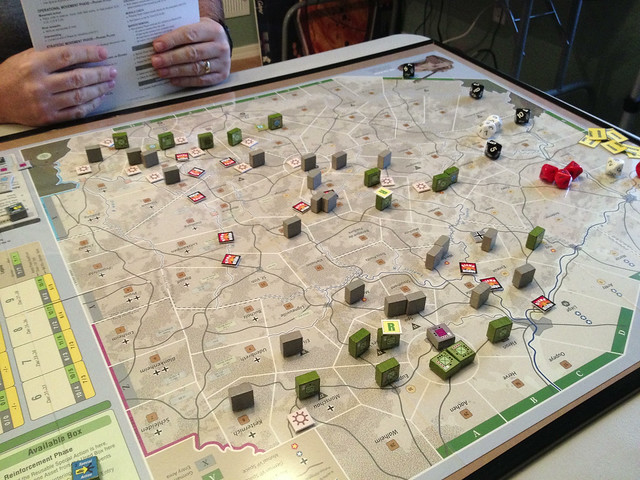 The following Sunday Mike came over for a full play of Fast Action Battles: The Bulge. We chose this game to commemorate the start of the Bulge on December 16. This was my second playing of the game, with the first coming about five years ago against the very same Mike out at Sunriver. This time I played the Americans -- plug the gaps and squeeze the bulge!

As you can see from the photo above Mike achieved quite the bulge and almost managed to take Liege. We had to cut the game short by about 2 turns and called it a draw, which I think may have been generous of Mike. 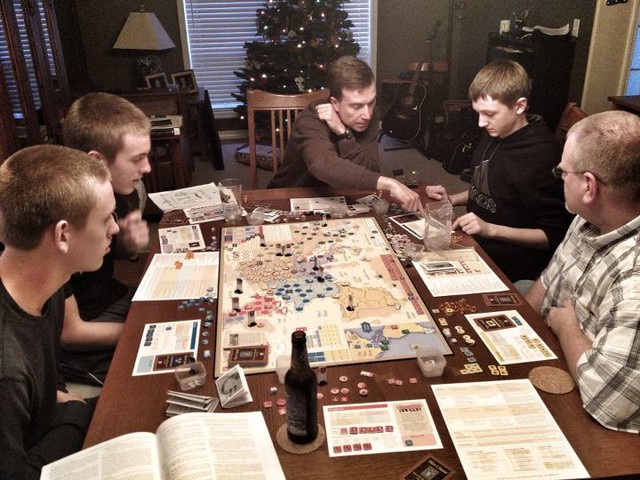 On Wednesday evening this week I hosted a six player game of Here I Stand: Wars of the Reformation 1517-1555. This is a card driven wargame with the Ottomans, Papacy, Protestants, English, French, and Hapsburgs all vying for supremacy during the start of the reformation. The game involves secret negotiations and each power has a unique path to victory. For example, the Ottomans score victory points through military conquest and piracy, while the English are focused on finding a male heir to continue to the Tudor line, military conquest, exploration and conquest of the New World, and (depending on who is the English ruler) supporting the reformation our counter-reformation.

Jacob, Matthew, and friend Connor (Matthew and Connor are currently in a European History class) joined us and I suspect they would all say it was one of the best gaming experiences they've ever had. Five of the six players were in contention for the victory, with the French (Jacob), English (me), and Protestants (Benoit) in a mad dash in the final turn. The challenge in a multi-player wargame is that everyone will jump on the leader as you approach victory. Connor (Ottomans) nearly achieved an automatic victory through conquest when Jacob and I raced across Europe to push the Turks out of central Europe. This in turn almost allowed Jacob to achieve an automatic victory when the Protestants stepped in with some "foul weather" to deny Jacob a siege assault that likely would have won the game.

This was nine hours of epic gaming that we are eager to repeat, either with a replay of "Here I Stand" or its sequel Virgin Queen.