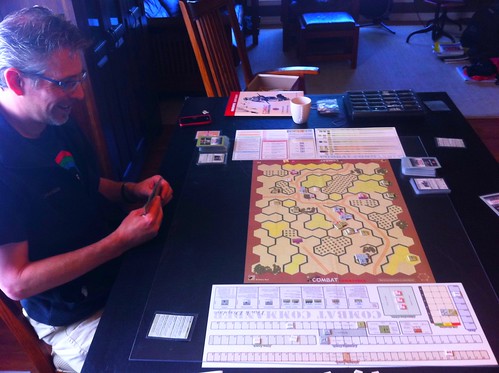 Matt and I sat down on Saturday morning to play the first scenario of the Normandy pathfinder campaign published in C3I for Combat Commander: Europe. I know most folks would recommend to just playing the Normandy battle pack, but those Paratroopers scenarios just sit there so lonely and unplayed!

I'll be playing the Germans for this campaign, Matt the Americans. We completed the first scenario, We Go!, which represents the airborne drop on St. Mere Eglise, France, on 6 June 1944. Great opening setup that has the Germans likely holed up in objective buildings in the center of town with all of the Americans dropping randomly throughout the map and possibly breaking if in LOS and range of a German unit. At least 3 or 4 of the American units broke during the drop, but with the Americans moving first and Matt having a Recover card in hand it turned out to be inconsequential as he rallied everyone.

While I laid down fire on squads and leaders stuck in open terrain, Matt moved quickly to close in on one of the key objectives and quickly uprooted my weapons team and MMG with an advance and melee. I continued to hold my own for a another turn or two when I made a critical mistake. Matt had a leader stuck on an adjacent hex to one of my held objectives. I waited for the opportune time to step out of the objective and take his leader in melee, thinking I had the right cards to opportunity fire on any other units that might try to sweep in from behind to take the building I just vacated.

I didn't anticipate that Matt would be able to lay down not just one but two smoke bombs to cover his advance, plus draw two 10 hindrance smoke counters from the cup. Objective lost, game effectively over as there was little to no chance for me to retake the building now that my leader and squad are sitting in the open outside the building. Clearly the Germans need to sit tight and play defense in this scenario. I just couldn't sit on my hands.

So, after scenario 1 Matt is up by 11 VPs. The next scenario is TBD as there are some options presented in the campaign.