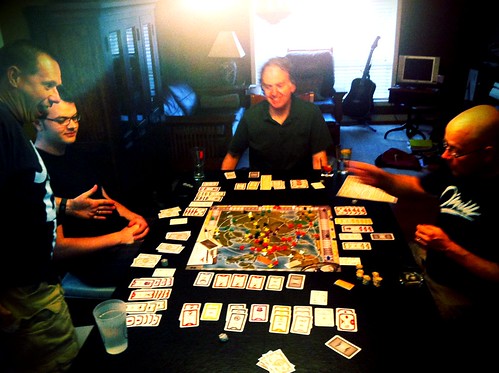 I hosted my game group weekly session this week and got to play Airlines:Europe with 5 players (Mike, JD, Greg, and Doug). This is a remake of the Alan Moon classic game Union Pacific, one of the better train games out there that scales well to five or six players. UP was an update to a very early Alan Moon game called Airlines. My friend Lorna did a nice comparison of the three games.

The game is streamlined from UP and we were able to play in well under 2 hours. I think I stumbled my way into a victory by virtue of playing the hand I was dealt with - no duplicate share cards. This encouraged me to diversify and while at the end of the game I only had the leadership in one company, I had accumulated 2nd and 3rd place points from most of the others throughout the game. I think JD and Doug were close 2nd/3rd place.

Fun game, nice components, but didn't feel like enough of an upgrade to me to consider replacing my copy of Union Pacific.