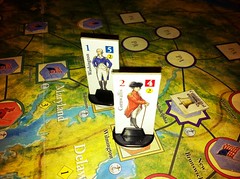 It wasn't planned, but we played it anyway. Jacob and I had a mostly free Sunday afternoon and opted to play Washington's War, giving me a trifecta of card-driven wargames in less than a week (Twilight Struggle, Napoleonic Wars, and Washington's War). While this is easily on the simple end of the spectrum, playing without any prep was possibly a mistake. I don't think we missed any rules, but the going was slower than Jacob would have liked at the start.

I played the Britts and relied on a steady stream of strong re-inforcements and political pressure while chasing a few of his weaker generals around. The cards were clearly in my favor as Jacob failed to gain any traction on drawing the French in or taking away my British Regulars combat advantage. Even with some poor luck he played extremely well, with the game ending in 1780 (about 6 turns) with both of us satisfying the winning conditions but the Britts winning by default.