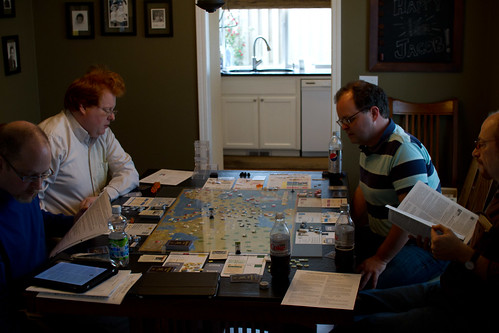 I hosted a five player Napoleonic Wars game today - my first time playing with a full complement of players. I drew the Russians which was also a first. Michael played the French, Tripp the Britts, Doug the Austrians, and Dave the (slow to develop) Prussians.

The first turn saw the French and Napoleon marching east towards Vienna. I dutifully marched Kutuzov and his army west to lend support, settling in Vienna and waiting for the inevitable breakthrough. Unfortunately for Michael the dice weren't cooperating and he took some brutal early attrition losses and my reserves were barely needed for the first year. This allowed me to develop my relationship with the Ottomans and bring the Turks over to my side as allies by the end of the first year. Prussia held tight and built troops will the Britts took over the seas and grabbed Rome. Turn 1 ended with me in the lead and hopeful for peace (and hence victory) but it was not to be. Prussia joined the coalition camp against the French at this time.

Turn 2 saw some interesting events happen. A card event meant that nobody would be able to break pact and join the French this year, and with the French struggling this meant the allies would jockey for the best position and hope for victory. We stalled out in central Europe - I grabbed a few keys but did not have the command ability to retain them (frankly, I was hoping France would get distracted elsewhere and leave me alone). Tripp grabbed the lead as the Britts via alliance and extra resources, and also played an event that would increase the likelihood of peace happening.

And that's how turn 2 ended - Doug and I sacrificed cards to prevent peace, Tripp sacrificed a card to make it happen, and the French and Prussians did nothing (the nerve!). Peace would happen on a roll of 5 or 6 and a 6 was rolled, ending the game and giving the victory to the Britts. Well done Tripp. We finished in about 4 hours.