Ken and I are trying to reserve Wednesday nights for two player wargaming (lighter stuff) and last night was our second try of Command and Colors:Napoleonics. We moved to the second scenario, Rolica - Second Position, with me again playing the French. 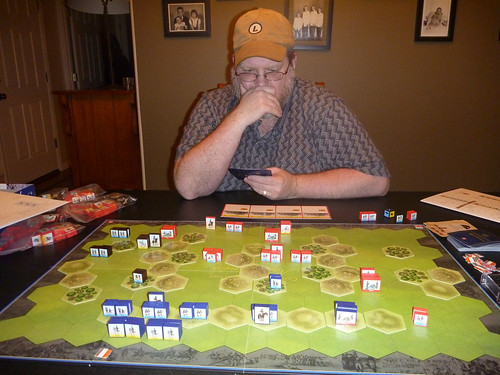 Ken opened with a quick strategic move on his left flank that put significant early pressure on my right. I had a strong repelling move from my hilltop position but Ken was persistent and gradually wiped out my right flank. Unfortunately I subsequently was holding onto 3 right flank cards which seriously hampered my options. It was still a great battle with Ken winning 5-2 and the game finishing in about 90 minutes.

We are getting the hang of the tweaks in this edition, namely the value of infantry squares and cavalry retirements. There are still some line of site rules that I think need clarifying and it is hard to keep straight (in our heads) the light vs line infantry differences. Still I think we both feel this is the best of the series so far.