I had some games to deliver to another PDX gamer and we agreed to meet at the Lucky Lab in SE Portland tonight. I planned to stay until about 8pm and we had tentatively planned to play the classic Amun Re, but on arrival he suggested Neue Heimat. This is a game I hadn't heard of, let alone played. Either I'm out of touch or this is a fairly obscure game. Possibly both. 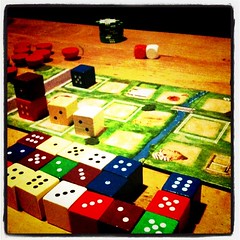 The game is mostly luck free with zero hidden information between players - the only variability is in the initial game condition and some building caps that can vary in value and are drawn from a random pool. Don't let this fool you into thinking this a game that involves much planning - it is very tactical and chaotic. There were five of us playing (I finished with three others at the bottom in a near tie for last) which added to the chaos but it was a fun ride.

You can find a decent description (and review) over at the geek.

This is a pure auction game with a fixed money supply where every action you take may end up gaining or losing points depending on the actions of other players. The two more seasoned players finished first and second by a wide margin which indicates there's some depth to the game that eludes me, but I'm not sure I would have the patience to explore it much further.