Ken and I resumed what will hopefully be weekly Wednesday wargaming sessions. We've been playing through the Stalingrad scenarios for Combat Commander and loving it. We played scenario 37 which has a weak Russian force trying to hold out against a superior German force in an urban combat setting. I played the Russians, Ken the Germans. 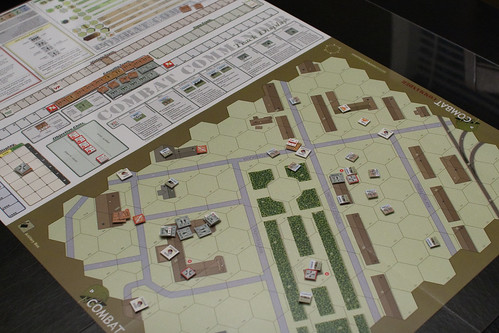 The default setup and victory conditions has the primary objective for Germans close to the front line - a dividing road near the German setup location. We drew additional objectives that made the two buildings near the rear line worth an extra 14 VPs, which is a huge strategic change in the scenario. Ken was sufficiently aggressive, running up my weaker left flank in an attempt to capture one of the bonus buildings. In short order he was also moving up my right front or the 12 point bonus and there wasn't much I could do with my garrison near their front lines.

Some early time triggers put the screws on Ken pretty hard but he stayed with his plan. He only managed to capture a single objective by the turn 6 trigger that brings in my reinforcements plus an extra squad/LMG for each objective I still hold (4 total). We both felt like this was probably game over for the Germans but Ken persisted and I made at least one tactical error by having my front garrison run for the sewers. I forgot about his hero that could dash across the map at will and this allowed him to capture the building. It then became a race of casualties vs. time, and as you can see from the photo below we were both up against our surrender limits. 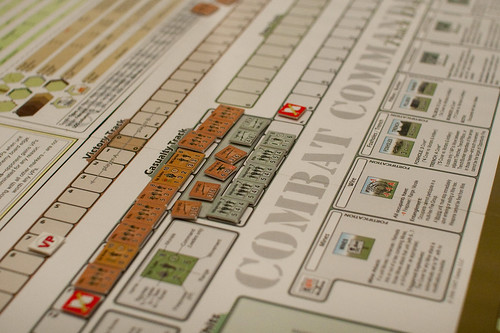 Unfortunately for Ken the sudden death time trigger came before he could eliminate another unit and the Russians were the victors.

This is a very well balanced scenario (considering a single play) with loads of tension and a classic attacker/defender posture. The time-based reinforcements force the Germans to act quickly which keeps the pace brisk.