I've Twittered a bit recently about the productivity coaching I've been giving to Matthew and a few folks asked me to expand on how I've introduced Getting Things Done (GTD) to the boys.

I introduced GTD to both boys when they were 12. Jacob and Matthew are involved in a wide range of activities, some that require leadership and project planning, and in both cases the introduction was in reaction to overload or missed commitments. In Jacob's case he dropped the ball on some scouting-related work he had committed to, while in Matthew's case he was forgetting chores, stalling work on longer-term school projects, and generally feeling under the gun.

The timing felt right for both boys because (1) they had the maturity to understand the value of a systematic approach to managing personal work and commitments, and (2) they were feeling stress and a bit of disappointment in their ability to stay on top of their work. Simply put, they had each stumbled and were open to fresh ideas to help manage their work.

My approach was very different with each boy. Jacob is a voracious reader and it only required a 30 minute intro to the basic concepts of GTD, followed by an assignment to read the first few chapters of David Allen's book. I also walked him through my personal workflow and shared some checklists and diagrams that I've used over the years.

While Matthew loves to read, in his case it was unreasonable to expect him to pick up the book and self-teach. Instead, I we sat down together on a Saturday morning for an hour and I walked him through the basics and coached him through a mind-sweep after he gathered all of his stray papers, inbox items, and work-in-progress for scouts and school. We also completed a few easy actions he had lingering so that he could get the quick satisfaction of crossing items off his list. Matthew joined me on a drive to/from Salem (about 50 minutes each way) and we listened to several episodes of the Merlin Mann / David Allen productivity podcast series. This worked well for him and he was talking the lingo in short order after hearing these (e.g., "it is just as easy to get back on the wagon as it is to fall off").

The Pragmatics - What System / Tools to Use?

I shared a few options with Jacob for managing his GTD life - some online tools, the PigPod PDA, and plain old 3x5 cards with a binder clip. He opted for low-tech 3x5 cards for starters and used this system for the first year. It worked well for him and he got into the habit of carrying the cards to scout planning meetings, school, and using them during his weekly review.

Sometime last year Jacob moved over to Remember the Milk and that's what he uses today. He keeps a laptop with him most of the time so this works reasonably well (the laptop died and he's getting an HP netbook later this week), but I'm a bit concerned about his off-line capture process. I think there's still room for paper in his workflow so we'll be discussing this soon. 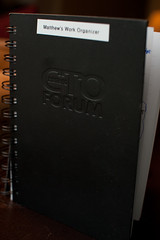 I knew simplicity would be in order for Matthew so I proposed a paper-based system for him. We settled on a small-ish spiral bound notebook. The structure is simple - he uses the front of the binder for actions, and works from the back with his list of projects. 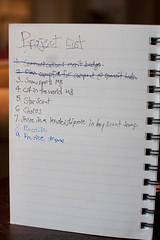 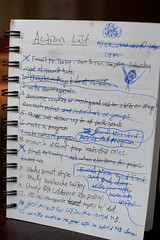 This gives him a one-stop shop for capture and weekly review. Contexts aren't that important for Matthew - nearly all of his work can/should be accomplished at home and I've shied away from focusing on that aspect of GTD with him. I encouraged him to use a review process similar to the Autofocus System. 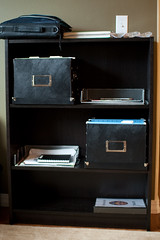 Julie and I also setup some basic workspace functionality for the boys. In our living room we put in a single Billy bookcase, an inexpensive hanging file folder from Staples, and a physical inbox for each boy.

Many GTD gurus will claim that the weekly review is the linchpin for success, and I agree. This is also the area where the boys need the most ongoing support and coaching. Jacob and Matthew both reserve Sunday afternoons for their review, and I have to put a reminder to myself to remind them to do their review.

My advice here is to not let your kids go on auto-pilot - like many parenting activities, persistence and pestering can pay dividends and help build strong habits. This also goes for the day-to-day reminders on GTD basics. I can often be overhead saying "did you capture that somewhere?" or "so what's the next action on that project?" to the boys. Sure, they get annoyed from time to time with my nagging, but I'm not sure you can call yourself a good parent if your kids don't achieve some level annoyance with you.