For the first time in many moons I hosted a game night on Tuesday night and had a strong turnout of six people. Steel Driver was the top priority for the night and it supports six we gave it a run. This is one of the latest Martin Wallace releases in the Treefrog Games line and was a surprise Essen release. You can get a more detailed write-up of this session from Mike. 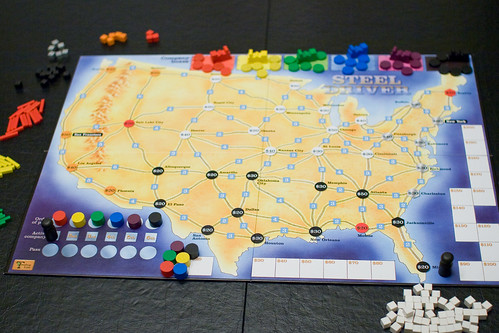 None of us really had a clue on the tradeoffs of various decisions, especially what impact the final cube delivery would have on scores. This was amplified by having six players which at times led to feelings of lack of control. There's a great game in here and I really look forward to playing it with 3-4 players. I suspect I'll play it a few times at BGG.CON. 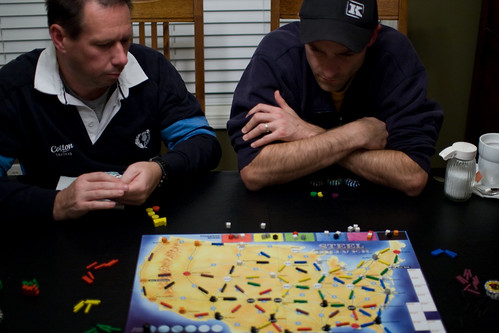 Dominion has been on my mind lately and I've played it four times in 5 days (all face-to-face - none of that BSW for me, thank you). We broke it out after Steel Driver finished on Tuesday and played two concurrent games. 4 of my 5 games have been with the suggested initial Kingdom card sets and lately I've been toying with a strategy focusing on mining copper-->silver-->gold and buying high victory point cards whenever possible. It didn't really work, possibly because I got a little sidetracked with Remodeling. JD wiped the floor with us using a Market strategy to chain actions and cards, running through much of his deck on each turn. 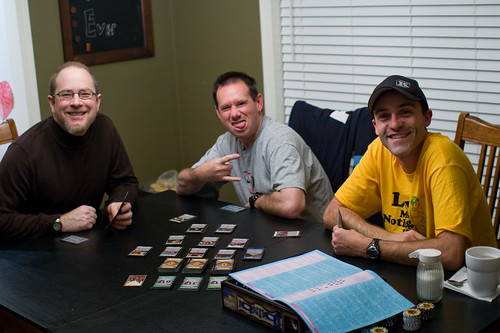 After Matthew's basketball practice tonight Jacob, Matthew and I played two more games. In the first Jacob and I did the mine strategy and it worked very well for him, miserably for me. Maybe it was just bad luck, but I think it needs refinement. 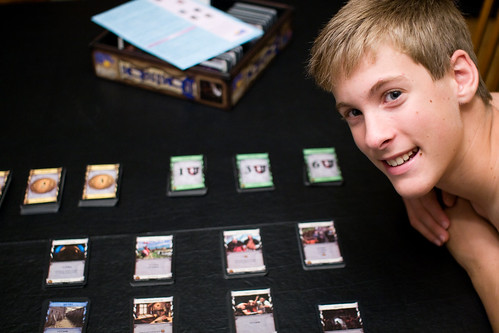 We then played our first game with the "Big Money" suggested card set and I did much better. I focused on the Moneylender to cycle coppers out of my deck and purchase silver/gold early on. I also picked up a couple of Chapels to allow me to dump the Moneylenders when their work was done. The result was hand draws about every other turn allowing me to buy many victory points. Yeah! 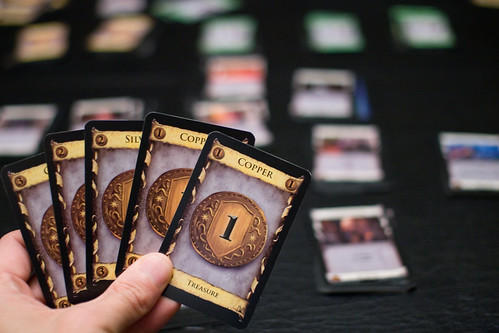 This is a great game and the boys seem more turned on by it than they were with Race for the Galaxy, which is saying a lot. We'll see if the thrill wears off after many more plays at BGG.CON and my upcoming gaming weekend at Salishan.