I took what I think was a deserved break from volunteer activities this weekend, allowing Julie to accompany the boys on a scout camp-out. I proceeded to fill my gaming dance card with Doug from 11am-2pm and Ken from 2pm-whenever. Doug and I scheduled a game of We the People in preparation for a planned play next week with Jim Ginn at BGG.CON (follow on Twitter). We the People is the original card-driven game and the ancestor of great games like Hannibal: Rome vs Carthaage, Twilight Struggle, Paths of Glory, and derivatives like Memoir '44 and Combat Commander.

Having read the rules I felt prepared to dive in and learn some strategies as the game progressed - I also knew that Doug would kindly guide me around foolish newbie mistakes (Doug's write-up of this session is already posted). 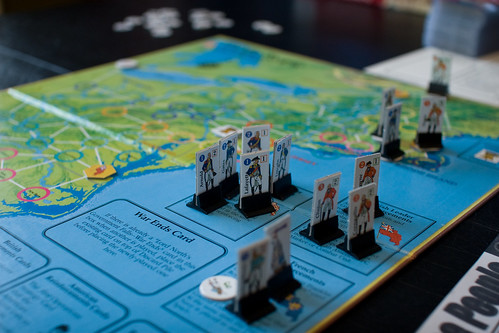 The game is very comfortable and friendly - it feels like a slimmer version of Hannibal and Twilight Struggle combined. It lacks the refinement of those games, particularly in the ways that bum hands can really set a player back, but is short enough to make it easy to overlook any weakness. 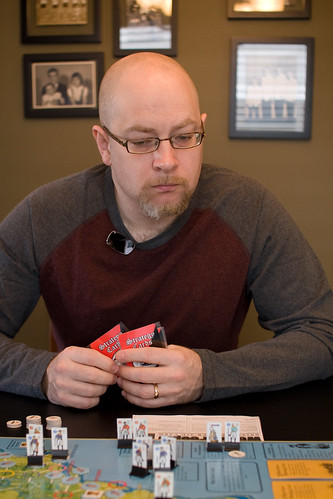 I hung in there but struggled with forecasting the impact of political counter isolation and got burned a few times. These point-to-point games often have many subtleties in the geometry of point connections that take some getting used to. 6 or 7 turns into the game I held a card that was almost certain to end the game and struggled to push things to a draw but just couldn't manage. Still it was fun and we finished in just under 3 hours and just in time for Ken's arrival (and Doug's departure).

Ken has never had the pleasure of playing Agricola so that was first up. We had a very typical first game where Ken slowly figured out the engine but struggled to keep up with me and grow his family early enough to have an impact. We played with the Intermediate cards right from the get-go. 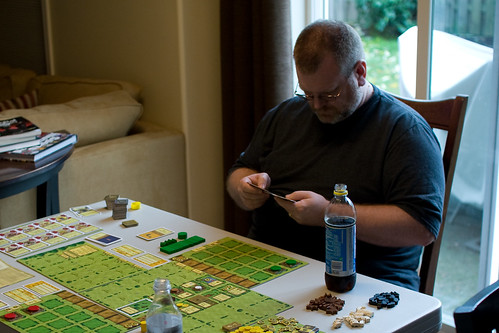 Our second game was a turnaround and Ken got some great production going early and I floundered with some poor occupation choices early in the game. He won this game 46-36 - a great score for a second game! 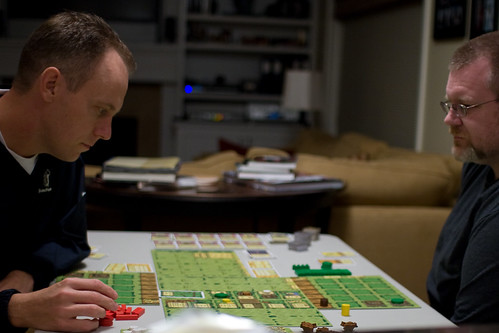 Ken and I wrapped up the evening with three games of Dominion. I knew this would resonate with Ken - we started our gaming together with Magic: the Gathering about 5 or 6 years ago. Like Agricola, Ken closed the victory gap quickly and we tied our third game with 36 points each. What made this evening especially enjoyable was the mix of cards we played with and I've now played with the entire mix of cards. I should get to play this some more tomorrow with KC & Rita.