This has been a pretty good year for me in terms of making gaming sessions. I've been able to host most of the time when I'm scheduled, and I've managed to make it to Mike's a few times on Tuesday nights. I was hoping to play an Ystari game (Ys or Yspahan), but it looked like a group wanted to learn and play Thurn and Taxis so I offered to teach. George, Carey, and George's friend & co-worker joined me.

I like this game but it took longer than it should. I was thinking too much and everyone was getting used to the rules and subtleties which dragged things out a bit. I think we played in 2 hours including teaching - this should be a one hour game. I have my own copy now thanks to the GameStorm math trade so I'll try and get the kids to play it (fast!). George won the game, picking up the nuances quickly which is not unsurprising. 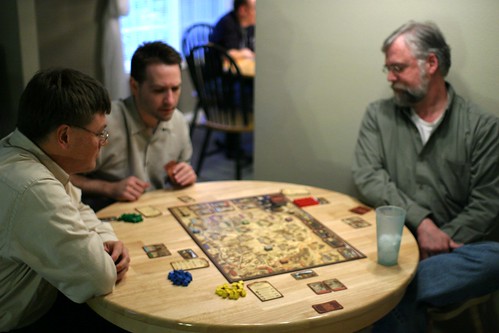 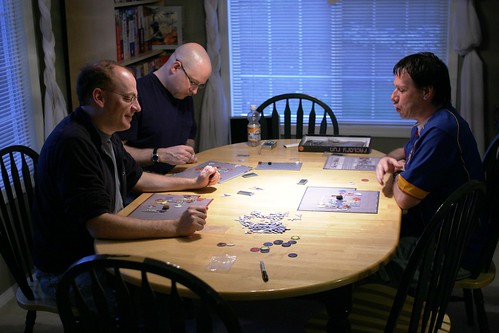 Dave wanted a party game and when Liebrary was offered I jumped all over it. There was some reluctance in the group, but I challenge everyone that played to claim that they didn't have fun. There were lots of laughs and groans and by the third card everyone was in the mood and making legitimate efforts (i.e., that's when we stopped seeing opening lines referring to Daryl Hannah in a derogatory way). George was exceptionally good at the game for a non-native English speaker and beat us all, though I was a close second. 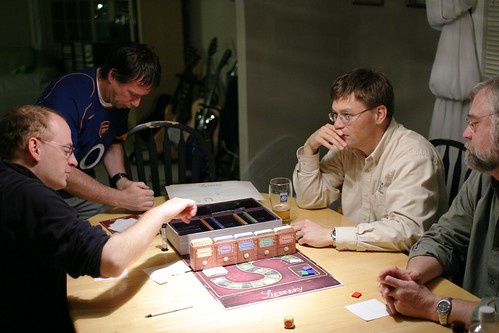 Thanks Mike for hosting.