The Monday after Thanksgiving weekend (Nov 27) I traveled to Israel for the second time this year on Corillian business. Scary thing is, I'm growing used to the routine. 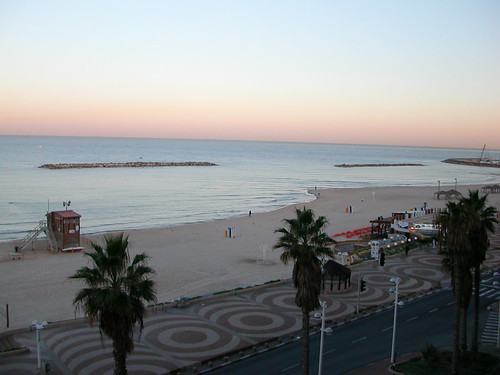 This trip involved a staggered schedule with me and my comprades at Corillian to account for different meetings and a firm desire by me not to travel on Thanksgiving weekend. I arrived Tuesday afternoon and after a long taxi ride due to traffic checked into my room at the Dan Tel Aviv on the Med coast. The next two days involved a series of business and technical discussions with an Israeli Bank - always exhausting but rewarding at the same time. 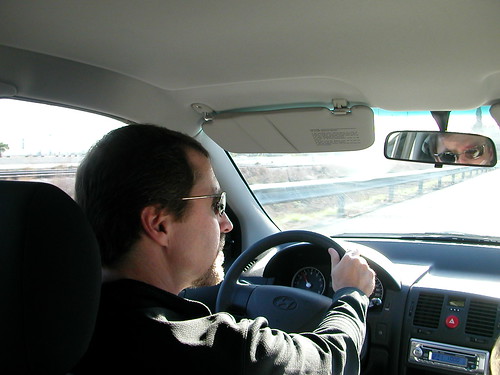 On Friday Debra, Scott, and I rented a car and drove to Jerusalem to meet our pre-arranged guide (thanks to Yehuda) at the Jaffa Gate of the old city. It took longer than we expected - though the distances are short, traffic and navigation can be a challenging. After a few passes by the parking lot (we almost circled the old city) we parked in the garage and walked up to our guide. Yehuda came along for the tour as well - nice to have the company of another local. 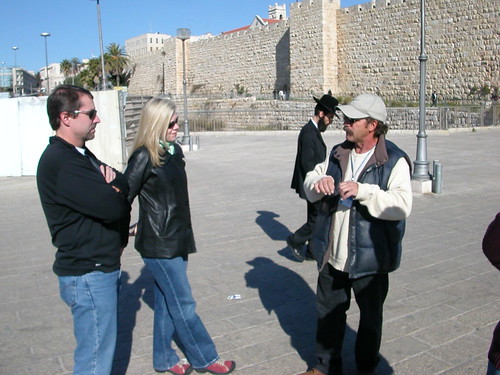 The guide was fantastic, and like many of the locals we've met in Jerusalem, he is from North America originally (Baltimore in this case). He has been doing this for 15-20 years and is deep on the history and topology of Jerusalem. I say topology because he continually referred to the peaks and valleys of the area and how it has affected the development of the city over the years. A common phrase: "this place is venerated as the...", followed by a pragmatic (skeptical) accounting of how it is unlikely to the actual place where [the last supper was held, Jesus was crucified, Jesus was entombed, etc.]. His commentary was not biased by any religious perspective (in my view) but certainly colored by his understanding of the history of the area. 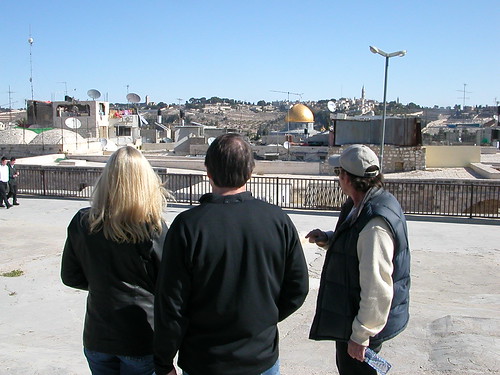 Our time spent was primarily in the Christian and Jewish quarters - once again our timing was bad to enter the Muslim quarter so I must coordinate and plan better next time. We did get a chance to peer into the quarter through a security checkpoint and snap some photos. 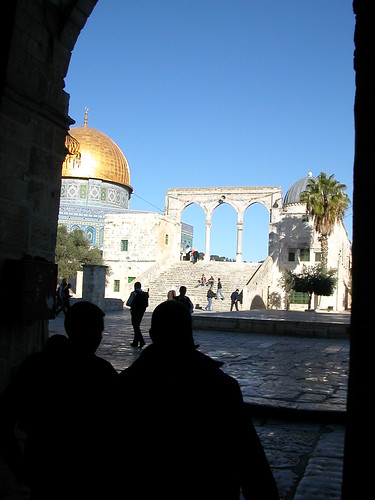 In the mid afternoon we had a bit of logistical coordination to work through - get our car out of the parking garage (closes at 3pm), and get Yehuda back home before the start of Shabbat (about 5:30pm-ish). We decided to take a cab from the Zion gate and were greated with the all-too-familiar flat rate proposal from a cabbie (30 NIS for a 2 minute ride??) who happened to be Arab - apparently he took both of us for tourists based on our western looks. I may be a tourist but I've been there enough to ask him to turn on the meter instead and he refused. As we walked away his parting words to me were "he is a Jew, you are a Christian - what are you doing together??" 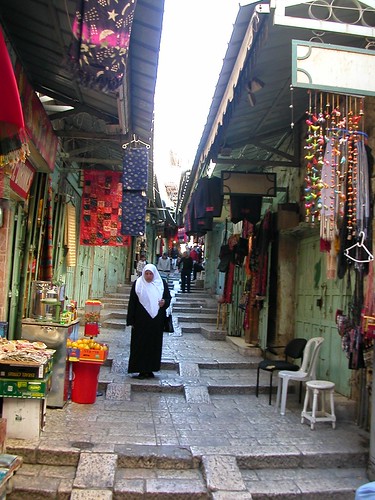 We found another cab, got back to the car and I dropped Yehuda off at home. I returned back to the Zion gate and parked there - the lots were emptying as the religious Jews worked there way back home to start Shabbat. I met back up with the group and we expored some other areas and enjoyed the sunset. One of the areas was a building that may have housed the upper room that held the last supper, was a mosque for a while, and is now a synagogue. From the top of that building we enjoyed a beautiful sunset and shortly thereafter bid farewell to our guide. In case you wondered, a full day tour like that (about 7 hours) costs about $150 - $200. 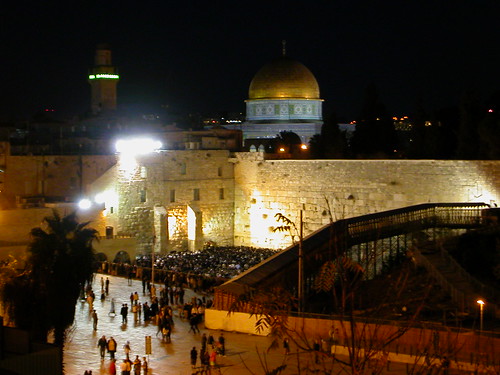 We were eager to go visit the Western Wall (aka wailing wall) at the start of Shabbat. As we walked down the winding streets of the old city, a pretty young (and pregnant) Jewish mother came running down an alley and asked me if I was Jewish in a frantic voice. I told her no, and she asked me if I could come turn her oven off - she had mistakenly left it on past the start of Shabbat. I complied and we followed her to her home where a nice spread was set out for Shabbat dinner and took care of the oven for her. I figured I could probably get a nice dinner out of the deal if I asked nicely, but perhaps that would be pushing her hospitality. 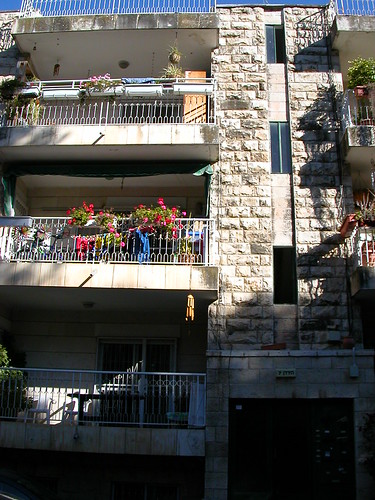 Scott and Debra then dropped my off at Yehuda's home and began their drive back to Tel Aviv to get some sleep before their early flights the next morning. I enjoyed a very nice extended family and friends dinner hosted by Yehuda and his wife Rachel. I've always felt very comfortable in settings like that (I've attended many Jewish meals during high holidays) but at times I feel that I make them uncomfortable - or maybe they are all just very shy! I'm fine talking away and telling stories, and I always enjoy the story telling and dialog initiated by Rachel (she went to Reed College right here in Portland, by the way).

After dinner we sat down for some gaming. I avoided another spanking at Puerto Rico by teaching Yehuda and his son how to play our new game 24/7. I think it was received pretty well. We also played Yehuda's Menorah game - VERY enjoyable with three and I'm glad I got a copy to take home with me. We ended the evening of gaming with a learning game of Tichu.

Now most groups will sit attentively as I teach Tichu (I'm no expert myself - I still have to refer back to the rules to play and teach it), but this group... I'm not even halfway through the rules and scoring when they learned about how cards are passed. Yehuda and crew proceed to digress into an in-depth discussion of the merits of different passing strategies and signals, e.g., I'll always pass odd, you always pass even, if I pass a dragon, that means my hand is weak, etc. And they haven't even played a hand yet! I scold them, saying that they shouldn't even consider such strategies until they are much more familiar with the game but I think deep in my heart I was flustered as I realized that they probably already grasp more of the subtleties of the game than I have after 10 plays or so.

Saturday morning found me searching for something to do - not for lack of options, but for lack of decisiveness. I had a quick coffee with Yehuda then saw him off to Saturday morning services, grabbed my camera, then walked out the door. I was thinking I would walk to the promenade overlooking the old city, but was also considering a trip to Bethlehem. Yehuda and I discussed that option in the morning and he advised me that it should be safe for me. So when a taxi came my way as I strolled towards the promenade, I hailed it and asked for a ride to Bethlehem.

Clearly the cabbie was surprised, and he indicated that he would have to drive me around the security wall as he was unable to go through the checkpoint. I shrugged my shoulders and said "OK, let's go". 20 minutes later I found myself outside the nativity church in Bethlehem - one of only about 10 or so westerners (that I saw) visiting the area that day.

The church was interesting but I didn't find it that moving. The main cathedral is fairly smoked out and has apparently been the holding place for Palestenian millitants at least once over the past 2-3 years. Underneath the main alter is the nativity alter where it is venerated that Jesus was born - this is the manger grotto. Of course it is divided into at least two sections - one the Orthodox Christians own, and another the Catholics own. I couldn't figure out where the Methodists are supposed to go. 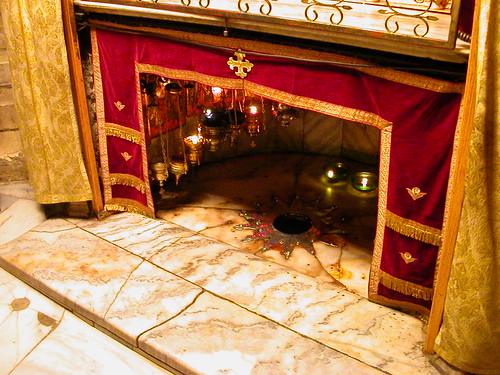 I then wondered around the wonderful Arab / Palestinian market near the church for the next hour or so, taking in the sites and smells, sipping some coffee, and eating shawarma. My flight to Frankfurt was due to depart at about 4pm, so around 11:30am or so I needed to work my way back to Jerusalem. I walked down the hill from the church area to one of the main strips leading into Bethlehem, hoping to find a taxi. I found one but he could only take me to the checkpoint. 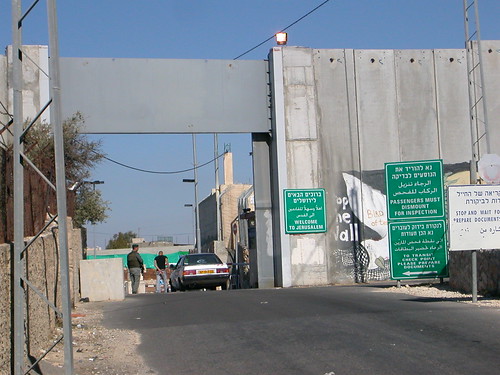 Unfortunately this checkpoint was only for vehicles - the guard repeatedly waved his M-16 at me, telling me to go around to the pedestrian checkpoint. It was an obvious where that place was as it could have been, but a friendly local offered a short drive to the checkpoint. I knew I would owe him something upon my arrival (it was about a 90 second drive) and it turned out the fee would be the purchase of a few necklaces which I gladly performed. 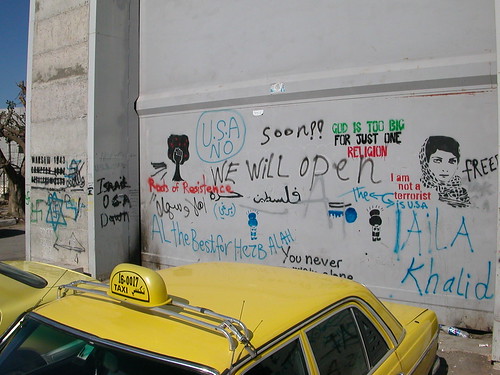 The trip through the checkpoint was interesting - two different metal detectors and I had to show my papers. When you hear about the challenges of access and travel between the different parts of the Palestinian Authority (PA), this is likely one of the concerns. 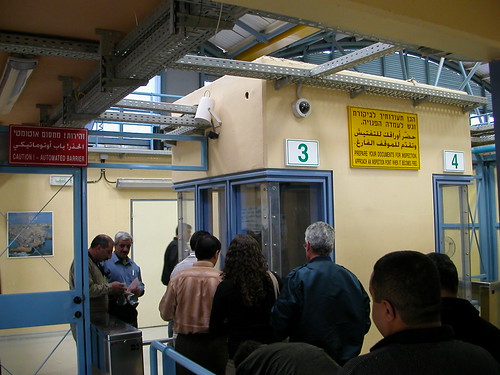 I won't get into the politics of the whole situation there. I do encourage you to read the Good Neighbors blog, of which Yehuda is a contributor. Clearly the story of Israel and Palestine is still being written.