I'm late writing this up, but we had a great time out at the coast last weekend. The weather improved on Friday allowing us to spend some time playing football on the beach, and we used the storm time to make a serious dent in my unplayed games list. I added some ceremony to the process by moving games from the right side of the stove to the left as they got played. I brought out over 20 game candidates and we played 14. 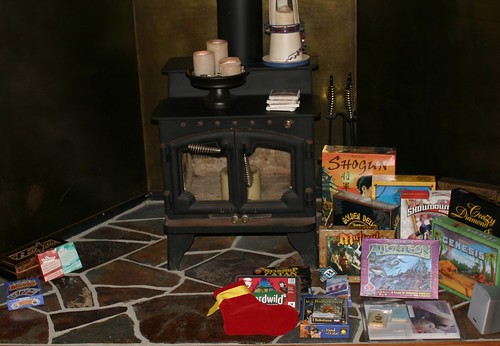 We started things off on Thursday night with a game of Trendsetters, a new card game release from On the Spot Games. This is a group-think party game where you draw a card which has a poll question for the group. You are trying to guess what everyone else will guess, and you score points if you are in the majority. Oddly enough the game says it is for 3-6 players but it only comes with 4 voting wheels. I also don't know what happens if there is a tie. Consensus was "meh" in the family, though Matthew seemed to like it more than the rest of us.

Next up was Mille Bornes, the classic card game of driving French highways. This was a gift for me about 2 years ago and I was hoping for something more. This is really just a take-that game where you hope to draw the right cards and are likely to spend several turns drawing exactly the wrong cards to help your situatin.

First thing Friday morning Jacob and I opened up the wooden box game Astoria to play the Alchemy game (the one that isn't the Epic game). Players will immediately be impressed by the (gratuitous) glass bottles and beautiful plastic gems, though I wish the green gems actually looked green instead of clear. The game play involves placing and moving gems on a game board with six different locations around a circle, trying to achieve certain recipe combinations (goals) drawn byt the player (oddly similar to the lighter cardgame Experiment). There are some nice twists in the game, such as trying to get majorities in certain kinds of spells to gain advantages. There are tough choices to be made on your turn - do you try to set yourself up for that spell you need, or do you disrupt the opponents plan? There are also reactions that happen when 2 gems come together with the same color. 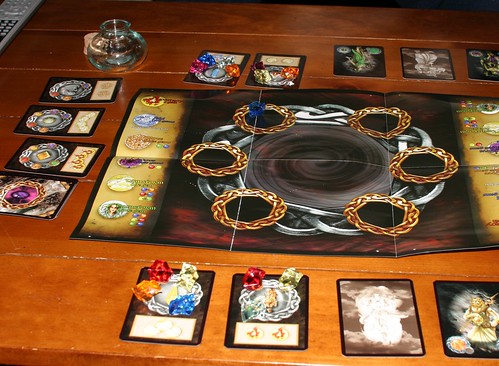 We haven't tried the Epic game yet, but this initial game was enjoyable enough that I don't regret the 20 euro spend this year at Essen.

Next up was the On the Spot Games new cardgame Zero In, a trivia game on a card deck game with a nice twist. Each card has a letter (or in the case of XYZ, three letters) on the back, with a choice of 4 different characters. Each character has 5 hints, with one player successively giving the hints until someone guesses correctly. Players get only one chance to guess, and you score more points by guessing correctly with fewer clues. Fun game but I worry about replayability - there aren't that many cards in the box.

Jacob and I wanted to play at least one war game over the weekend in remembrance of Veterans Day, so we played Axis & Allies: Pacific for the first time. The game took about 4 hours to play and was easy to learn given our experience with other A&A games. 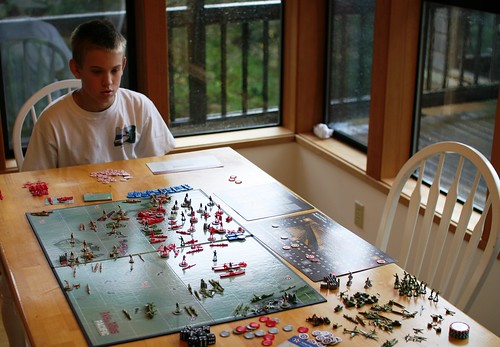 The game is fun but a bit tedious. Jacob eventually conceded (I was starting to bomb Tokyo on a repeated basis) after a well-fought battle. This one doesn't stand up well against other light wargames today (C&C Ancients, Memoir '44, etc.) but I suppose there aren't good alternatives that have a theater-wide scale like this. Sounds like an opportunity to me.

On Saturday morning the rain started in earnest again and it was time for more gaming. First up was the new Face2Face games release of the Knizia game Genesis. I had low expectations of this game given first impressions I heard from fellow Essen attendees and other buzz. 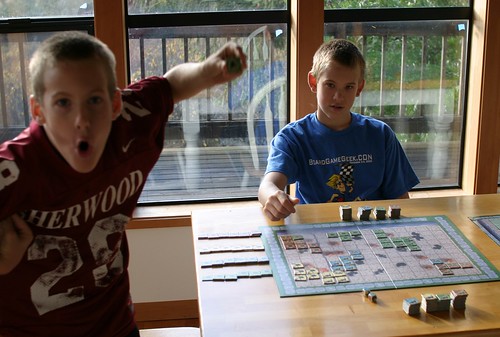 The game is exceedingly simple to learn - you roll two dice and play corresponding tiles to vacant spaces on the board, and you can't play on the volcano or tarpit tiles. If you don't like the dice roll, you can always play a single tile of any terrain type (instead of the two you rolled). The goal in the game is to have majority herds (orthogonally connected tiles of your species) in terrain groups - each player plays a different kind of species (dinosaurs, cavemen, lizards, and tigers). There are bonuses offered if you score in the largest terrain group on the board as well as the largest group of each of the four different terrain types. 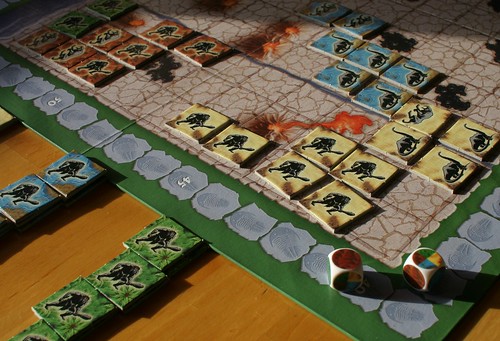 The game played in 40 minutes and I pulled out the victory with 30 points (Matthew had 25, Jacob 23). In the words of Matthew: "My Kind of Game". He and I rate it an 8, Jacob a 7. If you discounted this game based on Essen anti-hype, you owe to yourself to give it a try.

The boys and I then tried the Fantasy Flight game Mutiny!. Quite nice - you place bids on crew members to influence them and get rewards with the ultimate goal of getting enough sabres to conduct the mutiny. Jacob took control of the gunner early on and walked away with an easy victory. We all rate it a 6.

I picked up the children's card game Wie Hund und Katz while in Frankfurt a year ago (on clearance) and finally managed to get it out with the four of us. This is a cute little card game with a decent amount of chaos but we all had fun playing it. 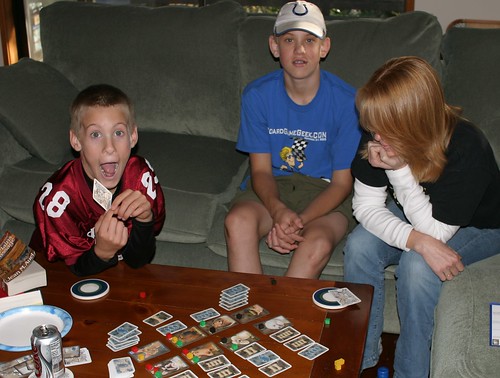 Another highlight was the Fantasy Flight game Atlanteon, a quickly played 2-player abstract. Very classic Knizia design where each player starts with the same resources and must strategize on when and where to use each tile. Jacob won and we both rated it an 8.

The last game played over the weekend was Ys, a game I picked up down at the Funagain warehouse last summer. While I generally don't like blind biding games, I can tolerate games where each player is sequentially making bids (some secret) in different areas of the board (I also like Aladdin's Dragons). The game clicked for everyone pretty quickly and it was a well fought game where I came out slightly ahead. I'm really glad I picked this one up and would like to try it at work sometime soon. 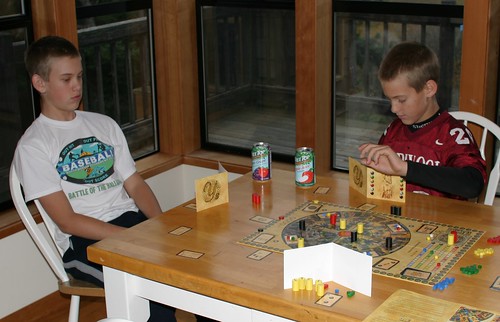 On another burndown note, I managed to trade away another 7 unplayed games and pick up only 2 that I hadn't played. The goal is in sight and can be realistically achieved - I think I'm under 20 games to go for the year now.