I broke down and purchased the newest Ragnar Brothers game Canal Mania after reading the Counter review and seeing some positive buzz online. Seeing that folks were comparing it to games like Volldampf and Ticket to Ride really piqued my interest so I took a chance.

The components are very high quality and I suspect better than any game Ragnar has done to date. The board is thick with a linen finish and I found it fairly usable. The main complaint is that it is hard to read the city names when you have barges and goods cubes on them. Set in the late 18th / early 19th century, the game is about the frenzy of canal building that happened in England before trains took over. But at its heart this really is "just another train game". 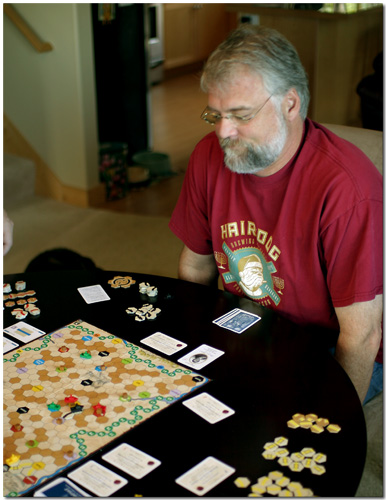 Each player randomly assumes the role of one of five different engineers that grant special abilities - these roles will change (view them as consultants working for your business and expect them to be hired away by the competition). The basic idea of the game is to build canals between cities according to contracts granted by parliament (e.g., build a canal from Leeds to Liverpool). Points are scored for using special kinds of canal tiles (locks, aqueducts, and tunnels) but not for the basic "stretch" tiles that are plain jane canals. The catch is that you can never place two of the same kind of tile in a row along a canal.

You build canals by playing cards from your hand that can be drafted during your turn. Similar to Ticket to Ride, the general idea is that you can draft cards or build canals but not both on a given turn. So... the basic way to score points is to pick up contracts (you must always be working on at least one contract, but you can hold no more than two)and build canals to finish the contracts. Contracts don't score points directly, but there's a nice bonus at the end (depends on the number of players) for completing the most.

The other way you can score points is by transporting goods. At the end of your turn you can transport a good between two towns. The last link followed by the good must be one of your own, but it can pass through others' towns along the way. The restriction is that a good can only go through each color once, including the start and end town (I believe there are six different colors). 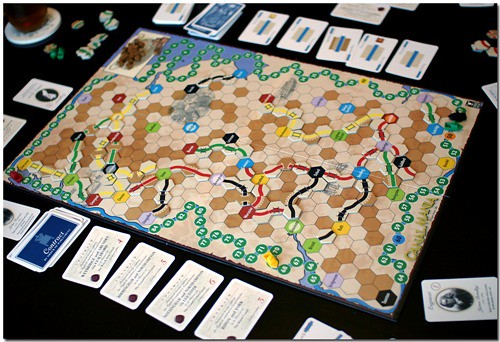 Instead of doing an action in a phase, you can always choose to draw a card from the top of the face-down build deck. So if there are no goods to transport, you can always take a free card.

I played with KC, Rita, and Carey, and KC stomped us. He mostly raced ahead through shipping goods, taking advantage of the replenishment rules that keep bringing goods back to towns that are connected to canals. I didn't really think that through and left some goods around in my towns, wanting to wait until the routes got juicier and would score more points. I didn't take into consideration that it would be fairly easy to get goods back (goods replenishment is triggered by picking up build cards with a goods symbol on them) into those towns, so I probably wasted 3-4 turns about about 6-12 points being cautious.

I'm pleased with the game overall and think the team did a good job with development - it is fairly streamlined and easy to play once you get past a few of the special rules. I would put it in between Age of Steam and Ticket to Ride in complexity, and probably closer to the Ticket to Ride side of the spectrum.