I made significant progress on the burndown list over the past week - a combination of Goodwill donations, eBay sales, and focused gameplay has created a net swing of about 15 games.

Jacob and I broke out my copy of Advanced Squad Leader (ASL) Starter Kit #1 today. This is a second-chance for ASL and me, as my last attempt 3.5 years ago was less than satisfactory. A lot has changed in those years, both in my personal gaming experience and in the ASL scene. I'm fairly certain the Starter Kit wasn't out at that time and in hindsight I don't think the group we played with was really prepared to teach newbies like Ken and me.

We played the 1st scenario - Retaking Vierville (here's a nice strategy discussion), using a combination of the rules, experimentation, and help from BGG and Saverese.org. It was slow going at first, and I know for a fact we got several rules wrong: 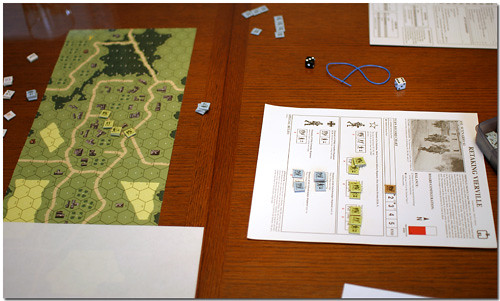 All this confusion without even using machine guns, vehicles, or two-story buildings! It was quite enjoyable though - we we through with setup and initial rules explanation in about an hour, and the game took about 90-120 minutes. Jacob played the Germans and got way too aggressive and close to my crack Americans, paying the price repeatedly. It didn't hurt that I rolled consecutive snake-eyes on point-black attacks on two separate stacks. I won easily but we both walked away craving more, studying the next scenario, and excited to move on. 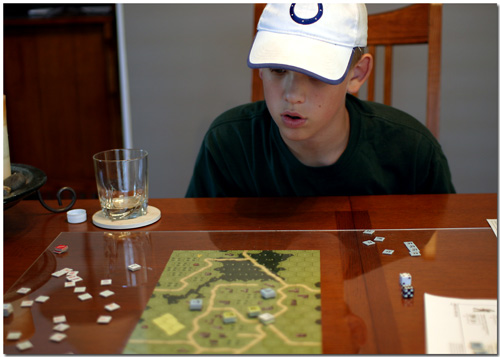 Now THAT feeling took me back to my days with the original Squad Leader - the combined anticipation of new rules, new stuff to play with, and a new historical scenario. MMP was very wise with ASL SK #1 - they achieved their goal, which I assume is to ensnare new victims into the ASL hobby without overwhelming them with rules. Boy, they could do without the acronyms though. I need to check LOS before I make a DR during my PFPh with my MMC, but first I'll check the TEM of his HS that barely survived a NMC during last DFPh.