Jacob, Matthew, and I broke out Warrior Knights for the first time Saturday night and Sunday morning. I set the game up in between football jamborees for the boys, and spent the pre-game in Oregon City reading the rules in the football stands. This is another quality game from Fantasy Flight - nice bits and cards, great map board, and well written rules.

Teaching this was much more enjoyable than Battlestations the night before (which almost had Matthew in tears). Jacob, like me, loves variable / random action systems like the one in Warrior Knights. It creates an economy of choices and keeps the game flowing smoothly with essentially no downtime. 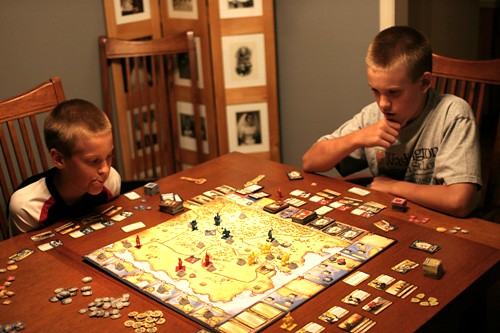 This game took us about 4 hours total, including teaching and some downtime looking up rules. We played by the book, with 10 influence points per player in the pool. The speed of the game took us by surprise, and we were all shocked to learn that just as we were starting to fight each other, the game was going to end the next turn. Matthew unwittingly did a great job arcing his play, grabbing 5 cities on the second to last turn. Unfortunately, he lost his only 2 un-manned cities to revolt or he would have one easily. I squeaked by only because of the special agenda card allowing me to buy an influence for five gold.

Even though Jacob finished last, he absolutely loved the game and is excited to try it again. It looks like the consensus is to put 15 influence points per player into the pool to give the game a better arc. We'll try that next time.