I failed to mention in my final Origins post that I participated in an ad-hoc tournament on Friday. This wasn't a typical tournament for me - I got roped into a foam sword combat tournament with 7 other players sponsored by Edhellen Armoury. We played through an elimination bracket and I somehow managed to win.

Jacob and Matthew have coveted those foam swords ever since they first saw that at GenCon a few years ago. Given that they won't make it to GenCon, Essen, or Origins this year, I wanted to bring back a special gift for them. So of course after winning the tournament and getting a taste of play combat, I had to pick up a sword and shield for each of the boys.

These games are played by a strict set of rules - the Belegarth Book of War. The emphasis is on safety and honor, offering some nice boundaries and lessons for the boys. For example, you are required to call hits on yourself and aren't supposed to call hits on your opponent (i.e., no "hey, I hit your arm!"). I like honor systems like this and the spirit of competition it fosters. 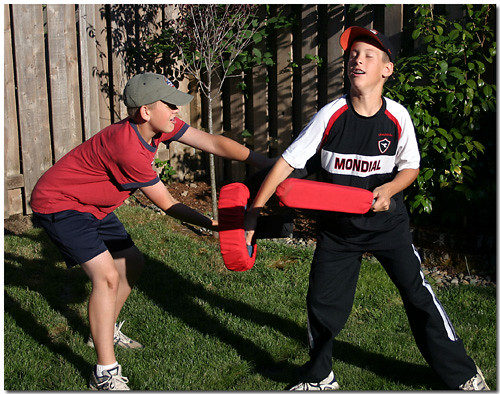 The boys have had some fun dueling in our back yard, and even Julie has joined the action. I was most surprised by how aerobic the activity was - after the tournament at Origins I was completely spent.