On Saturday morning, Julie, Matthew, and I left home at about 5am to drive to Camp Pioneer to get Jacob at summer camp (more on that in a future post). We made it home by about 11:30am and after cleaning up and some rest and relaxation, I talked the boys into playing Hacienda with me.

Unlike some other new games that I've played recently (most notably Thurn & Taxis), I had no clue going into the game what was going to lead to a good score and thus had a hard time formulating any sort of reasonable strategy. It comes down to the economics are various choices on your turn. How important is income? How much should I focus on blocking other players from markets? Is harvesting a worthwhile action? 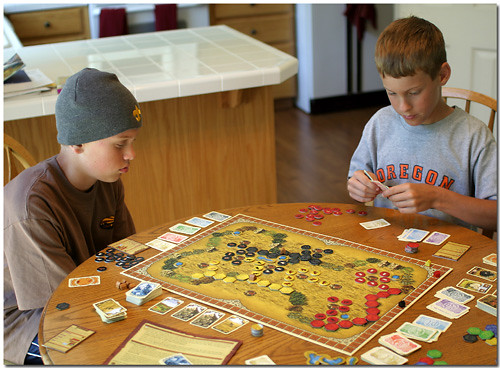 I figured that connecting to many markets would be a good thing. Jacob and Matthew both had the lead over me at the mid-way point in the game, but I felt good about my position as I expected to be able to connect to 6-8 markets. One mistake I made was laying down a water tile to block Jacob that in the end just gave him more victory points. I over-valued income… if the block had prevented him from reaching a market, then it may have been worthwhile. As it was, I just prevented him from getting some additional herd income. 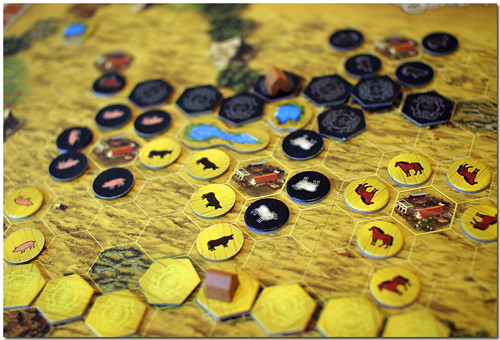 Jacob forced the game to end 1 turn before Matthew and I wanted (good play on his part), preventing me from reaching my 7th market and giving him the victory. I beat Matthew by one point.

Everyone enjoyed the game and the wide range of choices offered. The rules and strategy are not trivial in this game - I would put it on the heavier scale for euro games. We look forward to playing it again soon.