Day 3 meant final day for me as I needed to scoot back to Oregon to get ready for Boy Scout summer camp with Jacob - I'm going to join him for 4 days out at Camp Pioneer in central Oregon.

I spent most of Friday on the exhibit hall floor, taking some time to play some games with vendors and just chat with other publishers. My first stop was at the Hidden City Games booth to try out a game launched at GenCon last year - Clout Fantasy. Now this game doesn't get the best reviews on the 'geek, and I was skeptical enough about the game to pass on a try last summer.

Something was nagging me though - perhaps the thought that this might be something the boys would like - so I stopped by to get a demo. The instructor-lady was very knowledgeable and helpful and did a fine job explaining the game. Four of us gave it a try with mini sampler stacks of chips. 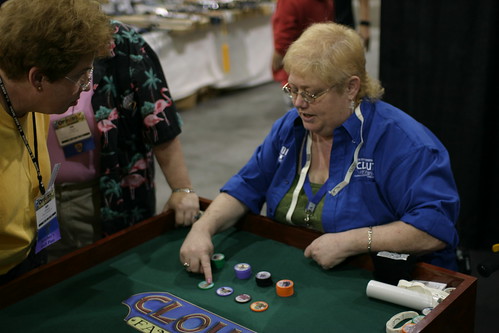 The idea of the game is that you want to finish with the most victory points on the table when all the chips have been tossed. Each chip is part of a faction (elves, goblins, centaurs, undead, and merfolk) and has special abilities that can help it knock out other chips or help your own chips. This is a combination dexterity and tactical game that certainly requires some thought and manual skill. I played the goblin stack and did well enough to win my match. I must admit I had fun - fun enough to pick up a starter and a few boosters. Hidden City Games also gave away starters in the give-away bags for Origins, so I was able to snag two more. I think the game might be struggling in retail, which gives way to concerns about viability of the product going forward. If you like dexterity games this one is worth a try.

Next up was a visit to the Rio Grande Games booth to try out their new release Thurn & Taxis. I had the luck of playing with Randy Schmucker (gamed with him last year at GenCon), Randy's wife, and John Butitta (regular Counter columnist), and being taught by Jay Tummelson himself.

This is a very attractive game, with the setting Germany and the theme delivering the mail. Think Ticket to Ride with mail carriages instead of trains. Comparisons aside, this game was fun and I will seriously consider purchasing it. There seems to be less conflict and stress in the game than Ticket to Ride, though there is some competition to grab the scoring markers before someone else takes them. If you want to learn more about the game, why not check out Scott's detailed video? 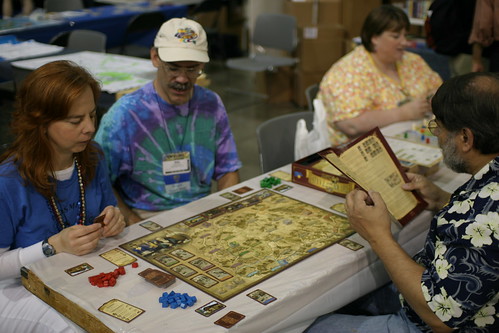 I somewhat unwittingly fell into a strategy of "grab some points and end the game quickly", taking the carriage master 3 times to work my way up the carriage progression and force the game to end. I never built a route more than 5 segments long, and only managed to grab 3 regional scoring markers. Still, I finished with the most points and had fun getting there.

After some lunch and a conference call for work, I went back upstairs to the CABS Board Room to try and squeeze in a game and say goodbye to folks before leaving for the airport. I worked in a game of Can't Stop (I couldn't and lost) but the highlight was watching Glen Drover teach Age of Empires III. I really wanted to get in on this game but alas I had but an hour before leaving for the airport. I heard enough about the game to think that I'll like it - a very euro feel to it, more so than even Age of Mythology. 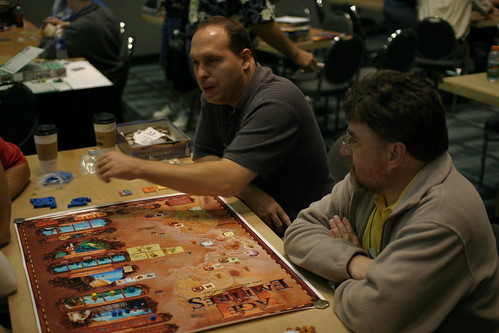 That's it for me this year - wish I had been able to spend the whole weekend there. Thanks to Funagain Games for the badge, to Rick and Tom for hanging out with me so much on Wednesday, to Valerie and Tyler for hosting us for BBQ on Wednesday night, and to everyone that sat down to play some games with me. Until next time…