Oh, so much more. I detest meta-blogging, but let me start by apologizing for the lack of content around here for a while. You've missed out on all the gaming that happened when the Ginns visited (though Jim blogged it), several playings of Twilight Struggle (awesome game that I hope to play again Saturday), and the rest of my trip to Israel. Time to play catch-up.

Side note: gaming actually started Thursday evening as the boys and I wrapped up our long-postponed game of Attack! the Expansion. I pulled out a narrow victory over Matthew, who made a surprising comeback and shocked both Jacob and me with his final point total. We played a slightly shortened game to 10 "eagle" cards.

While most of the the rest of our gaming group journeyed to Sunriver for Doug's semi-annual gaming retreat, those of us Left Behind decided to gather at my house for as much gaming as we could squeeze in. Ken and Brandon spent the weekend with us, with Ken taking a brief break on Saturday morning to run a Cub Scout meeting and the boys and I taking part in a Pitch/Hit/Run competition. We opened up the weekend on Friday night with the roleplaying game Cat - it was a huge hit and everyone is anxious for another play. It was the perfect end to a late night (we didn't even start until about 10pm as the boys had baseball practice that evening) with everyone being a little punchy and tired.

Saturday early afternoon we started our big game for the weekend - Conquest of the Empire II. This was a much-appreciated gift from the Ginns that fell onto my wishlist after I traded away Struggle of Empires. I was certain this game would have the right mix of depth, theme, and components to delight my family and friends and I wasn't disappointed. 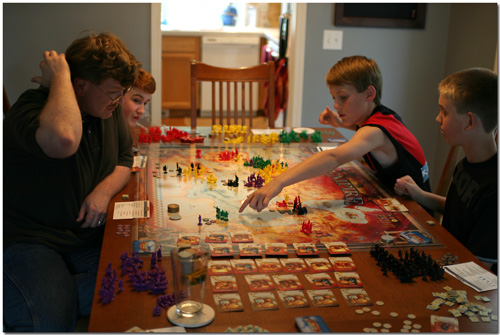 We played game II - the more strategic Martin Wallace / Glen Drover game that features alliances, cards, and 2-action rounds that kept downtime to a minimum. We found ourselves using a narrow strip of the map (surrounding the Med) which I suspect isn't unusual for this game, and the game was tight and fun through the end. We called it after three ages so that we could continue playing other games after Peter and Eric arrived.

I was surprised at how approachable the game was for Matthew. The money management was difficult, but I think he learned his lessons and would be much stronger in a second play. We had a healthy dose of diplomacy and influence going on in the game… much healthier than the conflict I often see when we play games of this sort.

While I cooked up some dinner for everyone Peter, Eric, and Ken played Peter's construction of Schact's InterUrban. Don't know much about the game - looked like a deeper Carcassonne-style game. 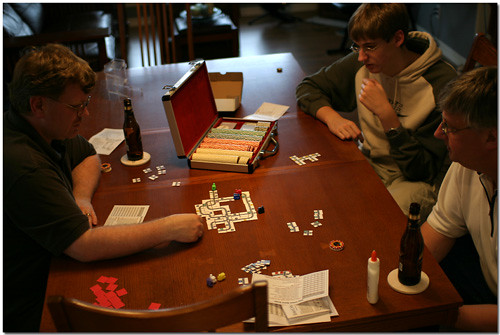 KC arrived at the tail end of dinner and we brought out Peter's copy of Vegas Showdown. The buzz is escalating on this game as it shows some staying power with gamers despite the Hasbro / WOTC heritage, and I can see why. The game is compared to Amun Re and Princes of Florence and I think it holds up favorably. Peter dominated the game from the start, getting some early cashflow advantages that left us scrambling to keep up and losing out on bids. This is probably going on my purchase list. 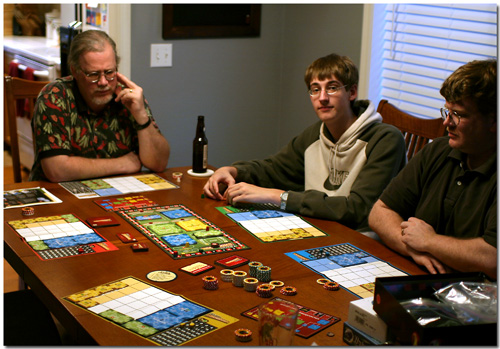 Even after the crowds left Saturday night, Ken and I persisted. We decided to knock a few 2-player games off my burndown list. First up was the George Parker classic Chivalry / Camelot. While not a game I would play often, there is some real depth to this game and you can really get caught with your pants down if you don't pay attention (ahem… thanks Ken). The pieces move similarly to the kings in checkers, but there are some special knight pieces that can jump their own pieces before jumping (capturing) enemies. You also have the option of moving a single piece to a single square, keeping the entire board reachable by any piece. 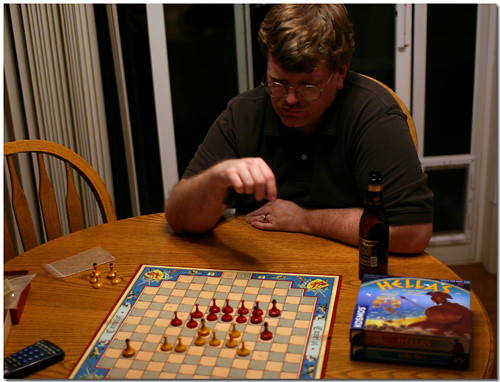 The end game can drag a bit and I ended up resigning before we let it go that far. Worth a try if you can find it.

Next up: Tally Ho. I'm not sure where or when I got this game, but I know it has been on my shelf for about 2 years unplayed. This is an asymetric tile flipping / moving game that was entertaining if a bit one-sided. Maybe this is why we are supposed to switch sides and play again… or maybe I just stink at it. This will be a fun one to play with younger kids.

On Sunday morning Mike joined Ken and me for his first play of Parthenon. I raved about this game last year but my opinion has dropped a bit, mostly due to the lack of player interaction and luck factor. For example, in this game I found a wool shortage harbor card on my first turn (I happened to be the big wool producer) and this launched me into a significant lead early in the game, allowing me to finish my 2 wonders about mid way through the second year. Now of course Ken and Mike made me pay for this fortune by keeping me out of the Archon role and punishing me heavily with events in the second year, but a string of bad cruises across the Med by Mike kept them from catching me. I know I came away with a not-so-satisfying victory and Mike wasn't impressed with the game. 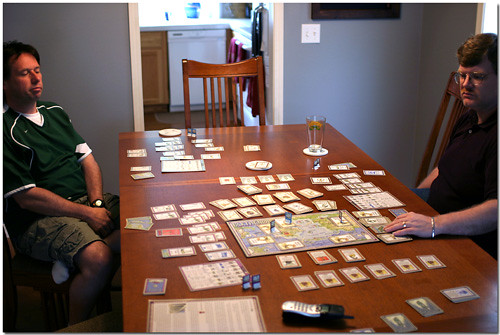 Ken still maintains that it is his kind of game and I certainly will continue to play it with the kids, but I'm less enthused about it.

While we played Parthenon, Graham joined the boys for a 2v2 game of Duel of Ages with a few expansions. Apparently Jacob and Brandon came out on top. 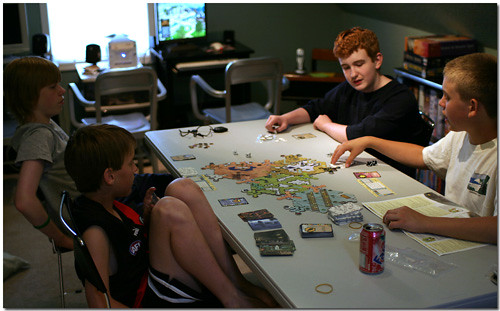 Our last game of the weekend was Tycoon, a game I had been trying to play again since my initial play in Arizona nearly three years ago. We had a bit of rules confusion early on but quickly got started. Mike and I made crucial money management mistakes in the first season, forcing us to return home for a loan just as the season was running out. I think this is a bad thing to happen, and it certainly kept us behind the curve. 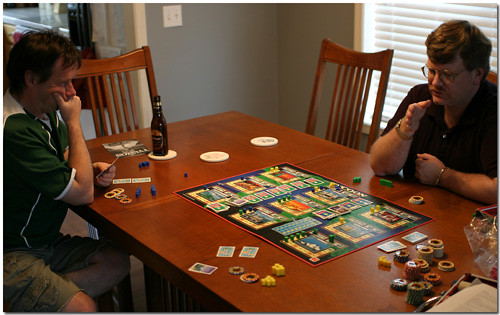 Mike responded very well, taking apart Ken action by action and ending up the victor by a narrow margin. Fun, relatively quick game (for the depth) if a bit dry. I also think the game is better with four people as you get a little more action and competition for spaces in the cities.

Missing Sunriver was a bad thing, but such a full weekend of gaming made up for the loss. Thanks to everyone that joined us.