There's been a dearth of game playing in my life for the past two weeks. Mucho travel (I guess I should post some pictures of Brussels and Amsterdam), some late hours working, and other extracurricular commitments have pushed gaming to the background.

Last Sunday I managed to convince Jacob and Matthew to join me in a game of Torres. Now technically I've played this before on Boite Jeux (against Mark I think), but I was so lost that I decided not to give myself credit for a play. I picked up a German copy at last year's Essen Spiel fair. In hindsight, I wish I'd spent a bit more and purchased an English language copy. The cards are pretty language dependent (albeit iconic), making it a bit challenging for the boys. 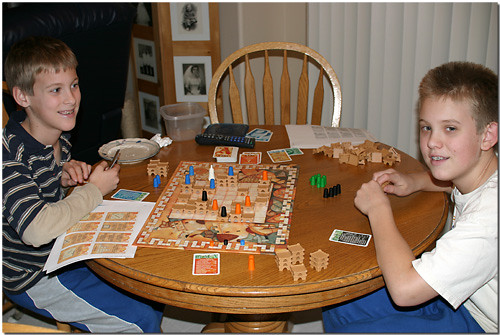 We didn't have a reasonable grasp on the strategic concepts of the game until we were half-way through the second round. We also missed the rule about passing through castles through doorways, but we figured that out by the third round. Jacob set me up a few times for big turns, allowing me to win by a healthy margin. A good game that I think I'll enjoy more with continued play, but not one I think the boys will ask for very often.

Tonight the four of us played Yahtzee Deluxe Poker, a game I picked up at a KB Toys close-out for about $3. Bidding, betting, and dice rolling sounded like a good combination, and I'm glad I picked this one up. The downside is that there's a decent likelihood of player elimination, but the game is short enough for that to not be a big deal. 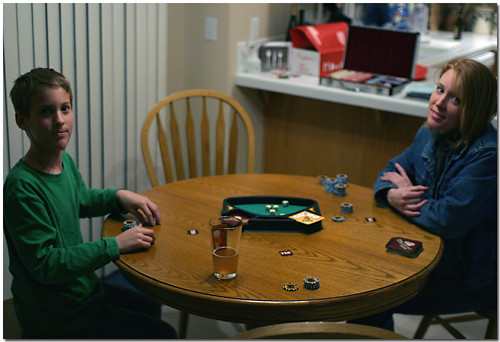 The basic idea in the game: seven bid cards are drawn randomly from a set of about 30 total. These are placed face-down in a stack, and the first card is drawn. Each card depicts an objective (e.g., roll a straight [1..5] with five dice in three rounds) and a payoff. Players bid in an open auction for the right to attempt the challenge. The highest bidder takes on the challenge, and the other players are allowed to place side bets on success/fail. The game was quick, exciting, had plenty of laughter and cheering, and was a solid exercise in calculating odds. Very much recommended, especially at that price point.

I finally managed to have a Friday in the office today, meaning I could attend a lunchtime gaming session. Four of us played Mystery Rummy: Jack the Ripper, a game I had only played with two players. This isn't a trivial game to teach, but we were underway within about 15 minutes or so. Michael jumped out to a big early lead and ended up with the victory, though Arron made a hard charge in the final hand to make it closer than anyone thought possible. I think the game's a bit too chaotic with four, and I understand the 2-player recommendation on the game box. I think Wyatt Earp would be a better choice next time with four players.