I recently made a commitment that I would post more about the role-playing game sessions I run. These don't happen frequently, but they are an important part of my family's gaming world so it does make sense to talk about it from time to time.

Sunday was a mostly open day, and I offered two choices to the boys - finish our saved game of Attack! or do a short session of Star Wars D20. They immediately opted for some role-playing action, which put me in a bind as I had no planned adventure for their characters (a rogue and a Jedi). Jacob was kind enough to do some research on the WOTC site and found a short one-shot adventure for us to play. 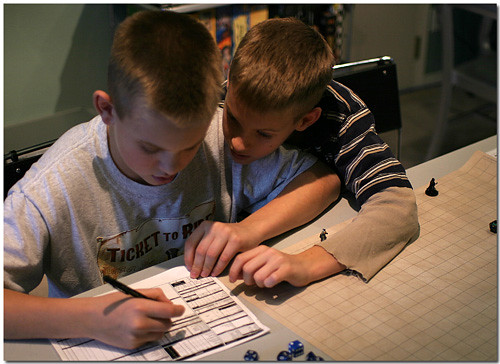 We used to play the old West End D6 Star Wars RPG (I played this in college and had all the materials) but switched to D20 once we became familiar with D&D 3.0. It really is easier on the kids sticking to a single system like D20, though don't think for a second that I'm not eager to try some other systems. I already have Thirty and Cat in the queue to try and am also very interested in Polaris.

This adventure turned out to be very short, almost too short, but was a nice way to get back into Star Wars and hopefully will lead to some more play in the near future. I've got a big RPG session planned for next weekend so expect to see some more on our D&D campaign next Sunday or Monday.

We drove over to the Rude's home around 3pm - I offered to help Ken setup his new computer and the boys sat down with Brandon to play with his new XBox 360. Ken and I managed to squeeze in a quick 2-player game of Attika. 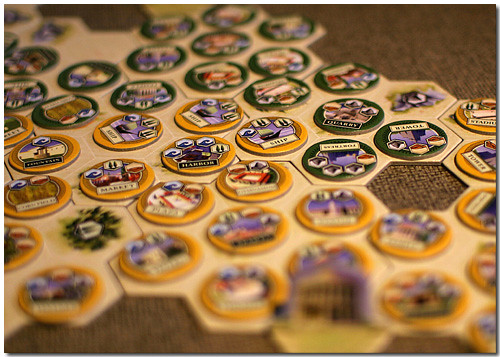 There were few to no opportunities to connect our temples, so it became very clear about mid-game that the first player to build out his building set was going to win. Attika is mostly about turn and resource efficiency and might be just a bit too dependent on luck of the tile draw, but I enjoy it nonetheless. I managed to jump on two map tiles Ken laid out by using several amphoras as once, consuming the best resource spots and effectively blocking him out of his freshly placed terrain. This gave me plenty of room to breath and allowed me to finish about 3-4 buildings ahead of him.

While waiting for dinner, the boys and I played a three-player favorite of mine, Wyatt Earp. Both boys managed to catch me off-guard in consecutive games, going out about 2 turns before I expected and snatching way too many points. 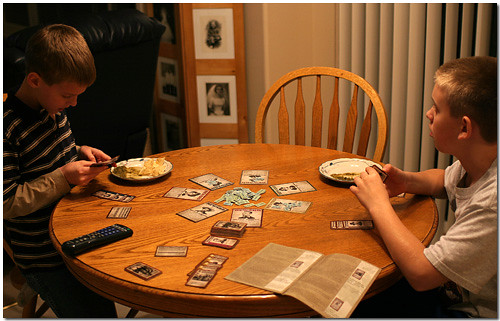