I made it to Mike's "South Tuesday" game night tonight, a good step towards meeting my New Years resolution. We had a great crowd of 9 tonight and decide to split into 5 / 4, and we would remain in those groups for the evening.

Doug, Chuck, KC, and Rita started things off with Tal der Könige, a game I enjoyed very much when I played at the coast about 10 days ago. Don't know much about how this play went but it did look like everyone had fun. The game lasted about 90 minutes. 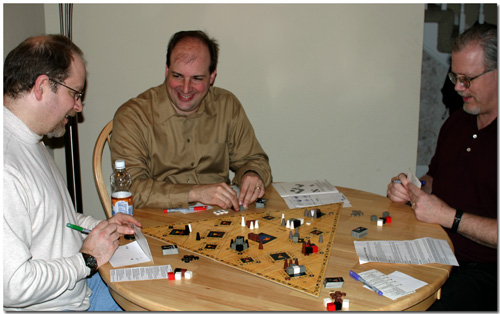 Mike declared tonight a "classics" night and suggested the Splotter game Bus along with a few others. There was a bit of debate about whether or not Bus qualifies as a classic, but I was certainly eager to play it again face-to-face. I've played it 2 or 3 times live before, and about 10 times on Spiel-by-Web. Only Mike had played before, so the first 15 minutes involved explaining the game to Carey, Tim, and Eric. 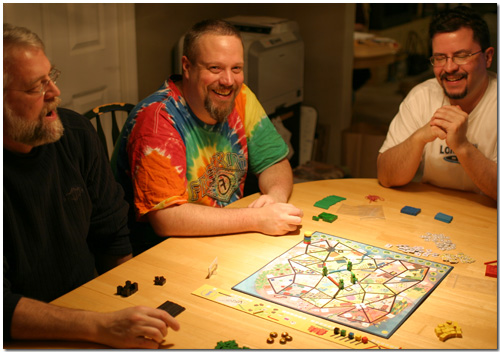 The game is a brain burner and it is very easy to make (often crippling) mistakes. There are so few opportunities to score points in a five player game due to congestion and player chaos that a missed chance or misplayed can easily take a player out of contention. This makes it fairly unforgiving for new players. Carey chose the vroom action a couple of times when it turned out he could transport no passengers, probably because he didn't anticipate some of the other players' actions. This is a very common mistake that I still make, though I'm more likely to make suboptimal choices and not think a turn ahead. 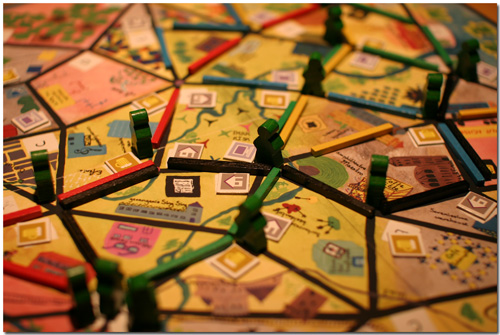 The game was very tight, with Mike burning his last cube thinking it was the last turn (there was going to be one more turn) and possibly missing a chance to be in contention. As it was, Eric and Tim tied for points (2 ahead of Mike, Carey and me, though Mike may have been ahead of us) but Eric winning on the tie-breaker as he had "earned" a stone by stopping time. A fun game that I'd like to see out more.

While we were finishing up Bus, the other crowd played some David and Goliath. 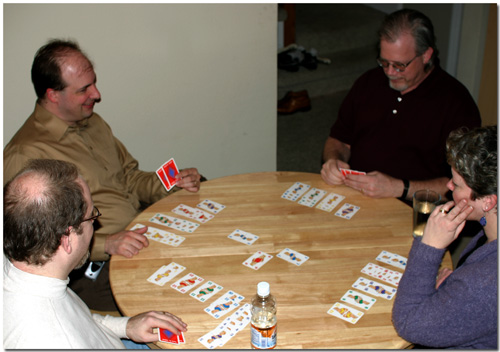 My last game of the night was 6 Nimmt, my favorite filler game of late. We had an interesting discussion about favorite filler card games, with titles such as Coloretto, Geschenkt, and 6 Nimmt getting mentioned. Coloretto wore out its welcome with me, and I'm not sure why. Maybe 6 Nimmt will do the same, but for now I quite enjoy it for what it is - a quick game with decisions to make but nothing too angst-ridden. I'm sure there are solid strategies to the game, but I use a few basic rules that keep decisions simple and I seem to win about half the time I play. Maybe I just get good cards. 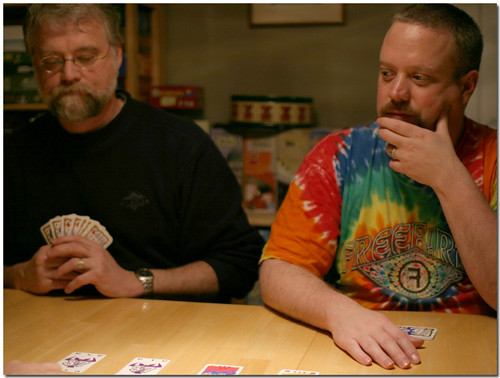 During 6 Nimmt the other group was playing (what else?)… Havoc! 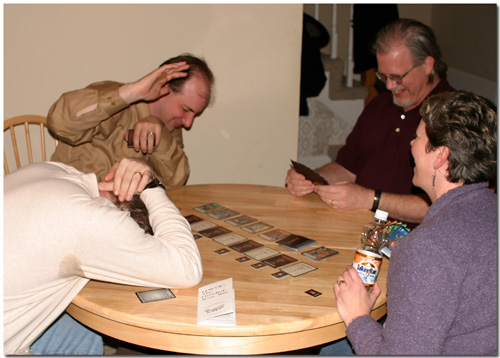 Saturday and Sunday should involve some RPG goodness out at the beach - I'll post some details about the campaign I'm running and chat a bit about how to play D&D with pre-teens.