Don't expect anything too earth shattering here, but it is an important lesson about the power of simplicity.

I volunteered to coach a Lego Robotics team for Jacob's school back in September, with Jacob on the team along with 5 other 4th and 5th graders. The team has been meeting weekly ever since, working on their solution to the Challenge 2005 - Ocean Odyssey. I took a very hands-off approach with the team, focusing on facilitating their own design and decision-making process by giving them some basic tools. We started with simple exercises to get familiar with programming and controlling the robot and gradually worked into the mission challenges. Eventually they settled on four of the missions after prioritizing based on points and complexity.

Last Sunday was the big day - the competition where they joined 23 other teams (elementary and middle school) at Mentor Graphics HQ for the challenge. While the team had to give a presentation on some challenge we face with our oceans, the focus was definitely on the mission challenges with the robot. They had three chance to get their best score - each chance is a 2.5 minute trial where they attempt to complete as many missions as possible. 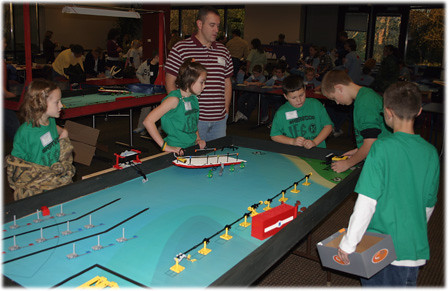 Given that the team only prepared to do 4 of the missions, their maximum possible score was going to be 156. The highest score for the day was about 310, with most teams scoring 125 or below. Their first trial saw them getting two of their four missions completed, scoring 89 points. The second trial was the highlight, with the robot completing all four missions and the only downside being a 2 point penalty for retrieving the robot away from base (this was to rescue it from doing something that would have cost them one of their missions - a great reaction). Their score was 154. You should have seen the looks on their faces! 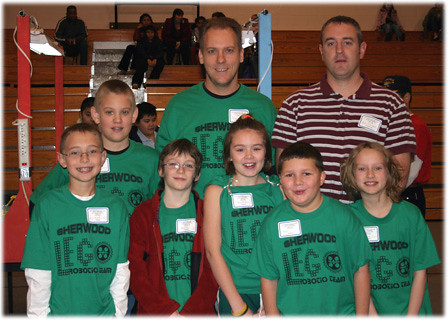 So what did I learn from the team? They reaffirmed my belief in the power of simplicity, the elegance of design for function without clutter. Their robot as designed likely could not have solved all of the mission challenges, but for the four they achieved it performed magnificently. There were no moving parts other than the wheels and they designed their solutions with a high degree of fault tolerance. They also built in an approach to running the robot that greatly increased the odds of success. If any of these kids participate next year I think they will likely move to more complex solutions designed to address more of the challenges (hinging arms, retractable hooks, etc.) but I'm thrilled with how they approached the challenge this year.