I worked a half day on Wednesday and we hit the road by about 2pm, arriving at the coast around 4pm. Surprisingly, we beat Jan and David here by about 30 minutes; they spent a decent amount of time shopping in the midst of their drive from PDX to the coast.

Last night the boys and I took a stab at Duel of Ages. I picked this one up from Doug and I thought it might hit a sweet spot with the boys. There are a few fiddly rules that we didn't get right until our second play today, but overall it was easy to dive right in and play. Matthew and I took on Jacob with four characters on a team. The luck went Jacob's way for the first 2/3 of the game and it looked like Jacob would run away with a victory. The dice started rolling our way and Matthew and I made an amazing comeback (we were down 3-1 I think), partly due to an ill-advised attack by Jacob which allowed us to tie the game just before time ran out. We entered sudden death and Matthew and I were able to advance one of our guardians to pull out the victory. The boys (and I) came away from the game eager to play again, and we were able to get in another play today with David. 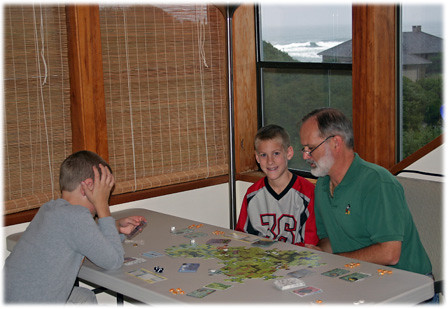 Before that play we tried a 6-player game of Pickomino (aka Heckmeck Am Bratwurmeck), a game Julie chose and brought home from Essen. This is a fun little press-your-luck dice and collection game that has a nice amount of take-that and we found to be quite enjoyable.

This afternoon we played 2v2 Duel of Ages with David and Matthew defeating Jacob and me soundly. We fixed a few of our mis-played rules this time around - we weren't doing separate rolls for damage, instead using the attack roll to also determine damage. Our fun didn't diminish at all in the second playing so now I suspect I'll need to anxiously go out and get all of the expansions. Where should I start?

Julie and Jan once again prepared a tasty Thanksgiving turkey with great side dishes. Extremely well timed as well, as we sat down just as half-time for the Cowboy game started. You'd think they had been trained by the Boni Maroni. 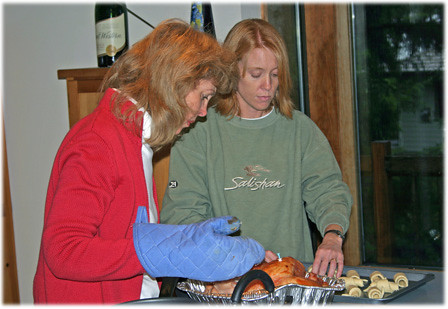 Jacob was checking out the weather outside to see if it was still raining, and noticed a salamander sitting in the pine needles just outside the window. He decided to venture out to bring him in out of the cold - he was quite sluggish as you might expect. Matthew of course had to wear it. 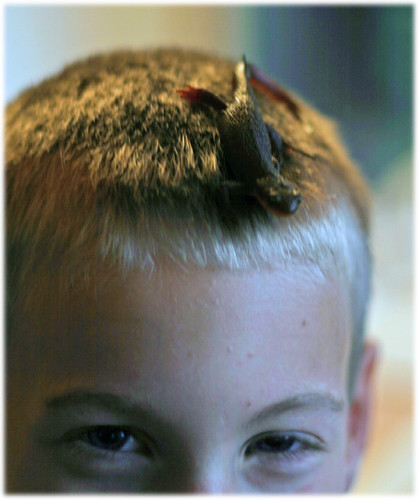 Here he is on Jacob's hand. 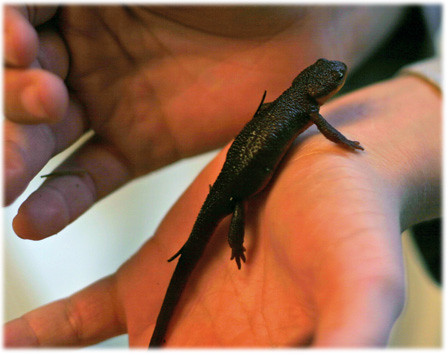